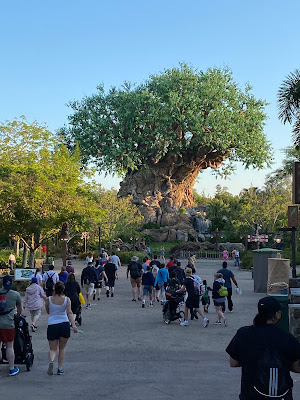 We’re going to be looking at park strategies for all four of the parks at Walt Disney World.  These strategies will assume two things – one, that you’re not staying on property, and therefore can’t take advantage of early theme park entry.  And two, that you will NOT be purchasing Genie+ or Individual Lightning Lanes (ILL) for anything during your day.  These assumptions might not be true – in fact, I gather that at least one, if not both, will be false for the average person reading this. However, I wanted to write this from the perspective of a regular guest showing up and trying to accomplish what they want without any particular advantages.  If you are participating in either of the above, the strategy becomes a lot easier.  This should cover the basics either way.  Today we’ll be discussing Disney’s Animal Kingdom (DAK). (Updated October 26, 2022)

I’m leaving out any of the animal trails around the park, which are self guided walks around certain areas.  Similarly, I’m also leaving out Rafiki’s Planet Watch, which is an “edutainment” section devoted to animal care and conservation.  Finally, I’m ignoring the shows that have performances at set times (Festival Of The Lion King, Feathered Friends In Flight and soon the returning Finding Nemo: The Big Blue and Beyond).  If you arrive a little before show time, you should have no issues getting in to see a particular performance.  It’s Tough To Be A Bug, while a show, is listed on the official and unofficial wait time apps and the performances run one after the other; that line can back up on busy days but is usually one of the lowest at the park. That will be included here.

Animal Kingdom is an interesting park, strategy wise.  It is the largest of the Walt Disney World parks by area, though much of that is in the animal trails that many people choose not to do.  Either way, during our recent trip, we logged the most steps the whole week in this park.  It also typically opens and closes the earliest.  And with so few attractions, many people consider it to be a “half day park” – you may consider it the same, and earmark this as a good park to start a day of park hopping.  Or you can take it at a more leisurely pace and get more attractions done in the late afternoon, when many of the early guests that day have finished and gone elsewhere.  Personally, I think it’s a shame that so many people leave DAK early as it is a beautiful park at night, especially the Tree Of Life and the Pandora section.  But these lower crowds can work to your advantage.

The elephant in the room so to speak (sorry! Animal puns!) is Avatar Flight Of Passage, which is not only this park’s signature attraction but is one of the very best and most impressive rides in any of the Disney parks.  I personally have it as my number one attraction, though obviously this is subjective.  I mention this here because if you are rope dropping Animal Kingdom, the overwhelming majority of people there in the morning are headed towards Flight Of Passage.  If you are staying on property, this would be my recommendation as well, as long as you’re there early enough before park opening.  But if you’re off property, as we are assuming in this hypothetical walkthrough, then this is an objectively bad use of your time, as you will be behind all of those guests as well as the offsite guests who head to Pandora regardless of how many other people are going that way.

Genie+ is almost never needed for this park, but you could theoretically use the money you would have spent on that to purchase an ILL for Flight of Passage.  That is the definition of buying your way out of a line, as you can work at a much more relaxed pace.  If you're doing that, I would still head to Pandora first and rope drop Na'vi River Journey.  But again, I'll assume that is not the case for the purposes of this guide.

Instead, go against the grain and go right once you reach the Tree Of Life.  You can easily hop on Expedition Everest with virtually no wait.  In fact, if you wanted to, you could probably ride this one two or three times before you even have to wait more time than it takes to walk through the queue area (though for me, this is a “one a day” ride – I have a post on motion sickness that touches on this..  Doing this one multiple times in a row is a bit much for me!).  From there, venture into Dinoland and ride DINOSAUR, which should also have little to no wait, even if you did Everest multiple times.  DINOSAUR can have somewhat long waits mid-day, and this is a good way to get around that.  TriceraTop Spin can also be done here (or at any time, really) if you have kids that are so inclined.  This ride almost never has a wait but you’re also probably not coming back to Dinoland later, so take care of it now to avoid long walks.

You have some options at this point.  Kilimanjaro Safaris would be a good choice here if the line hasn’t gotten too bad yet, but you’re about as far away from Africa as you can get in Dinoland and it’s a fairly long walk.  Wait times for the Safaris usually level off early and then decrease in the late afternoon (like many rides at this park), so you can save this for later.  If you really want a unique experience, wait for the sun to go down, as there are different animals to see at that point.  I’d actually recommend riding in both the daylight and after sunset as time allows.

You can probably finish up anything on this side of the park now, including Kali River Rapids and It’s Tough To Be A Bug, as well as any shows that you can time to fit in.  Lunch is never a bad idea during this time either.  Animal Kingdom doesn’t have a tremendous amount of table service restaurants but they do have some great quick service options including Flame Tree Barbecue and Satu’li Canteen (a personal favorite).  If you’re in Pandora for the latter, check out the line situation at Na’vi River Journey.  That’s a tough one to fit in but you might get lucky here. 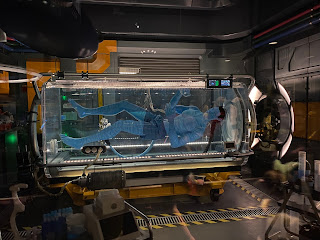 At this point, you’ll have a couple of the headliner attractions left over.  Depending on the time and your preference, I’d recommend doing Kilimanjaro Safaris before working your way over to Pandora for Na’vi River Journey.  If the park is beginning to empty out, you should be able to do these with only moderate waits, as the data suggests.  That really only leaves Flight Of Passage, which is where we started this guide. If wait times aren’t bad, fit it in where you can (perhaps more than once!).  If it still looks too long, you can follow the old strategy of getting in line right before park closing and just waiting it out.  Thrill Data suggests that this will have the lowest wait times since rope drop, plus you get the benefit of enjoying Pandora at night.

In general, you should either arrive early (especially if you're staying on property) or alternately, come late for Animal Kingdom.  Most people start their day here and hop elsewhere, but if you do it in the opposite direction, you'll more often than not be faced with lower wait times as the crowds disperse in the late afternoon.  If you only have one day here, this can be a risky strategy as you don't want to risk a ride being down, but it is a way to avoid the heaviest of the crowds.

As we said earlier, Animal Kingdom is an interesting park to work with but there should be little trouble getting to everything you want to do.  If you end up being done early, this is definitely a good park to hop from – for a really full and long day, Epcot is a good park on the second half of your day, since it’s often open the latest.  Animal Kingdom is often treated like the “fourth best” park in Walt Disney World but it has a bunch of great stuff for all ages and can be enjoyed at a leisurely pace compared to most of the others.