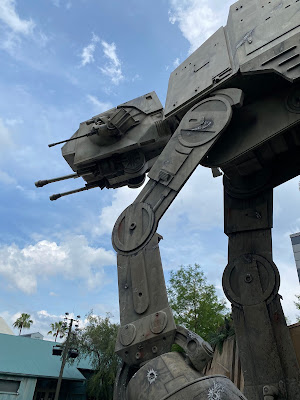 We’re going to be looking at park strategies for all four of the parks at Walt Disney World.  These strategies will assume two things – one, that you’re not staying on property, and therefore can’t take advantage of early theme park entry.  And two, that you will NOT be purchasing Genie+ or Individual Lightning Lanes (ILL) for anything during your day.  These assumptions might not be true – in fact, I gather that at least one, if not both, will be false for the average person reading this. However, I wanted to write this from the perspective of a regular guest showing up and trying to accomplish what they want without any particular advantages.  If you are participating in either of the above, the strategy becomes a lot easier.  This should cover the basics either way.  Today we’ll be discussing Disney’s Hollywood Studios (DHS). (Updated October 26, 2022)

A quick note on the above - even moderate wait times at this park can be a burden.  For October 2022, the top SEVEN rides here all averaged over an hour during the day.  That's a lot to work around.  Tower of Terror recently underwent a refurbishment that closed one side of the ride, effectively doubling the wait time.  I'm not sure if they're now working on the other side, because it is still one of the highest waits in the park (eclipsing even Slinky Dog Dash on average).  On the other hand, Runaway Railway seems to have settled into a nice groove now that it's not as new.  But as I said, don't expect it to be short in comparison with other parks.

Hollywood Studios is one of the hardest parks to strategize for.  In large part, this is due to the attraction lineup being very top heavy.  There are a lot of newer and very in demand attractions at this park, and currently not a lot of crowd eater type shows and attractions to disperse everyone.  Thankfully, character meet and greets are back, as well as Beauty & The Best: Live On Stage, the Indiana Jones Stunt Spectacular and For The First Time In Forever: A Frozen Sing-a-long. These things should at least help spread the crowds out so that they’re not waiting for one of the five or six big attractions at the park.

I mentioned above that this strategy guide would focus on guests not staying on property and not purchasing Genie+.  However, if you are going to attempt to get most of these attractions done in one day, either of those other two options are pretty appealing when it comes to DHS.  Nevertheless, we will proceed here as if you aren’t doing these things and we’ll see what can be accomplished in a normal day.

One of newest and most technologically impressive attractions at Walt Disney World is Rise of the Resistance.  At one point, this ride was using a virtual queue system.  Now, the only options are standby or ILL; not surprisingly, this ILL is priced the highest and also sells better than any of the others at any park.  There is still tremendous demand for this ride, and with good reason – it is an absolute must do.  If you had been staying on property, this would be my recommendation to rope drop.  Purchasing the ILL for this is also a possibility, as is getting in line before park close, though you then run the risk of this (often unreliable) ride not running.  I wouldn't chance it if it's your only opportunity to do this one.

If you’re near the front of the pack at regular rope drop time, I would make a beeline for Toy Story Land to hit Slinky Dog Dash.  This is often the second most popular attraction at the park, but if most people are running to Rise, you have a shot of getting on and off of this quickly.  Rise of the Resistance is a long experience start to finish, while Slinky Dog Dash is only a short roller coaster, so if you can get on it right away, you’ll be able to hit your next attraction almost immediately.  While you’re in Toy Story Land, I would head right to Toy Story Mania and then Alien Swirling Saucers, in that order (or just skip the latter unless you have younger kids who like a spinner ride).

At this point, if you’ve managed to get that section of the park done early enough, you should still be able to catch one of the other heavy hitters before the wait times get out of control.  You can either continue on through Toy Story Land (out the side with Alien Swirling Saucers) and head into Star Wars: Galaxy’s Edge to ride Millennium Falcon: Smugglers Run, or you can turn back around and go back to Hollywood Boulevard to do Mickey & Minnie’s Runaway Railway.  I’d check the wait times on both and see which makes the most sense at the time.  Whichever one you choose, save the other one for late afternoon. 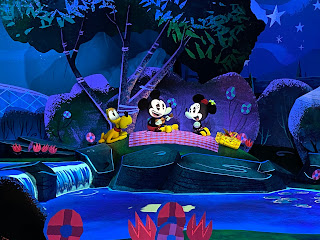 From there, you can make your way down Sunset Boulevard to try your hand at two of the park’s biggest thrill rides – Rock N Roller Coaster and Tower of Terror.  You’re probably at the point where lines for everything will be long, so be prepared to wait. I wouldn't personally prioritize Tower of Terror over what you've already done, but your mileage may vary.  That one, along with either Millennium Falcon or Runaway Railway (whichever you didn't do) are good candidates for Genie+.  While you’re in this area of the park, stop in and watch Lightning McQueen’s Racing Academy (a pretty fun little show even if you don’t have little kids, and a good air conditioning break to go along with a seat).

At this part of your day, you’ll probably want to take a more relaxed pace – get a snack or lunch, see a show or two (depending on what’s available) and do some of the less popular attractions. Star Tours has been overshadowed by the newer Star Wars themed attractions but it’s still a fun ride and you’ll only have to wait a fraction of the time compared to Millennium Falcon. Speaking of which, the late afternoon hour is a good time to pick up whichever of the rides we discussed earlier that you didn’t go (Millennium Falcon or Runaway Railway).  You can expect a wait but often, there’s a bit of a lull there before dinner where it won’t be too terrible.

Hollywood Studios typically closes around 9:00 nowadays, so make sure you grab some dinner and take in the neon lights as the sun goes down.  Many people will have accomplished what they wanted to and have left; conversely, there are also people who will have hopped to DHS to hit some of these big attractions.  Until recently, there was no nighttime spectacular at this park, but with Fantasmic returning, this should spread some of the crowds out during the day.  I would absolutely watch that show, as it is my favorite current nighttime spectacular, but you might need to prioritize something else ...

The last thing left to accomplish , if you didn't rope drop or ILL it, is Rise of the Resistance.  The wait times tend to drop off slightly as the evening wears on.  Plus the posted wait times are often inflated, especially towards the end of the day to discourage people from jumping in lines right before park close.  But that’s definitely something you can do here – if you’re in line before the official closing time, they will let you get through the line and ride.  This essentially extends your day (for “free”) and gives you more time to fit things in. As I said earlier, this is a risky strategy given this ride's reliability issues. You could also pay to ride this one individually - it's the top (and often only) attraction we would even give a halfhearted endorsement to, in terms of paying for.

That about sums up a day at Hollywood Studios.  The average wait time at that park is quite long so you might be spending more of your day in lines than you wanted to.  Again, I’m not here to shill for Disney and get you to buy Genie+, but if there’s a park where it could be useful, it’s likely this one (and Magic Kingdom, but for different reasons).  Keep in mind that you can no longer purchase Genie+ ahead of time for the length of your trip, but you can purchase for whatever day or days you want so if you're interested in saving some money, use Genie+ strategically.  Hollywood Studios can be done without, but it requires a lot of commitment and probably a lot of standing in the hot Florida sun.