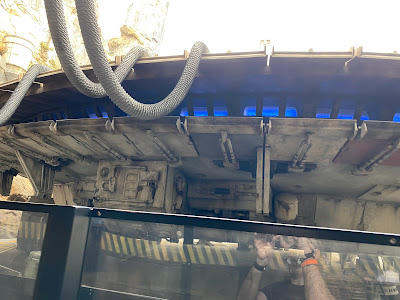 According to Google, one out of three Americans get motion sickness at some point.  This seems pretty low to me, as “at some point” can mean almost anything.  I know I could never read in a car without feeling motion sick.  But in my younger days, I could tolerate just about any amusement park ride with no difficulty.  Of course, being able to do something and having the desire to ride something that picks you up and spins you around are two different things.  I tended to avoid incredibly intense rides, so maybe I always would have been motion sick.

But as I’ve gotten older, I see that my tolerance for being thrown around like a rag doll on a roller coaster has certainly lessened.  Thankfully, my kids don’t seem to suffer from the same fate (yet …).  So I got thinking about Walt Disney World, and what rides to watch out for if you suffer from any kind of motion sickness.  I also have some thoughts about how to avoid or lessen the effects and how to work your day around these issues.  Nauseous people of the world, this one is for you!

Obviously, everyone is different, so not all of this will apply to everyone.  But I’m hoping to break down some areas where you might have an issue.  I’m going to divide this into three different sections – spinning rides, roller coasters and motion simulators.

As the name implies, these are rides that spin around in a circle, over and over again, until the ride comes to a close.  These tend to be more for littler children (because kids love to spin around?) and often have shorter lines.  This makes them way easier to skip, especially if you have a second adult who can take the kids while you sit it out.

At Magic Kingdom, these rides would be the Magic Carpets of Aladdin, Prince Charming Regal Carrousel, Dumbo The Flying Elephant, Mad Tea Party and the Astro Orbiter (I left out Buzz Lightyear’s Space Ranger Spin because, even though it says “spin” in the title, it has less of the repetitive spinning motion associated with the other rides here.  You can manually spin your vehicle though, so it’s possible to feel the same effect).  Of these, I always tend to skip Mad Tea Party, as it seems like the most violent spins of any of these rides.  Also, that ride, along with Magic Carpets and some others, allow the guest to control at least some of the motion and my daughter loves nothing more than to laugh maniacally and make the ride as out of control as possible.  Your situation may differ.

Since many of these rides are designed with children in mind, it makes sense that most of these are in Magic Kingdom.  Epcot doesn’t have a true spinner, but Hollywood Studios has Alien Swirling Saucers and Animal Kingdom has TriceraTop Spin.  That latter one is most similar to Magic Carpets, just with dinosaurs instead of carpets as ride vehicles.  I did let my daughter talk me into going on Alien Swirling Saucers with her and … well, I survived. That’s probably the closest to the Mad Tea Party that I’ve gotten and the ride vehicle is pretty interesting for a spinner.

All in all, what you see is what you get from these rides.  I tend to do okay on these in general because even with the repetitive motion, these rides tend to not last too long.  Try not to go on any of them back to back though or your equilibrium might be off for a while.

These are also pretty self explanatory – I assume you’ve either been on a roller coaster in your life or at least SEEN one.  There are obviously varying degrees of speed, height and maneuvering involved but if you don’t like that “stomach drop feeling” as my daughter would call it, it almost doesn’t matter if it’s a coaster designed for kids or not.

Walt Disney World isn’t the coaster capital of the world, but there are plenty around – Magic Kingdom sees Big Thunder Mountain Railroad, The Barnstormer, Seven Dwarfs Mine Train and Space Mountain.  Epcot has their first coaster in Guardians of the Galaxy: Cosmic Rewind, and I think Test Track qualifies in this case. Hollywood Studios is home to Slinky Dog Dash and Rock N Roller Coaster Starring Aerosmith, while Animal Kingdom has Expedition Everest.

Each of these is different in its own way.  I found myself feeling queasy after Slinky Dog Dash, mostly because of its quick up and down motions.  Seven Dwarfs Mine Train is probably the smoothest of these coasters, as it was designed only a few years ago and features a ride vehicle that rocks from side to side, blunting some of the impact of the turns and climbs. In contrast, a ride on Space Mountain is an invitation to be battered repeatedly in your seat for the duration of the ride.  It’s a classic, don’t get me wrong – you just have to know what you’re getting into.

This the widest category, with so many different types and no two being exactly alike.  As the name implies, on a motion simulation ride, you sit in a relatively static place while the action on a screen in front of you simulates movement, so you can soar through the sky, outer space, etc.  These can be the trickiest in terms of motion sickness, as your equilibrium can be thrown off as you’re watching something on a screen that is impossible to achieve outside the confines of the ride. They’re also why they can be so fun.

Magic Kingdom doesn’t have a true motion simulator, but they are everywhere else around Walt Disney World – Epcot has Mission: Space, Soarin’ Around the World and Remy’s Ratatouille Adventure (not to mention 360 degree films like Impressions de France and Canada Far and Wide, neither of which qualify here but can certainly be disorienting as you watch them).  Hollywood Studios has Mickey & Minnie’s Runaway Railway, Star Tours – The Adventures Continue, Star Wars: Rise Of The Resistance, Millennium Falcon Smugglers Run and Toy Story Mania (though it’s a shooting game, you need 3D glasses and are looking at screens, so I think it qualifies).  Animal Kingdom only has one, but it’s a doozey – Avatar Flight of Passage.

All of these rides are not created equally, though they all have at least generally similar ride concepts.  Soarin’ is a gentle flight over world landmarks, while Flight Of Passage is like Soarin’ on steroids, as I call it, where you’re racing through Pandora on the back of a banshee.  One simple trick if you’re feeling motion sick on any of these rides – close your eyes.  Since you’re often not actually moving very much, shutting out the stimulus of the screen can help to quash any nausea you may be feeling. 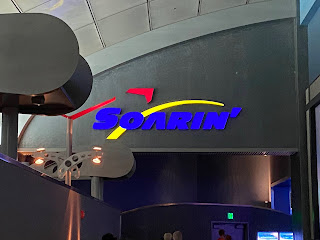 I’ve found Hollywood Studios to be the trickiest park for motion sickness sufferers, and largely because of the amount and types of rides there.  No single ride or activity makes me feel sick, but a certain combination of rides in a row can really do me in.  On that particular day, we rope dropped Slinky Dog Dash, which already had me feeling a little off. Then we raced over to Toy Story Mania and since there was no line, we were spinning around only a few minutes later.  We then headed to Millennium Falcon Smugglers Run and though there was a longer line where we could rest, I still wasn’t feeling quite myself and by the time we rode, I was nearly done in.  I won’t give you all the gory details but I came off of that ride with hot sweat running down my back.  Let’s leave it at that. Side bar to this story – we came back to Hollywood Studios a few days later and re-rode Millennium Falcon and I was totally fine.  I guess you just never know when it will bother you.

So what can you do if you’re at the Most Magical Place On Earth and you’re hit with motion sickness?  For me, it was a combination of things.  After that Hollywood Studios ride trifecta, we stopped and got a soda from Batuu and a Mickey pretzel.  The carbonation and bread combo helped calm my stomach.  I also popped some Dramamine there and from that day on, took one every morning before we left for the parks (they often have these at your resort, so have no fear if you forget at home).  I also had those motion sickness wristbands that press between your veins and help with nausea.

On our most recent trip, I used the Relief Band, which I had heard advertised on a podcast and wanted to try.  This is a pretty expensive investment, but for me personally, I found it worked wonders.  I'm not sure of the science behind it, but the tingling in your hand when using it is real and often seemed to do the trick for me.  I don't make any money if you purchase this (yet? Hit me up, guys) but I recommend it if you are prone to motion sickness.

In combination, all of these things helped, but the biggest factor is time.  Take a break if you need to.  I went too hard, too fast on that particular day and I should have been smarter about getting on another ride so soon after already feeling off.  Thankfully I recovered in time for our Rise Of The Resistance boarding group, as I wanted to enjoy that to the fullest extent.  That’s the best advice I can give in a situation like this – avoid what you can, prepare ahead of time and most importantly, take breaks if you’re starting to not feel so well.  No one can enjoy a trip to Walt Disney World if they’re feeling sick!