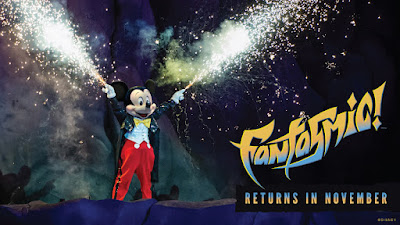 After what seems like forever, Fantasmic! (exclamation point included in the name of the show, though I'll refrain from using it going forward in this post, despite my excitement) FINALLY gets an officially announced return to Walt Disney World's Hollywood Studios - November 2022.  That's right, there's still no actual start date, but if it's being announced now, they must finally be confident in that time frame. [October 19 edit - official start date is November 3!  See below for more]

There isn't much more to this announcement but given my love of this show, I'm going to post about what Fantasmic is, the changes being made to it, what it means for the crowds at Hollywood Studios and some final lamentation about what possibly took so long.  Join me on this quest, if you will.

For those of you who are unfamiliar, Fantasmic is a nighttime show at both WDW and Disneyland (there had also been a version at Tokyo DisneySea that has since closed).  The WDW version takes place in the Hollywood Hills Amphitheater at Hollywood Studios, while the Disneyland version is on the Rivers of America.  The shows are/were similar, with some key differences that we'll talk about below.  From a guest standpoint, the biggest difference is that WDW's version is in a seated theater, while Disneyland's is a show you have to stand for.

The basic story is about Mickey Mouse and his imagination, leading the audience through spectacular visual effects and a great soundtrack, culminating in a battle against some of Disney's favorite villains (including Maleficent in her dragon form).  Some of the sequences might scare the youngest children, but it is largely a family friendly extravaganza and a great way to end your night at Hollywood Studios. I would go so far as to say the anticipation of sitting in that theater as the sun goes down, awaiting the start of the show, is one of the most magical moments you can experience at Disney.  If you need a refresher, take a look at this.

Disney World's version of this show opened in 1998, and had entertained audiences for many years right up until March 2020.  I think most people know where this is going - Fantasmic, along with everything else, closed due to the Covid-19 pandemic.  When Walt Disney World reopened a few months later, none of the nighttime shows returned.  The lagoon that surrounds the stage had been drained.  There was a very real possibility that we had seen the end of Fantasmic.

But things slowly returned to normal.  Both Magic Kingdom and Epcot not only had nighttime spectaculars return, they actually had new shows debut last October for Disney World's 50th anniversary.  The biggest difference, at least early on during the reopening phase, was that Fantasmic is a performer heavy show - safety protocols at the time didn't really allow for this to return, much like many of the daytime stage shows through Disney World.

Eventually, that situation improved as well, as Disney dropped the artificial capacity caps and social distancing markers.  Crowds could return, and indeed, shows such as Beauty And The Beast, the Frozen Sing-A-Long and Finding Nemo made their return.  Rumors of Fantasmic's return were certainly circulating around this time - I heard credible rumors that it would return for Easter/Spring Break season 2022.  That was more than six months ago at this point.

Fantasmic returned to Disneyland in May 2022 but things remained silent at WDW.  The lagoon was refilled, casting calls were put out, there was even a teaser on the Disney Tik Tok account.  And yet ... nothing.  Even D23 passed with no announcement.  At this point, it was a matter of "when" not "if" but still, what was the hold up?

I'm truly not sure why it took so long for the show to return.  The best guess is probably related to staffing shortages, which has plagued Disney (and many other places) for many months.  Even as character meet and greets have returned, for example, many of the "face characters" have been in short supply - both Cinderella's Royal Table and Akershus Royal Banquet Hall, home to princess meals in the past, have not returned to normal.  And there are plenty of face characters (princesses among them) in Fantasmic.

Even after all this, though, it's hard to be bitter about something so beloved making a return.  The new nighttime spectaculars have been relatively underwhelming, especially compared to their predecessors.  They could have put SOMETHING in that amphitheater, but I for one am glad it's Fantasmic and not a new show. 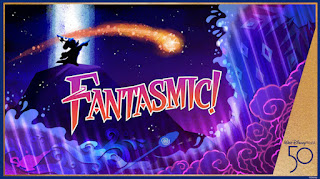 Will this be the same Fantasmic that was last seen in March 2020?  Based on official comments, the answer is no.  Some changes to the core story are happening - the long Pocahontas sequence that dragged down the middle of the show is rumored to be replaced.  Disney hasn't stated yet what exactly is replacing it, but official artwork was revealed a few months ago that showed symbols representing Aladdin, Frozen and Moana, so it's a good bet that these are now a part of the show.  [October 19 edit - Disney officially confirmed these new sequences, mentioning Aladdin, Frozen and Moana by name, as well as Pocahontas (likely shortened but not eliminated) and Mulan]

I'm normally a traditionalist when it comes to "updated" shows, but this sounds like a net positive.  I reserve the right to change my mind (and yell things like "get off my lawn") if it turns out this materially changes the show, but I suspect it will only make it better.  No need to reinvent the wheel here - Fantasmic was a little dated, but incorporating some more modern (popular) Disney movies into the framework of the show seems like it will take care of this problem.

One of the other benefits to Fantasmic's return will hopefully be a new distribution of crowds at Hollywood Studios.  Since the reopening, guests with park hoppers have generally followed a certain pattern - hopping from a park with no nighttime show (Animal Kingdom and Hollywood Studios) to one that did have a show (Magic Kingdom and Epcot).

For Animal Kingdom, this often meant lower crowds in the late afternoon, as you can accomplish everything if you're there for rope drop.  This will continue to be true now.  The story was similar at Hollywood Studios, but not exactly the same.  Due to the top heavy nature of that park, crowds were often massive early in the day (and I suspect this doesn't change rush to Rise of the Resistance or Slinky Dog Dash, for example).  Crowds were lower from dinnertime on, as there was nothing to hold guests there.

Now I think there will be a redistribution of sorts.  More people might take a "second half of the day" approach to Hollywood Studios - start elsewhere (or stay at the hotel), stack some Genie+ reservations for the afternoon/evening, then head over to DHS, do their attractions and stay for Fantasmic.  Hopefully this is a win for all sides in terms of crowds.

If I haven't made it clear, this is a great day for Disney.  There was no need for it to take so long, but now that it's finally coming back, we should rejoice that it's here again.  Fantasmic becomes the best nighttime show at WDW at this point.  Hopefully it sticks around for many years to come.