Happily Ever After - The last great nighttime spectacular? 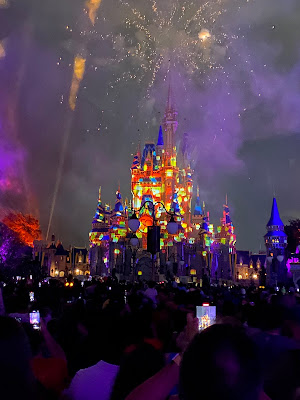 To kick off Walt Disney World’s Most Magical Celebration for their 50th Anniversary, two new nighttime spectaculars opened the same day, October 1 – Disney Enchantment in the Magic Kingdom and Harmonious in Epcot.  The latter was long delayed due to Covid, and though it could have debuted earlier in the year, Disney made the choice to unveil it the same day as their new Magic Kingdom show, presumably to draw some crowds away from their flagship park on what would be one of the busiest days in recent memory.

The debuts of these new shows were livestreamed on the official Disney Parks Blog YouTube channel and can still be seen anytime here and here respectively (those links aren't the “official” ones anymore – they seem to have disappeared into the recesses of the internet.  But you get the idea).  Since I wasn’t fortunate enough to be in the parks for the celebration, I eagerly awaited these sneak peeks when their aired.  And while I consider both “good not great,” I was hoping for much more.

That got me thinking about Happily Ever After, which was the nighttime spectacular that Enchantment replaced at the Magic Kingdom.  Happily Ever After was something of a white whale for me over the last few years.  When we first took our children in 2018, we opted not to stay and watch it on the nights we were at the Magic Kingdom – this was a mistake that I have long regretted!  Our reasoning was that they were young and staying up late all week after running around the parks each day. We had also planned to see the shows at Epcot and Hollywood Studios and I thought that too many of these would be overkill.

After we got back from that trip, I found Happily Ever After on YouTube and realized the error of my ways (seriously, see it for yourself and revel in its wonder).  We had already started to plan our next trip at that point (I’m pretty much always planning one, even if it’s just in my mind) and I wanted to make Happily Ever After a focal point of that trip. I even booked a dessert party because I knew it would give us the best spot to watch the show from, and I didn’t have to worry about tall people standing in front of our kids. We were very excited about this, and the trip in general.  That trip was scheduled for May 2020, and based on that date, I assume you know the end of this story.

We rescheduled that trip for April 2021, and while we went and had a wonderful time (as always), none of the nighttime shows were running at that point.  So yet again, we missed our chance to see the show. Soon after, Disney announced that Happily Ever After would be closing at the end of September so that Enchantment could debut.  I had been under the impression that HEA would return after the 50th celebration, but Disney’s press release specifically said that this would be the end of this show for good.  This might just be a clever marketing ploy or at least a “wait and see” approach as they wait for feedback on Enchantment, but if taken at face value, this was going to be the end.

We had a trip to Universal Studios Orlando scheduled for November but with some finagling and convincing of my wife, we managed to move that trip to September.  This worked out for a few reasons (the weather not being one of them!) but largely, I moved mountains to see Happily Ever After. Disney was running their After Hours Boo Bash event in the time we would be in Orlando, so we figured “it’s just money” and booked our tickets.  The event was a great success for the short lines and lower crowds but for me, the opportunity to see Happily Ever After and finally share it with my family was worth every penny. 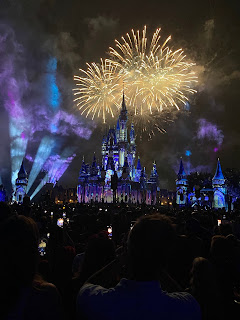 After watching this show so many times on YouTube and finally seeing it in person, I came to the conclusion that this was basically the perfect Disney show.  It had everything you could want – it was technologically impressive, had the great Disney soundtrack you’ve come to expect and more than anything else, made you FEEL something.  You can’t discount that intangible emotional quality that Disney offers, as it makes justifying their price tag easier.

With the new shows not living up to this standard, I began to think – have we truly seen the greatest Disney show of all time?  Is it all downhill from here?  I truly hope not – Disney always manages to push the envelope and develop newer and better attractions all the time.  There’s no reason that they couldn’t do that with their nighttime spectaculars.  So why do these new shows not reach that level? The biggest missing piece for me is the emotional aspect.  Neither Enchantment nor Harmonious gives me the chills that Happily Ever After did (the ending sequence of Go the Distance into Happily Ever After into You Can Fly brings a tear to my eye every single time).  Harmonious actually takes around four of the songs in Happily Ever After and uses them, but not nearly as effectively as they had before.  It would be odd to have both Happily Ever After and Harmonious using a bunch of the same songs at the same time. But did we have to sacrifice one to create the other?  There are plenty of great songs in the Disney catalog.

With Enchantment being the direct replacement for HEA, the questions regarding this new show really stand out.  For the 50th Anniversary, I could understand a new show that would honor the park’s history and be a celebration of our shared experience over the last five decades.  In fact, Tokyo Disneyland’s nighttime spectacular does just that for that park’s 35th anniversary.  But that’s not what Enchantment is.  In reality, it’s set up in the exact same way as Happily Ever After – an original song frames the Disney song medley in the middle, there’s a voice over to tell you about the themes of the show, there are fireworks and castle projections.  I’ve taken to calling it “Happily Ever After light.”  In HEA, each segment flowed into the next in a way that made sense.  Enchantment doesn’t have any of that, and even the songs are largely instrumental, taking away the sing-a-long aspect of the previous show. Something is missing, and it goes back to that intangible emotional feeling.  There far less “wow” moments, and while I’m sure it’s enjoyable to watch, it’s just not the same.

What really stings is that Happily Ever After really didn’t have a very long shelf life.  It had only debuted in May of 2017, so it only existed for about four and a half years.  Not only that, but it wasn’t running during the resort’s closure and early reopening period (mid-March 2020 through July 1, 2021).  That’s really not long for such a contemporary and technologically forward show.  The spectacular HEA itself replaced, Wishes, ran for almost fourteen years.  The fact that so few people, relatively speaking, got to see Happily Ever After is truly sad.

Based on the feedback I’ve seen on the internet, Enchantment is getting largely negative reviews.  I’m hopeful that Disney listens to this feedback and either brings back HEA or develops a show that has the heart and soul that it did for their next one.  If not, we really may have seen the peak of Disney’s nighttime spectaculars.