Guide to Having a Good Disney "Shirt Game" 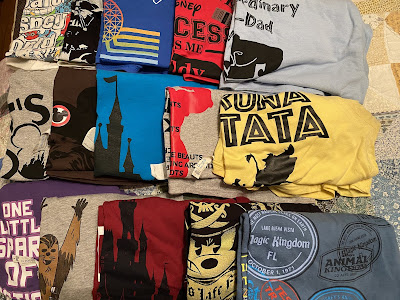 If you’re visiting Walt Disney World for the first time, you will probably be surprised to see just how many Disney related t-shirts are being worn throughout the parks.  As we all know, if you go to a concert, you should probably not wear the shirt of the band you are seeing that night unless you want to look like a total square (the exception would be a shirt you purchased at the show that night and put on over what you were already wearing – this is acceptable).  Conversely, if you go to a sporting event, most people will be wearing the apparel of their team.  This looks especially cool on TV for college football games, when 99% of the crowd is wearing the same color.

So where does Walt Disney World fit in to this spectrum?  It’s probably closer to the latter than the former.  I found this to be an odd phenomenon the first time we took the family, even though we came prepared with a couple of Disney shirts each.  But I felt a little out of place on the days when I DIDN’T have one on – I vowed not to make this mistake again.  So I stocked up and made sure I had at least one Disney related shirt for every day we would be in the parks on our next trip.  If you want to be cool and impress your friends (or at least other Disney park goers), let’s talk about what to do (and not do) on your next trip.

The first place to look for snazzy Disney attire should seem obvious – ShopDisney.com. Official Disney merchandise is ever changing and always worth looking through to see if anything strikes your fancy.  A lot of this same merchandise will be available in the parks themselves, but it’s always better to buy in advance and take advantage of any sales, credit card points, etc that you might have.  This is true of most merchandise but especially true for Disney, as you won’t find many “deals” in the Emporium or similar shops.

Even with any discounts, official Disney merchandise is always going to trend towards the more expensive side.  This is where you can stretch beyond the official and use the internet to its fullest extent and support independent creators.  The biggest and most notable place to start would probably be Etsy where you can apparently find most anything.  There are also Redbubble and TeePublic and probably many other sites that I’m not even aware of.  I usually just use a quick Google search to lead me to one of these, but maybe you have a particular preference or account that you use regularly.

In any case, these types of DIY internet markets are perfect for Disney shirts – it’s almost like they were designed with this purpose in mind.  You can support the little guy instead of the big corporate giant (they’ll get enough of your money when you visit!), the prices are cheaper and the service is usually very good and personal.  The best part is that you can find designs that are different than what Disney sells officially, often finding funny or irreverent shirts that can be much more unique and interesting than you could find at ShopDisney or the theme park gift shops.

One of the most common shirts you will see is the coordinated family shirt.  Disney sells some of these officially, but there are a ton more options available at those shops listed above.  You probably know this – they often have a picture of the Cinderella castle or Mickey Mouse, and often have personalized text written in the middle. This can be a person’s name (my personal preference is not to have my name on my own clothing but to each their own) or who they are in the family (Grandpa, Mom, etc).  Sometimes it will say “Smith Family Vacation” and the year.  I find these work better in large groups, as when everyone stands together for a picture, it really does look impressive.  I wouldn’t suggest using these to spot your party in the park if they get split up, though, as many people go this route with their shirts.  We’ve done a couple of family ones, sans names, as it’s a good way to commemorate a particular trip.  Some of our best “castle photos” include us in these shirts.

If you want to get more unique, though, there are plenty of other options.  Some people prefer a group shirt where everyone is wearing the same thing, just not a family one.  I saw a whole group of people behind us in line on our last trip wearing shirts that said When You Wish Upon a Death Star,  a good mash up of classic Disney imagery and Star Wars.  The most common shirt I saw on our last trip was a tongue in cheek nod to our Covid times – Social Disneying which is of course a nod to the social distancing practice we all followed for many months.  I found this one to be a little too on the nose for my tastes but I appreciate the attempt.  Frankly, I would try to avoid anything too obvious when it comes to your shirt game – if you think you’re being unique only to see ten other people with the same shirt, that can be a real bummer.

Personally, I prefer shirts that are inside jokes, or that require a little more knowledge to fully understand.  This goes for all walks of life, not just Disney – why have a shirt that just says Seinfeld when you can get one that says Vandelay Industries? That’s the approach I try to take for my Disney shirts wherever possible – my favorite one is probably one that says “If You Can Read This, Thank The Phoenicians” – if you don’t know that this is a reference to Epcot’s Spaceship Earth, it probably doesn’t make a lot of sense.  But I got a couple of compliments and questions about where I got the shirt when I was at Epcot on our last trip (side note – I also try to match the theme of my shirt to the park I’m going to that day, but that’s next level stuff).  In other words, if you know, you know. 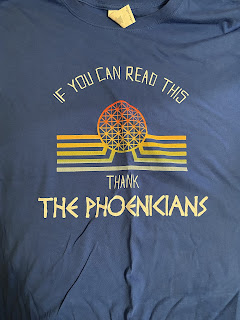 If there are any “don’ts” to your Disney shirt game, one would be to avoid anything lewd or suggestive.  This should go without saying, but there was a controversy recently about someone wearing a suggestive shirt and being told to leave the park or replace the shirt with something more appropriate.  I’m not generally for banning anything, but this is a family friendly environment after all, and discretion should probably be used.

Another pet peeve of mine when it comes to Disney shirts are the ones that are purposefully snarky or negative. Many people wear “Best Day Ever” shirts, but one trend I see in the parks is when someone (usually the father in the family) wears a “Most Expensive Day Ever” shirt, while the rest of the family wears the more traditional version. This implies that the person wearing the “expensive day” shirt paid for the trip and is only there for that reason.  We all know Disney is expensive – frankly, I don’t think you need a shirt that lets everyone know where the money came from.

One of my favorite things to do when wandering the parks is to keep an eye on what interesting shirts people are wearing.  It adds to the magic, in my opinion, when there are so many cute, funny shirts around.  We’re all there because we love Disney and it’s fun to see how people express that.  Keep an eye out next time and you might be inspired to pick up something similar for your next trip.  Even if it’s your first time, make sure your shirt game is on point and you’ll fit right in with all the regulars.