Traditional meet and greets began returning to Disney World in April (and by traditional, I mean where guests could interact with the characters directly instead of the pandemic-era distancing rules) and at the time, this was promised to be a gradual process.  Little by little things have returned to normal, and according to this post today from Disney Parks Blog, a whole bunch of more meet and greets are coming soon!

This post will look at what's coming back and talk a little about some of the things that still haven't returned, with some possible explanations.  More normalcy equals a better park experience, and all of these announced additions made me nod my head and smile.

The first big one announced here is that Mirabel from Encanto is going to be a part of the Disney Adventure Friends cavalcade at Magic Kingdom starting on June 26.  Cavalcades have been one of the positive holdovers from the pandemic era - at the time, they took the place of a full parade, so guests could catch these seemingly spontaneous character progressions without having to line up and stake out spots for an hour beforehand.  Parades have returned (most notably the Festival of Fantasy parade at Magic Kingdom) but cavalcades have continued.

I enjoy the cavalcades because they are one factor in making the parks seem more alive.  You could be walking down the street or waiting for an attraction, when suddenly these pop ups come right past you and are gone in a matter of minutes.  It's a little bit of magic during your day.  The Adventure Friends cavalcade is probably my favorite, since it showcases a lot of lesser used characters like Miguel (Coco), Panchito and Jose (The Three Caballeros) and Nick and Judy (Zootopia).  Except for rare special events, you never used to see these characters in the parks.

Adding Mirabel to this cavalcade is a win all around.  Encanto is exceedingly popular right now, which probably puts Mirabel at the top of the recognizable list when it comes to these characters.  The parks have been lacking an Encanto presence and while this isn't much, it's a good start.

Next on the list is the return of Minnie Mouse to the Town Square Theater on July 6, joining the recently returned Mickey Mouse meet and greet.  In the past, these two often met guests together so it's a no brainer to have Minnie back here again.  Mickey and Minnie also meet in Red Carpet Dreams at Hollywood Studios, but to me, there was no reason they couldn't both meet in the flagship park and now they will again (wearing their 50th Anniversary "EARidescent" outfits to boot).

There's also a mention of Peter Pan and Snow White returning to greet guests at Magic Kingdom starting July 10.  Once again, this is good news.  Some princesses have returned to meet guests, mostly inside Princess Fairytale Hall.  But outside of this, there are still relatively few characters in that park.  Magic Kingdom, of all parks, should have characters everywhere, and the return of Peter and Snow will be a big help. 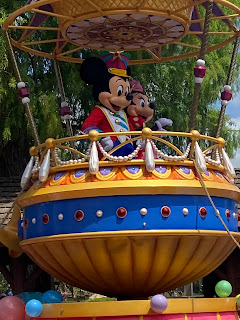 No specific dates are given, but the blog also makes a mention of these meet and greets returning to Magic Kingdom "in the coming months" - Aladdin and Jasmine, Merida, Pooh and Tigger, and the Great Goofini.  Again, this is unquestionably good news.  Aladdin and Jasmine added a lot to the area of Adventureland right outside of the Magic Carpets ride, while the area for Merida's meet and greet has just been an empty space that guests walk past.  This will do wonders to help spread out crowds as well, even if meet and greets aren't your thing.

Just outside Magic Kingdom, Chip and Dales Campfire Sing-A-Long returns to Fort Wilderness on July 6. This is in addition to the Hoop-Dee-Doo Musical Review previously announced as returning on June 23.  Both of these were pandemic casualties that I never personally experienced, but I know are beloved staples for fans of that resort.

Turning to Hollywood Studios, Star Wars Launch Bay officially reopens on July 17.  There had been rumors that this space would be repurposed but I'm happy to hear that this isn't the case.  Characters are back roaming Galaxy's Edge, but Launch Bay was the real home of Star Wars characters on Disney property.  Returning meet and greets include Chewbacca, BB-8 and Darth Vader.

On a pre-pandemic trip a few years ago, Launch Bay was one of the highlights of Hollywood Studios.  The meet and greets moved quickly and gave Star Wars fans a great chance to see some of their favorites.  I suspect this lineup will be mixed up occasionally, as Kylo Ren used to meet there (though now he is mostly being used in Galaxy's Edge).  Most notably, Disney likes to keep Galaxy's Edge as timeline specific as possible, meaning a lot of the "classic" characters don't in there.  No such worries at Star Wars Launch Bay (and Chewbacca is one of the most "photo worthy" pictures you can get).

Also in Hollywood Studios, characters will be back meeting guests in Toy Story Land.  No specific characters were mentioned, though in the past, the classics like Woody, Buzz and Jessie were all there, so I have to assume they're returning.  Toy Story Land in particular is begging for characters to soak up some of the crowds.  The closest you could get in recent times was a picture of the giant Woody on the sign for the land entrance.

There's also a quick mention of Donald Duck in his safari gear at Dinoland in Animal Kingdom.  Dinoland itself is kind of a mess in general (future post coming on what should/could replace it) so having a character there again at least gives it some life.  In fact, there are only two other character meets at Animal Kingdom currently so it's nice to see Donald make his return.

As for what was NOT announced, I still see a few things that will hopefully be returning in the near future.  Besides more characters at Animal Kingdom in general (there's no reason Timon shouldn't be back, for example), one major one that's still missing is Enchanted Tales with Bell at Magic Kingdom.  Belle does meet outside the attraction entrance, but I find it strange that no return date has been announced for the attraction itself.  This was a hybrid show and meet and greet, and was truly unique and pretty innovative (it only debuted as part of the New Fantasyland expansion ten years ago).  That's just wasted space right now and would make a big difference in that section of the park.

The biggest character meets not announced yet are of course the princess meals at Cinderella's Royal Table in Magic Kingdom and Akershus Royal Banquet Hall at Epcot.  Cinderella's is at least open, but is not currently a character meal; Akershus sits unused in a high traffic area of its respective park.  With characters back everywhere else and even buffets back, this can't be a safety issue.  My guess is it's a staffing issue - they need enough cast members to play these characters on a regular basis, and perhaps they're having a problem in that area still.  Hopefully this gets rectified soon, as these meals are truly a rite of passage (particularly for girls) on a Disney trip.

All in all, this announcement of returning characters is a huge positive.  Disney has struggled a bit to manage crowds after most capacity restrictions were dropped and meet and greets are a huge net benefit to that end.  They also add life to the parks that had been missing during the early days of the reopening and are a classic part of the Disney experience.  More characters equals more fun for everyone.