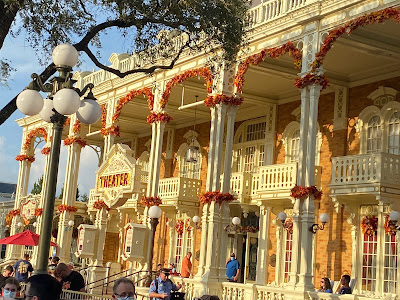 It's almost August and you know what that means - Halloween!  Is that not the first thing you thought of?  Well, I don't blame you.  But in Disney terms, August begins "fall" (even with temperatures in the mid-90's) and Halloween season.  Once that ends, Disney transitions immediately into Christmas season in early November.  That time frame probably falls more in line with your expectations (even though I'm a "don't put up the Christmas lights until after Thanksgiving guy").

The point here is that we are about to enter "holiday season" at Walt Disney World, and for Magic Kingdom, that means party season.  For the first time since 2019, both of Magic Kingdom's real holiday parties are back - Mickey's Not So Scary Halloween Party and Mickey's Very Merry Christmas Party.  The decorations may change, but the general idea is the same - they are hard ticket events (meaning not included with your regular admission) that run from 7:00 p.m. to midnight for each party.

What this means is that there are a ton of dates through the end of the year where your day at Magic Kingdom will be impacted, one way or the other.  In fact, out of the 143 days between August 12 (the first Halloween party) and December 22 (the last Christmas party), 61 days feature one of these parties.  My quick calculation says this is around 43% of the dates for this time period.  If you are going on a weeklong vacation, you will most definitely have to plan around these one way or another, and probably multiple times.

These parties may start at 7:00, but guests are allowed to enter at 4:00 with their party ticket.  This means that guests only have seven or eight hours (depending on the time the park opens) before the party crowds arrive.  It also means that fireworks are put behind a paywall - if you don't have a party ticket, you can't see nighttime spectaculars on these nights (and in fact, Enchantment doesn't run at all these nights, as it is replaced by a party-specific show instead).

But fear not!  Like anything Disney-related, all you need is a good plan.  We're going to talk about all of the possible scenarios you would face as a guest during this time frame, and what your best plan should be.  Let's start off by assuming that you DON'T want to go to one of these parties during your trip, and then we'll focus on if you DO want to go.

This SOUNDS like it should be the best choice for the average guest - on the nights that the parties are happening, the regular park hours are severely reduced for day guests.  If you want to see fireworks and/or have a dining reservation for later in the night, this might be your only option.  The park is currently scheduled to be open until 10:00 on non-party nights, and that might get extended to 11:00 (depending on crowd forecasts).

Here's the problem though - if a longer day (and night) at Magic Kingdom seems more appealing to you, it surely will for other guests as well. That leads me to ...

That's right - even if you don't have tickets to one of the parties, these are simply the best days to visit Magic Kingdom during your trip.  In normal times, crowd levels are pretty consistent for any given week. But during party season, these numbers shift dramatically at Magic Kingdom.  So many people avoid going on a party day because they are getting fewer hours to visit.

And that's why you do the opposite.  This has a double effect - party days at Magic Kingdom are some of the lowest crowds you will find on any given day.  This is especially true during a month like September, which traditionally has the lowest crowds in general (for a variety of reasons).  Conversely, non-party nights have much higher crowds because people are trying to cram in all of their Magic Kingdom time on those precious days between parties.

Longer hours might seem appealing, but you can actually get more done at Magic Kingdom before 7:00 (or really, before 4:00, when party guests start to arrive) than you can on a full non-party day.  Lines are dramatically lower and the atmosphere is simply better.  If you have multiple days at Magic Kingdom, you can always split the difference, but my plan would be to go on party nights for all of your Magic Kingdom dates for the crowd benefit alone.  If you need nighttime atmosphere (and I understand that you might), then hop to MK on a non-party night just for the evening and fireworks.  This is the best of both worlds approach. 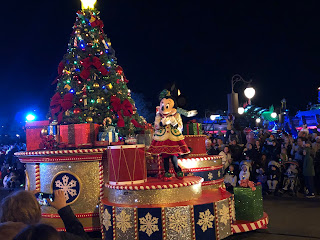 But what if you do want to do one of these parties?  This isn't as clear cut, but I have some thoughts on that as well.

Party Option One - visit a different park during the day, come for the party at night

This is too much like option one above for my tastes.  You'll be visiting a park that is likely more crowded than normal (due to guests staying away from MK) and then hopping for a long night of partying.  This can be leveraged by going to a park in the morning, taking a mid-day break to recharge and then coming in for the party.  You won't burn out on an exceptionally long day before the party is over this way.  Due to its earlier opening time, Animal Kingdom is ideal for this kind of plan.

Party Option Two - visit Magic Kingdom during the day, stay for the party

This is the option we chose during a Christmas season trip a few years ago.  The lower crowds were nice during the day, and allowed us to get most everything done before the party began.  It also gave us an advantage of getting in line for a rare meet and greet (Moana) before the party officially started.

The question of whether this option is for you comes down to what you want to go out of your party experience.  Do you want to enjoy the party exclusive entertainment or do you want to use that time to go on attractions with lower wait times since most other people are enjoying said entertainment?  If you've been at the park during the day, you should have been able to do any and every attraction that you wanted to do, so the party can be more about the atmosphere and entertainment.

The only risk here is similar to option one - the risk of burnout from walking around the park all day.  I this case, you wouldn't want to take a mid-day break, because you're losing hours of low crowds by doing so.  If you think you can handle it, though, this is a great option.

Party Option Three - skip a park during the day, go to the party at night

This can be a good option for a couple of reasons.  One is to avoid burnout and exhaustion. Perhaps you had a late night the night before and/or you want to sleep in (hey, some people do).  These days can be a good option to have a "pool day" where you can enjoy your resort at a relaxed pace.  Then, feeling refreshed, you can head into Magic Kingdom for the party.  If you do this, I would recommend going right when they let party guests in at 4:00 - this gives you eight hours in the park, and if you've been relaxing all day, this should be no sweat.

This is also a good plan because it saves you the price of a day ticket.  Now, if you're going on a weeklong vacation, the difference between, say, five and six days of tickets is not that significant.  But maybe it allows you to stay another day and use your day ticket then, or maybe you simply don't want to "waste" a day ticket on a half day at another park.  After all, you're paying for the party ticket separately, so you should maximize that if at all possible.

Whatever option you go with, remember the main advice here - go to Magic Kingdom during party days.  You can always pick up nighttime entertainment on a different night, but you can't enjoy the low crowd advantage that comes with following this advice.  Disney is about finding any leverage you can to avoid crowds, and this is one of the best ways to do it during this time of year.  Combined with Extended Evening Hours, you will have the opportunity to see Magic Kingdom at some of its least crowded times.