How Are The Disney And Universal Experiences Different? 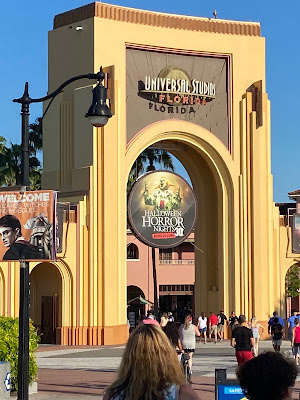 We all love Walt Disney World.  At least, I assume you do if you’re reading this, and I know I do as I’m writing it.  They’re the pinnacle of theme park design in this country, if not the world.  They’re bigger than anyone else, they make more money than anyone else, and they’ve created higher standards for themselves by their commitment to guest service over the years.  If you think “theme park industry”, you think Disney.

And with great power comes great responsibility (which is a phrase I just made up – don’t bothering Googling it).  Disney gets all the coverage in the press, good or bad.  All eyes are on them, even if other companies make similar decisions before Disney does (some of the Covid-era closing/re-opening announcements come to mind).  So it stands to reason that anytime Disney does something that can be considered unpopular among fans, those announcements get magnified in a negative way, on social media (or even mainstream media) and comments on blogs.

Disney has done plenty in recent months to draw the ire of even its most hardcore fans, often in the name of “safety”, which usually is a cover for “saving us money.”  Some of these include ending Disney’s “free” airport transfer, Disney’s Magical Express; charging for overnight parking at resorts; and most recently (and notably), replacing their previously “free” FastPass+ system for ride reservations with a new, paid only system called Genie+.

You’ll note that I put the word “free” in quotes a couple of times above.  That’s because these services were never truly free, but they were included in the cost of your resort stay or ticket price.  By taking these offerings away – and raising ticket prices in the process – you are essentially paying more and getting less.  None of the above is a truly substantial cost (though your definition of that might be different than another person’s) but all together, it leads to cries of Disney “nickel and diming” their most loyal guests.

If you are someone who was bothered/outraged by any of the above changes or anything else over the years, that’s understandable.  People often have this vision of what Walt Disney World was to them when they were younger and things were easier/cheaper/better/more magical.  Chances are, the previous generation was getting increasingly annoyed by changes that were happening then as well, so this is really nothing new.  Again, Disney is a business designed to make money.  If they continue to raise prices, take away extras, etc, and people still show up in large numbers, they have no incentive to offer the guests anything else.

One thing I often here from disgruntled Disney fans after an announcement that they don’t like is this – “I’ll just give my money to Universal.”  This seems like a valid alternative.  After all, Universal Orlando fulfills a lot of the same needs as Disney and they’re located in the same vicinity so you don’t even have to alter your travel plans very much.  There was also a perception during Covid that Universal was handling things “better” than Disney.  Disney introduced a park reservation system, whereas Universal operated the way they always had (albeit capping attendance at a lower capacity due to social distancing restrictions).  During the recent wave of Covid cases in Florida, Disney updated their policy to require face coverings in indoor spaces, while Universal “strongly recommends” that you wear them but stops short of it being a requirement.

But there’s a reason “I’ll just go to Universal instead” is flawed logic.  The truth of the matter is, no matter how similar the two entities may be, there are plenty of differences.  Disney versus Universal is not the apples to apples comparison that some people seem to assume.  For one thing, Universal caters to an older demographic in general.  They’re marketed in a way to attract older kids/teens and adults, essentially tourists who have “outgrown” Disney and are looking for more thrills in their vacation.  The rides and attractions at Universal certainly reflect that – there are more intense motion simulators and roller coasters that go higher, faster and upside down (the latter of which only happens in one Disney coaster – Rock N Roller Coaster Starring Aerosmith).

If you like this kind of thing, there really isn’t any issue.  But if you have younger or less adventurous kids, it can be hard finding things for them to do at Universal.  There is a nice little area called Seuss Landing, as well as Despicable Me and Shrek attractions, but not much beyond that for little ones (I’m excluding The Wizarding World of Harry Potter here; while fantastic, most of the attractions there are more intense than their Disney counterparts). We specifically didn’t take our kids to Universal until they were a little older, knowing that they wouldn’t enjoy it as much as Disney. 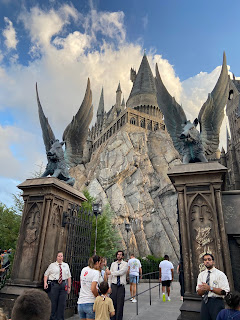 There’s also the matter of running out of things to do.  Universal is great fun, but it only really has the two theme parks – Universal Studios Orlando and Islands of Adventure – and one water park, as well as CityWalk, where most of the shops and restaurants are.  While incredibly convenient to get around, as opposed to the great distances you have to travel on Disney property, you can run out of things to do fairly quickly.  We spent around three days total there (two half days and two full days) and by the last day, we were just looking to re-do some things we liked to fill the time.  It wasn’t strictly “necessary” to be there any longer than that.  Contrast that with Disney, where there are four theme parks and so much to do that it’s almost impossible to fit it all in.

There’s also the matter of the intangible aspects, the “magic” if you will.  The Harry Potter sections of the Universal parks are wonderful – they’re detailed and chock full of familiar sites from the books and movies (my wife particularly loved going through the brick wall into Diagon Ally).  And the theming in the other areas is nice as well, but it often feels like a bunch of different Universal intellectual property sort of thrown together as if to say, “here are some rides based on movies that we made”. One of the things that has always set Disney apart has been the immersive theming from section to section in each park, with the cast member clothing, music and general mood telling a story that you can’t find anywhere else.

Ultimately, this post isn’t designed to knock Universal – there’s plenty of great stuff to see and do there and we had a great time on our recent trip.  But there’s a reason Disney is number one and they have something to offer that no one else does.  It’s for this reason that it’s hard to just say “I’m done” and go to Universal instead. There’s a reason we all keep coming back to Disney and even if we have our issues with how certain things are handled, once you’re there, it’s hard to think about that but instead get lost in the magic that comes with their parks.