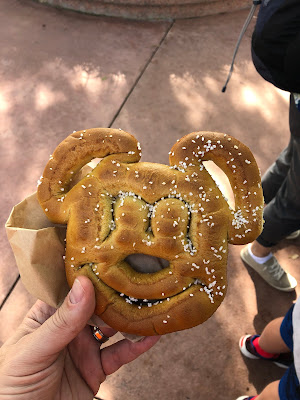 When you’re walking around the Disney parks all day, one of the most important things to monitor is when you need to take a break to eat.  The parks are chock full of food, from the smallest snack to the largest sit down meals.  Many meals, especially of the larger variety, often need to be planned well in advance.  But snacks?  Those are impulse buys, and you should take advantage of them whenever you can.  After all, a little snack can go a long way in keeping your day on track.

Walt Disney World is known for its food game, even among snacks.  There are plenty of places throughout the resort where you can get unique snacks, and certain times of year bring certain specialties as well.  But what about the ubiquitous snacks, the ones you can find EVERYWHERE?  What is the quintessential “Disney snack”?

We’re going to talk about five of the most common ones here.  I’m not saying these are the “best” or anything like that – like anything, food especially is up to the individual taste.  But rather than talking about obscure or unique snacks, we’re going to talk about ones you can find regularly and see what makes them so popular.  In other words, try to make sure you sample these when you’re on vacation, or it’s like you haven’t been there at all.

There are variations on this throughout the parks, but it’s most known as the classic fried dough stick with cinnamon sugar on top.  They often come in single long sticks, and can easily be spotted walking around the parks.  Sadly, I often find myself eating other things and bypassing the churro when I’m there.  Is this a mistake?  Many will say yes.  But I had to include it on this list given their iconic status (homemade shirts often proclaim, “I’m here for the churros”).

Personal verdict: N/A.  Haven’t had them often enough to render a decision.  I hope to correct this soon.

You can find just about anything Mickey-shaped at Walt Disney World (if not there, then where?) and everything just tastes better with ears.  I can’t go a trip without a Mickey waffle, for example.  But the pretzel is one of my favorites.  It’s a quick and easy snack to pick up, often with cheese dipping sauce.  It’s hard to find someone who doesn’t like one of these.  I have fond memories of picking up a few pretzels and sitting in the shade for a few minutes, dipping them in unnaturally orange cheese and just people watching.

Personal verdict: You can’t go wrong with this.

This may sound crazy, because there’s nothing “special” about popcorn from a cart, which you can get just about anywhere in the world. But there’s something about Disney popcorn.  It has a delicious buttery taste throughout, akin to movie theater popcorn.  It’s easy to pick up and eat as you walk around, and save some for later when you need a pick me up.  Pro tip – if you’re going to be there for more than a couple of days, buy a souvenir bucket on your first day and bring it back for refills.  Depending on where you get your first one, you can find a bunch of unique designs specific to the park or area you’re in.  It may sound like a pain to carry the bucket around, but it can easily fit in a backpack (which you’re sure to be carrying) or hang from the outside.  They currently cost $12, which seems like a lot, but refills (for the length of your stay) are only $2.  Regular popcorn is $5.25, so if you’re getting (at least) one every day, it pays for itself, plus you get to keep the bucket and you can more popcorn per fill up than you do in a cardboard container.  Win/win.

Personal verdict: My mouth waters just thinking about it. 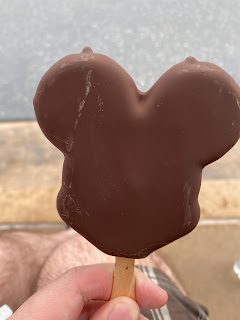 Remember what I said about things tasting better when Mickey-shaped?  This is especially true here.  There’s nothing fancy about this (there are objectively better ice cream treats throughout the resort – I’d recommend L’Artisan des Glaces in the France pavilion at Epcot) but it can’t be beat, especially on a hot day (and are there any other kind in Florida?).  If you don’t know, it’s a vanilla ice cream bar coated in chocolate, shaped like everyone’s favorite mouse.  Once you start eating, it’s a race against the clock (and sun) as the melting begins and the shell starts to crack.  Fortunately, I can usually scarf them down quickly enough where this won’t be an issue but you might need to help your kids out a little.

Personal verdict: Often imitated, never duplicated.  I can picture exactly where I was at various times eating one of these. Worth every penny.

Finally there’s what I consider to be the most iconic of the Disney snacks – the Dole Whip.  In partnership with Dole, Disney has created this pineapple soft serve ice cream creation.  There are plenty of variations on this but if it’s not pineapple, it’s not a real Dole Whip, in my opinion.  I personally prefer it mixed with vanilla or it becomes too overpowering but it’s hard to go wrong.  There are numerous locations where you can get these sweet treats, but two in particular stand out to me as fitting the atmosphere.  First is Aloha Isle in Adventureland at the Magic Kingdom.  Grabbing a Dole Whip and eating outside the Enchanted Tiki Room is a boss move.  The real “best” Dole Whip spot however is at Pineapple Lanai at the Polynesian Resort.  It’s an outdoor counter only serving Dole Whip (often with unique flavors as well as the classic).  You can’t beat walking around this tropical resort with a Dole Whip in hand.  If you needed any excuse to take a monorail ride over here during your trip, this is as good as any.

Personal verdict: A trip to WDW wouldn’t be complete without a Dole Whip or two.  Don’t miss it.

As I said, there are plenty of other unique snacks and I’m not trying to dissuade you from any of them.  But you can’t beat any of the above if you’re just looking to add some calories to your trip.  You’ll walk it off in no time.