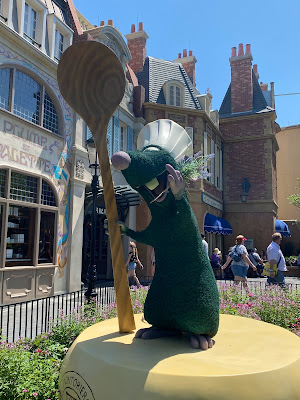 Remy’s Ratatouille Adventure, Epcot’s newest attraction, is switching from a virtual queue to a standby system beginning January 10, 2022.  In this post we’ll talk about what that means and if it has any bearing on the Individual Lightning Lane (ILL) purchase, as well as how virtual queue might be used in the future.

If you’re interested, you can read the official announcement from Disney on their blog  . Basically, Remy’s Ratatouille Adventure debuted as part of the World’s Most Magical Celebration for Walt Disney World’s 50th Anniversary on October 1.  It had been a long time coming, and had been ready for months leading up to that date, but Disney held off opening it, partly because of the optics of having a large crowd for a new attraction during the pandemic and partly to take some of the pressure off of Magic Kingdom, which was sure to have (and did have) massive crowds on October 1.

In any case, since the debut of Genie+, there have been two – and only two – options for how to ride Remy.  One was the virtual queue system, which had guests attempt to get a boarding group in the morning for a return time later that day, essentially “holding” their place in line virtually until they were called back.  This system was used for Star Wars Rise of the Resistance for quite some time, but once Remy debuted, it was the only attraction on property to use the virtual queue.  The other option was to pay to ride via ILL – it was not included in the rest of the Genie+ attraction list, and there was no standby line.

I referenced this in a post on ILL and made a marginal (at best) recommendation that if you REALLY wanted to ride Remy but missed out on the virtual queue opportunities, you could always pay to ride it individually.  That post has now been updated, but basically that advice is now irrelevant.  Like every other ride, now you can wait in a regular standby line for Remy, which probably changes the math on how willing you are to pay to ride it separately.

The use of the virtual queue for Remy was always a little odd, because it didn’t have the demand or technological issues that Rise of the Resistance had.  The virtual queue made a lot of sense for Rise but I suspect the only reason Remy was added to that system was because it had that shiny new ride smell.  By putting Remy into that system, Disney signaled their intentions that new rides will likely follow this pattern at first until such time as Disney deems them ready to switch over to standby. 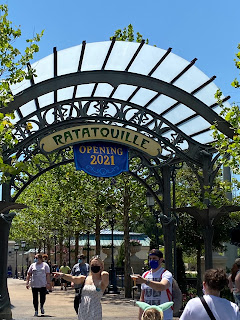 To that point, the next ride to debut at Walt Disney World is likely to be Guardians of the Galaxy: Cosmic Rewind, also at Epcot.  It is extremely likely that this attraction will open with a virtual queue as well as be added to the ILL structure, probably taking the place of Frozen Ever After if they plan to stick to two ILL rides per park (which in itself is debatable).  Disney seems to like the virtual queue system, and it is a good way to manage crowd flow while they work out whatever kinks are related to that particular attraction.

May 2022 update: this is indeed exactly what happened here.  Remy is now standby and currently part of Genie+, while Guardians of the Galaxy will only be ridable via ILL or virtual queue, at least for now.

Regardless, this is good news for anyone hoping to ride Remy from this point on.  There are fewer hoops to jump through, and while the standby line is likely to be one of the longest in the park for now, at the very least, it gives you  the option to wait which wasn’t available before.  Our basic park advice remains the same – go early or do it right before the end of the night.  If you are staying on property, taking advantage of early entry is a good way to get a jump on this attraction.   Bonus if you’re staying at one of the Crescent Lake Resorts or taking the Skyliner, as entering through the gate at that end of the park puts you closer to the France pavilion for Remy.

We’ll continue to keep an eye out and see if our prediction of future virtual queue use comes true, but I suspect that is the way of the future for Disney attractions.  At this point, only one ride (Guardians) is using a virtual queue, signaling Disney's desire to put the newest attractions there first before offering a standby line.