Epcot’s annual International Flower & Garden Festival is returning in 2022.  This post will talk about the Epcot festivals in general and what to expect from a visit during Flower & Garden.

A few things to note here.  First, during this last year and due to Covid concerns, some of these festivals had been scaled back and re-christened “A Taste Of” whatever festival was happening at the time.  Starting with the 2021 Festival of the Holidays, Disney appears to be back to using the original language and not the couched version (this could be semantics in some cases, but Disney is usually very particular about what they put out and why).

Also, if you look at the dates, these festivals have gotten longer and longer in general, particularly Flower & Garden and Food & Wine.  There are really only a handful of weeks throughout the year that Epcot is NOT in the middle of some festival.  This is also by design – Epcot tends to have the lowest attendance figures of the four parks unless there is a “hook” to get people in the door.  By making almost every day a festival day, Disney has found a way to keep people coming.  Locals in particular flock to these festivals on nights and weekends, so be warned if you are planning a trip and try to avoid Epcot at those times.

So what IS the Flower & Garden Festival?  As the name suggests, this festival celebrates the beauty of nature.  This is most notably seen in the gardens and topiaries found throughout the park.  The topiaries are all Disney characters lovingly recreated in shrubbery.  They’re really a sight to behold and are scattered throughout the park.  Gardens also abound, and give a great pop of color to a park that is currently full of construction walls and dirt. 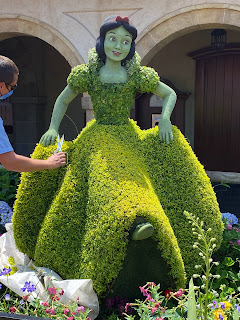 There are also a few kid-friendly garden trails and scavenger hunts (mostly free, but the map for Spike’s Pollen-Nation Exploration costs $9.99).  Epcot typically does this to include children in parts of the park that might be drier or less interesting to them and I think it’s a good idea.

There’s also the Garden Rocks Concert Series, where bands play at the America Gardens Theatre in the American Adventure pavilion.  Details have yet to be released for this year, but in years past, Garden Rocks has featured such artists as Simple Plan, Air Supply, Berlin and Rick Springfield.  Obviously your taste in music will dictate which, if any, of these acts you are interested in seeing.  But music in general makes Epcot feel alive and the America Gardens Theatre is a wonderful place to see live music, with the lagoon as a backdrop.  Nothing says festival season like an outdoor concert.

Well, maybe there is something even more iconic than music at this festival – food.  This isn’t Food & Wine, but Disney is smart enough to realize that people LOVE food and the infrastructure is already there at Epcot.  So why not have outdoor kitchens with festival exclusive food and drink?  This is really where Disney makes their money, as the long lines and prices indicate.  There were more than twenty of these booths last year; many return year to year and a few new ones open to take the place of old favorites.

This is really a win/win situation.  A constantly cycling series of food and drink locations, most of which are in World Showcase, help keep that part of the park fresh year after year.  It’s convenient to stop and pick something up at a booth rather than wait in line at a restaurant and much of the food is photo ready, which leads to social media posts promoting the festival.  Disney has this down to a science.

We attended Flower & Garden last year and had a great time.  The park feels vibrant and full of life and color.  It helps that this festival takes place in the spring, where the weather isn’t too hot (though in recent years this has extended into July, which takes away a little of the fresh feeling).  Cast members are constantly out caring for the gardens and trimming the topiaries so that everything looks in tip top shape for the guests.  If you’re traveling at all during this time period, make sure you take the time to, well, stop and smell the flowers at Epcot.