Park Touring: By Area, or Crisscrossing? 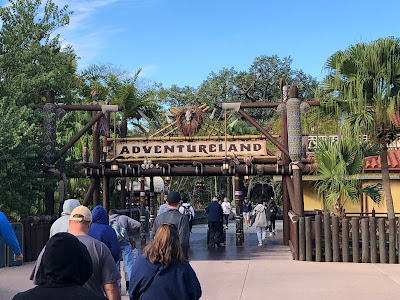 I was recently watching this fascinating video about the history of FastPass+ at Walt Disney World.  It’s long and extra nerdy, so only watch it if that’s you (obviously it’s me).  Something came up during the course of the video, and it prompted me to think about an idea for this post.

I’m paraphrasing, but the theory was that if a guest could pre-book FP+ rides, they would be more likely to plan their day around those rides.  If someone had a FP+ for Space Mountain from 11:00-12:00, it would stand to reason that this person would gravitate towards Tomorrowland and hit some of the lower priority rides while waiting their turn for their FP window to open.  With FP+ a thing of the past and Genie+ the way of the future, this kind of situation might not happen as often.  If you are booking your rides one at a time on G+, you’ll probably take whatever higher priority ride comes up, especially if you can do that one soon, giving you a chance to book another attraction as soon as you tap in to that first one.  That would imply that a better strategy would be to crisscross the park, hitting your G+ rides as they come and not necessarily doing an entire land or area at one time.

That got me to thinking about whether one of these above strategies is inherently better or worse than the other.  Times are changing at WDW, and the landscape looks a lot different than it did a couple of years ago (I’m avoiding talking about 2020 because it was such an anomaly that I don’t know if we can glean much from that).  So which of these options is better?

Let’s take a look at some of the pros and cons of doing the parks sequentially, where you would start in one section, do all of the attractions in that area and then move on to the next one.  The most obvious benefit here is that there is going to be less walking.  You will walk – A LOT – at WDW, no matter how you tour the parks.  Spending more time in one section will save you some steps that can be valuable later in the day when your tank might be empty.

This was largely how we toured the parks when FP+ was an option.  It was easy to look at your itinerary – and a clock – and work around the rides and/or meals you had planned.  This was especially true in Magic Kingdom, where the park is easily divided into the left and right sides.  I could spend most of a day in the Fantasyland and Tomorrowland section of the park without even venturing past the hub and to the attractions on the other side.

One of the other hidden benefits of this approach is that you get to enjoy the immersive theming more easily.  Disney works hard to make each section of their parks feel different from each other.  If you’re running from place to place, you’re not really enjoying the parks the way they were intended to be enjoyed.  It can also make for a more relaxing pace, and gives you the opportunity to go from ride to ride rather quickly without much downtime.

But this only works when it’s not very crowded.  The biggest drawback to this approach is that the parks aren’t balanced in terms of priority rides.  If there is one “E ticket” ride in each section of Magic Kingdom, for example, it’s objectively better to try to get to all of those at times when the parks aren’t crowded.  We’ve discussed this in more detail before, but to reiterate – take advantage of any opportunity you can to beat crowds.  Arrive early, stay late, use any extra hours you get for staying on property.  This will be a necessity at busier times. 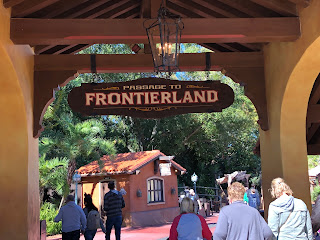 That’s what makes the crisscrossing the park strategy more viable as things are currently constructed.  If you are using G+, you’re going to want to get your money’s worth, and that can mean having to spend more time walking to hit higher priority attractions.  You don’t get to pick your return time as it currently stands, so if Jungle Cruise is available now, you should probably take it or risk missing out or having a much later timeslot when it might not be convenient.

Of course, the biggest con here is the walking.  Some people love to walk, but especially if you have younger kids, this can be difficult.  You don’t want to wear down by mid-day.  But sometimes efficiency is its own reward – if you could get to the end of your day and do more attractions this way, or save yourself three hours in lines, is that worth it?

The answer to the original question here of course is … there’s no right or wrong answer.  Everyone has a different touring style.  The question becomes what’s more important, your time or your energy?  Everyone has to answer that differently.  The extra wrinkle here is that G+, unlike FP+, costs money.  That is absolutely a factor in how much effort you want to put in to experience as many attractions as possible.

A combination of the two is probably the best answer, and what most people will do.  I love to tour the parks in sections, but it isn’t always possible.  I also don’t mind a bit of a walk if it feels like I get to take advantage of a short line or quick return time for an attraction.  The best advice is always to prioritize what you want to do, and plan your day around those two or three things. That doesn’t mean you’ll ONLY do those attractions, but if you have some “must do” items on your list, make sure you actually, well, do those.  If that means rope dropping something or making something else your first G+ selection regardless of the return time, then that’s what you should do.  Fill in the rest of your day around those things and try to do as much as possible in whatever section of the park you’re in.  This is sound advice, even when Disney throws another curveball with whatever line skipping method they come up with next.