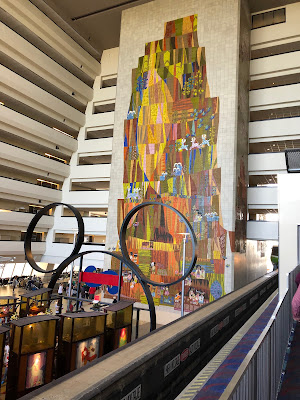 The Walt Disney Company had their quarterly earnings call yesterday, in which they discussed the financial aspects of the company with their investors.  This can be dry material (and often is!) but sometimes bits of information can be gleaned in terms of where the company sees itself and where it's going.

There is a lot of information in these calls and I'm not going to discuss all of it here (if you're interested in the number of new Disney+ subscribers and such, there are plenty of places to find that information).  But there were a couple of tidbits relating to Disney Parks, Experiences and Products, which obviously includes Walt Disney World, that might be relevant so I figured I'd talk about a couple of those here and offer some quick commentary.

First we'll talk about the revenue of that division.  In the first quarter 2022 (ending 12/31/21 - their fiscal year starts 10/1), Disney Parks revenue was $7.2 billion.  This is exactly double ($3.6 billion) that they made in this same quarter last year.  This resulted in a profit of $2.5 billion in this quarter as opposed to a loss of $0.1 billion this quarter last year.  The $7.2 billion figure also beat the expected revenue of $6.13 billion for the quarter.

A couple of things here - first, that first comparison is eye popping but shouldn't be surprising as the first quarter last year (10/1/20-12/31/20) was still in the midst of the phased Covid reopening.  That meant that attendance was artificially deflated to account for capacity restrictions and social distancing, two things which are not relevant at the same time this year.  And remember, this division accounts for all the Disney parks, not just WDW - Disneyland was closed until April 2021, meaning their revenue last year was zero for this quarter.  The bigger deal is beating expected revenue by more than a billion dollars.  That's very encouraging for the company and is reflected in their stock price.

Disney CEO Bob Chapek talked about the introduction of Genie+ and Lightning Lanes as a big factor in increased "per capita ticket revenue" (a fancy way of saying how much each guest is spending).  Chapek also noted that between 33 and 50 percent of guests purchased Genie+ and/or Individual Lightning Lanes during this time.

This is the piece that's most interesting to me personally.  The guest adoption rate of Genie+ has largely been an unknown up until now, so it's nice to see some actual numbers associated with it.  It'll be interesting to watch - in general, the more people that use the service, the less valuable it is, as more people will be clogging up those G+ lanes.  But there needs to be a baseline level of guests using it or it wouldn't be profitable for Disney.  Balance is key here.

Thirty-three percent sounds about right and is probably a good ratio for guest satisfaction.  Chapek did note that it was at or above 50% at the most crowded times, which makes sense, as the impulse to skip a very long line is clear.  I worry that more than 50% usage will be difficult to deal with as a guest - too many people in G+ lines will lower the value for each individual ride, and the standby line will be longer as well, as they have to accommodate G+ return times. This will be interesting to watch going forward, as Disney wants to make sure people don't return from their vacation complaining about long lines and Genie+ not being "worth it."