Figment Popcorn Bucket, and the Problem With Disney Merchandise 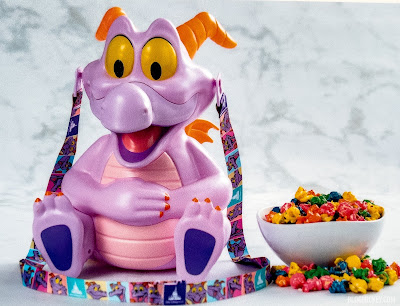 Epcot’s International Festival of the Arts began recently, and in traditional Disney fashion, items exclusive to the event became hot commodities.  In this case, one particular item became the hottest commodity of all – a popcorn bucket featuring the beloved Figment, selling for $25 at Pop Eats and containing rainbow popcorn.

If you were to visit Epcot for the first day of the festival, what line do you think might be the longest at the start of the day?  Perhaps Remy’s Ratatouille Adventure, since it’s the newest ride in the park and just recently went to standby?  Or maybe Test Track, which always sees inflated wait times early in the day, or Frozen Ever After, perennially one of the most popular rides in the park?  No, the longest line that morning – and indeed all day – was to purchase this Figment popcorn bucket.

How long would you wait in a line for an item like this?  I guess it depends on how much time you have at the parks and how much you want the item. But for many people, that wait exceeded FIVE HOURS  that day.  Seems crazy, doesn’t it?  But exclusivity and scarcity create demand, and no one is better at exploiting that demand than Disney.  Is this a problem? And if so, why?

First, on the positive side, Figment is a character that represents Epcot, and the fact that the demand was so high here (managers were surprised by the turnout, according to this piece) means that people still love the character, even as his presence in the parks has been diminished. Plus the bucket itself is very cute and would make a great collectible.

One of my biggest issues with how things played out on that first day is that Disney decided to ONLY sell this bucket at Pop Eats.  If they had put them in other locations throughout the park, it would have prevented an overwhelming line that wrapped around much of future world.  Plus, if the wait was four hours at one location, wouldn’t it be logical to suggest that you could have waited one hour at one of four locations?

I think in some ways, Disney loves the idea of creating this demand, as there are plenty of headlines coming out of the Festival talking about the long line for this popcorn bucket.  In general, I don’t think Disney wants to tell people that they have really long lines, because it will make guests angry and hopeless. But this isn’t for a ride, it’s for an item.  So future guests reading about this craziness might be more inclined to try to seek it out, feeling that they scored an exclusive item and therefore driving demand up even higher.  That’s a win/win for Disney.

The bigger problem though is that many of the people willing to endure these long lines (and help create them by waiting in the first place) aren’t Figment fans but instead eBay resellers. This has been a problem with Disney merchandise in the past and this is no exception.  That first day, I pulled up an eBay search for this bucket and what did it look like?

While some of the initial craziness has died down (I saw $200+ prices earlier), these are still insane.  And there are often twenty or more bids on these listings, meaning that demand is there.  Who is more to blame in this case, the eBay sellers that pick up as many of these as they can or the people willing to pay the exorbitant prices to get some exclusive merchandise?  I’m not telling people what to do with their money, but if they didn’t spend so much, perhaps the lines to purchase them at Epcot would be lower and more actual fans could get them into their hands.

Regardless, this is just a microcosm of the Disney experience.  The hype will die down and by all accounts, they haven’t sold out (yet) so you didn’t HAVE to be there at rope drop on day one.  But this system leaves so many fans out in the cold, or makes them pay a huge penalty to purchase them second hand.  Disney wins again, but I’m not sure if anyone else does.