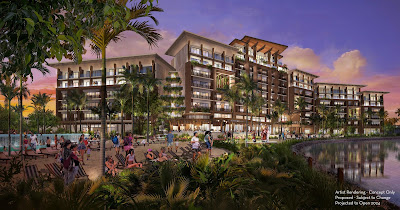 Disney put out a press release today announcing the addition of a whole new building for the Disney Vacation Club (DVC) at one of their flagship resorts, the Polynesian.  We're sharing the press release in full, and have a few comments on this development.

“It’s no secret that our Members and Guests love the monorail resorts at Walt Disney World,” said Bill Diercksen, senior vice president and general manager of Disney Vacation Club. “Expanding our Disney Vacation Club offerings at the Polynesian would give our Members and Guests yet another incredible option for staying close to the magic while making vacation memories that last a lifetime.”

Inspired by the early concepts for Disney’s Polynesian Village Resort, the Imagineers of today are honoring the past while furthering the resort story with this innovative addition. Projected to open in late 2024, the proposed vacation ownership property would complement the existing resort and evoke the spirit of the Pacific Islands.

Situated on the shores of Seven Seas Lagoon, the proposed property would join the rest of the resort in offering stunning views of the Magic Kingdom. Proposed plans would offer additional rooms, new recreation offerings and dining options. More information and project details will be shared at a later date.

Since 2015, Disney’s Polynesian Villas & Bungalows has been a favorite resort destination, offering an island paradise in the middle of the magic. Disney’s Polynesian Villas & Bungalows currently has 380 Disney Vacation Club villas, including the largest Deluxe Studios at any Disney Vacation Club resort at Walt Disney World and unique two-bedroom Bora Bora Bungalows, located over the waters of the Seven Seas Lagoon – the first of their kind at Disney.

A couple of things of note when it comes to commentary.  First, this new building will be situated between the Polynesian and the Grand Floridian, right on the Seven Seas Lagoon.  This particular location is noteworthy, because it was the home of the Spirit of Aloha dinner show that was a mainstay at the Polynesian for years.  This shut down during the pandemic, and never reopened; today's announcement marks its permanent closure.

On a related note, I can't help but feel disappointed by this.  One of my issues with this building (at least from the concept art) is that it's just rather ... boring.  The Polynesian has a unique style, and even the DVC section that was added a number of years ago follows that style.  This is just a generic looking building sitting right on the shore of one of Disney's best properties.  To go from a fun, unique themed entertainment experience like Spirit of Aloha to putting in a sterile hotel building is tough for many long time fans to swallow.  It's as close to "paved paradise and put up a parking lot" as you can get.

The generic quality of the new building isn't anything new - Disney has lately found ways to squeeze these kinds of structures into already existing property rather than start anew in a different area (the Riviera and Gran Destino tower at Coronado Springs are good examples of this).  If you think about what you love about the unique resorts that Disney has to offer, you're probably thinking of buildings that were built before the turn of this last century.  That in and of itself is a shame. 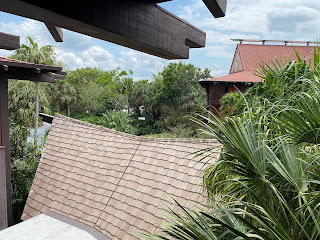 One other issue I have here is that nothing in this press release talks about amenities to the new building.  If there isn't a new restaurant or two, it's just going to add more guests and visitors to an already overtaxed resort (there's a reason the Poly is so popular).  It also adds congestion to the walkway between the Poly and the Grand Floridian.  Part of the Poly's charm is its relaxed vibe, but it's hard to be relaxed with so many people coming and going.

It's just a shame that looking across the Seven Seas Lagoon from Magic Kingdom, this will draw your eye rather than the beautiful main buildings of the Polynesian.  I truly hope it doesn't detract too much from that experience.  Obviously Disney is doing this for the number one reason of all - money.  The Poly is a hugely popular resort and people will surely flock to this new building, leading to that all important revenue.  I just wish they had invested some of this time and money into improving the parks themselves.

Reading this over, this post seems like kind of a downer, because it is.  I want to be excited when Disney makes an announcement like this, but my trepidation supersedes that here.  I hope to be wrong, and this will turn out to be a big success.