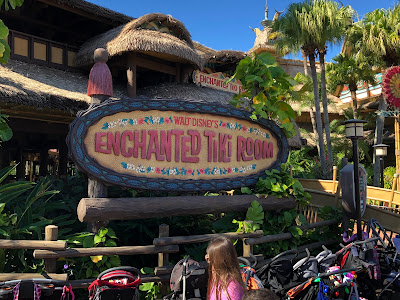 I've been thinking about Magic Kingdom a lot lately (as one often does) as I've been reading and writing about various strategies as they relate to beating the crowds, particularly at this time of year.  You can look at this post for far greater detail on a day or two at Magic Kingdom.  But one of the things I keep coming back to is that the middle of the day will also objectively be the worst time to be at the park, from a crowd and weather standpoint.

You have some options at that time of day, including taking a midday break and going back to your resort to nap or swim.  But if you want to stay in the park, all is not lost.  Instead, you just have to strategize around the worst of the crowds.  If you can knock out a bunch of high wait time attractions early (and/or late), you can tour at a more leisurely pace during the middle of the day.  And what better way to do that than to visit the various shows that Magic Kingdom offers.

Now that more entertainment is returning to the parks, the word "show" can mean a number of things, including Mickey's Magical Friendship Faire on the stage in front of the Cinderella castle.  But I'm thinking of a different type of show attraction, one that doesn't involve live performers or standing outside in the heat.  Instead, I'm talking about the four classic attractions at Magic Kingdom that rely on animatronics, and are often some of the shortest wait times you'll find.  They are (clockwise from the front of the park) - Walt Disney's Enchanted Tiki Room, Country Bear Jamboree, The Hall of Presidents and Walt Disney's Carousel of Progress.

These four attractions are similar in a lot of ways.  They are all indoors (read: out of the Florida sun), involve audio animatronics, are seated shows and are all classic Disney attractions that have a connection to Walt himself.  Plus, perhaps because they have been around so long, they often don't draw a big crowd at any one time.  This makes them perfect options for some low key Disney magic, rather than, say, waiting ninety minutes for Space Mountain.

Obviously I would say that these all deserve to be seen. But which one is the best?  The word "best" is always subjective here, so let's run through them one by one and see which one would suit a guest's fancy.

The Tiki Room is basically the first Disney attraction to use audio animatronics, dating back to its original place at Disneyland in 1963.  There are over 225 animatronic performers at this show, mainly various flora and fauna.  It's performed theater in the round style, and showcases the music and beauty of the South Pacific.  There's even a cute little pre-show as you're waiting to enter the theater.  Considering the age of this attraction, it never fails to impress, with plenty of color and movement to absorb and enjoy.

Originally designed for a Disney ski resort in California that never came to fruition, the Country Bear Jamboree showcases eighteen animatronic bears as they sing and play along to some down home country music.  This was one of the last attractions that Walt personally had a hand in.  It's a fast paced show that cleverly works within the space allowed in the theater to create some classic toe-tapping music.  Some of the references may seem dated, but it's truly something the whole family can enjoy. 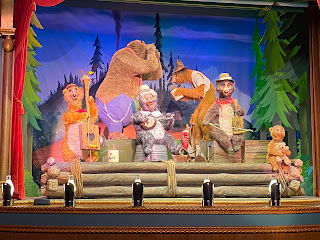 The Hall of Presidents:

A triumph in audio animatronics, this show was developed after Great Moments With Mr. Lincoln was  a hit at the World's Fair and then at Disneyland.  It begins with a film showcasing our nation's history, then reveals audio animatronic figures of every president in American history.  This attraction gets updated whenever a new president is elected, and that figure is even given a speaking role in the show.  It's certainly more interesting than learning American history in a classroom.

Another success story from the World's Fair, this attraction follows a family over four generations and shows how technology helps improve their lives (and sometimes causes some issues!). This takes place in a revolving theater, where the audience sits in one room which rotates to each new scene.  It also features the incredibly hard to get out of your head theme song, "There's a Great Big Beautiful Tomorrow".

So which of these is the best?  Again, this will depend on your party and their interests.  To appeal to the largest number of people, though, I would say the answer is probably the Enchanted Tiki Room.  It's a fun and relaxing show featuring birds - who doesn't like that?  Country Bear Jamboree was also considered, but its potentially dated tone might not appeal to everyone.  I personally love the Carousel of Progress, but it might not hold the attention of the younger guests.  The same holds true for the Hall of Presidents - it's a technological marvel, but that might not be enough to win over kids who would get fidgety with its 25 minute run time.

Really, though, you can't go wrong with any of these.  While I wouldn't rush to rope drop them, there's something to be said for a simpler era in Disney history, and these shows can all make a long day at Magic Kingdom a bit more relaxed.  If you've passed them over in the past, make sure you check them out next time.