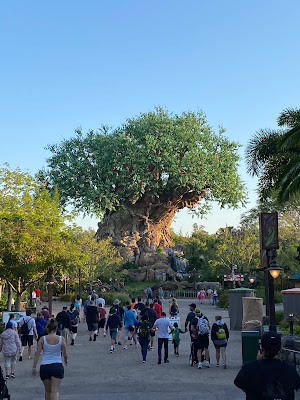 I've seen a few stories pop up over the last few days that probably didn't warrant their own posts, so I figured I'd combine them all here.  There's always SOME news at WDW and it's easy to miss it if you're not looking.

Walt Disney World has often recognized Earth Day (April 22), most notably at Animal Kingdom. But this year, that celebration extends to a whole week, April 18-24.  Per the official press release:

During this popular event, guests are steeped in the wonders of the natural world through family-friendly experiences and special offerings. They become part of the park’s conservation story and connect with many of the animal species the Disney Conservation Fund is working hard to protect.

To celebrate the third planet from the sun, the park is pulling out all the stops! Guests will be treated to unique character sightings, fun learning opportunities, specialty merchandise, themed food and beverages, a limited-time Wilderness Explorer badge and more.

Along the way, guests will discover the power that lives within them to create positive change and be inspired by the natural world everyone shares.

“Earth Day 2022 is one day, April 22, but our celebration of this planet we call home is so magical, it goes on all year long,” said Sarah Riles, vice president of Disney’s Animal Kingdom. “We invite guests to join in fun that is both entertaining and inspiring.”

You can read the rest on their site, but I particularly like the special Wall-E Magic Shot, since that character is a great representation of conservation.  Animal Kingdom is the perfect park for this type of thing too, and they are often overlooked in these celebration events.

Next up is the return of the Minnie Van service, a private car service to the parks offered in partnership with Lyft.  This service originally debuted in 2017, so it was a relatively recent phenomenon.  The service was discontinued (or at least suspended) when the parks shut during the pandemic closure and until now, there had been no official word of their return.  Now the Disney Parks Tik Tok account (words I can't believe I'm typing) posted that they will return sometime in summer 2022.

No word on pricing or anything like that, but chances are, these will be higher than the were at the shutdown, because pretty much everything else is as well.  Perhaps they want you to forget that these were fairly reasonable back then.  In any case, this is good news, as it was yet another transportation option offered directly by Disney.  Sometimes shared bus or monorail service doesn't cut it in particular circumstances, so guests have the ability to book private rides and get to the parks when they need to.  They were still doing this via Uber and Lyft anyway, so it made total sense for Disney to get in on that action.  Plus, who wouldn't want to ride in an SUV or van with Minnie's polka dots on it (Minnie ... van ... get it?) 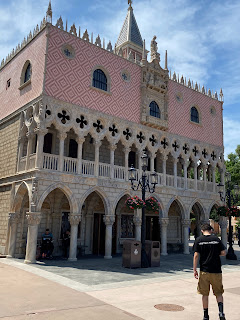 In the best news of the week, Disney's cultural representative program returns!  This is most important for Epcot, a park which thrived off of the diverse culture and authenticity of the cast members working in their representative countries in World Showcase.  Like so many other things, this program had been suspended during Covid, and when the parks reopened, Epcot was missing something.  Per their press release:

We know how much our guests and cast love the program and have been waiting for just the right moment to reintroduce it. As we continue to bring back more cast and guest experiences, we are encouraged by the progress we’re seeing in recent health trends, including the return of international travel and the expansion of vaccine availability around the world.

Right now, we are reaching out to participants from select countries whose program was shortened, cancelled or waitlisted in 2020, as well as those who had an offer and had not yet arrived, and offering them the first opportunity to reapply. We will then invite others to apply soon.

We are doing this in a thoughtful and responsible way with the safety of our participants and working cast top of mind. With this phased re-introduction, initial recruitment will start in Germany, Norway, Italy, France, UK, and Canada for World Showcase at EPCOT. We look forward to bringing additional countries on board and sharing applications with them once they clear travel restrictions and / or have CDC-authorized vaccine availability.

This is great news, not just for Epcot and other places where this program pays dividends, but as another sign of normalcy in the parks and the world at large.  Disney parks feel alive when they are firing on all cylinders and this is another huge step in the right direction.  I'm so happy for everyone who will get to be a part of this in the near future

As is tradition, Disney extended park hours for the week of April 10-16 today, Friday, March 25.  This is a common practice, as hours are announced months in advance and only a few weeks out do they become final and official.  Since this is still in the heart of Easter/Spring Break season, the hours are extended in the same manner as the previous few weeks, as follows:

Early entry for on property guests starts thirty minutes before official park opening time (and often unofficially starts earlier).  Extended evening hours for deluxe resort guests remain the same for this week, because Epcot (4/11) and Hollywood Studios (4/13) close at 9:00, so those extra hours are from 9:00-11:00.  The extended evening hours at Hollywood Studios are (so far) a one time thing - Magic Kingdom gets the extended hours back the following week.