Disney officially released some new concept art and details regarding the Epcot transformation that is currently ongoing.  We're going to take a quick look at what was revealed here, and talk about what is (and isn't) mentioned in the details.

The Epcot overhaul or transformation or whatever you want to call it, has been in the works for a number of years now, beginning pre-pandemic.  There have been sporadic updates since then, and some of that work has been eliminated or cut back, likely due to cost and trying to recoup some of the pandemic loss.  Some of that will be addressed below.

The official Disney Parks Blog made the following announcement; our commentary follows:

World Celebration will offer a beautiful hub divided into several different gardens, with a central planter based on the five-ring EPCOT logo. Filled with ample seating and shade, you’ll be invited to connect with one another and the nature around you in this lush new area. Each of these gardens will have their own identities, and they’ll change along with the festivals throughout the year.

At night, the gardens will take on a whole new life, as you can see here. They’re designed to be enjoyed in the round, where lighting immerses you in the nighttime experience that will evolve through the seasons.

This all surrounds CommuniCore Hall and CommuniCore Plaza, a multi-use facility and outdoor event space, respectively, that bring the park’s international festivals to the center of EPCOT. CommuniCore Plaza will have the flexibility to host intimate musical performances that extend out into the nearby gardens, as you can see in the rendering above, as well as large-scale concerts.

This new facility, which you can see in the upper-right side of this rendering, is inspired by the original EPCOT aesthetic apparent throughout the park’s transformation, including the timeless triangular geometry most prominently featured in Spaceship Earth. Even the CommuniCore name reaches back to the origins of EPCOT while also emphasizing the park’s central idea of community.

There's a lot to talk about here.  Let's start with the stuff about CommuniCore Hall and Plaza.  This essentially takes the place of the multi-level festival center, which had been announced for this space originally.  That had since been taken off the table and expectations had been lowered.  This is the biggest shame in all of this, since that festival center looked incredible.  It was architecturally interesting, and teased a great viewing location for Harmonious (or whatever nighttime spectacular comes after that).  This likely would have been sold as a dessert party upcharge, but still, I was really interested to see the views from that unique angle.

Instead, CommuniCore just seems a little ... boring?  It actually seems a lot like the space that had been there previously, just updated a bit.  This brings up the question of whether such a scaled back building necessitated the multi-year sea of construction walls and dirt that have taken over the center of Epcot, making traversing the area a difficult slog.

I will say that I'll reserve final judgment until I see it, and anything will look better than the mess that currently exists there.  We saw the newly opened Connections Cafe and Eatery on our last trip, and while there's nothing inherently interesting about that space, it has an open, airy look that appears to be what they're going for with CommuniCore as well.  The same is true of the Creations Shop in that same area.  At least there will be some uniformity there.  And the ability to walk from one side of the park to the other will be worth a lot, once it actually happens. 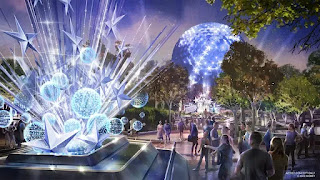 One thing (among others) not mentioned here is the overhaul of Spaceship Earth, which had been announced way back at the beginning of this project and would entail that iconic ride being down for likely a year or more.  That still has to happen at some point to fix some mechanical issues, but I imagine they're waiting to complete some of this work before they go and take that down as well.  Basically, enjoy it while you can in its current form.

Most of this post involves the changes to World Celebration, as that makes up the central area of the new Epcot.  There are other changes happening as well (see more here) and they just updated their information about Journey of Water, Inspired by Moana coming to World Nature.  In totality, these changes should give Epcot a much needed refresh.  It might not be what people had hoped for (and certainly less that what was announced) but a lush, green area of Epcot will be a breath of fresh air (I guess literally) and finally put this phase to rest.