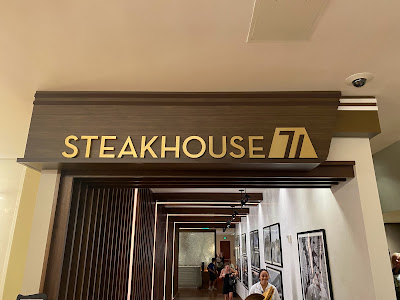 Steakhouse 71 is a new restaurant at Walt Disney World, located in the Contemporary Resort just outside of Magic Kingdom.  We recently had the opportunity to have lunch here, so this post will talk about what we ordered, what the atmosphere is like and whether you should spend your hard earned vacation dollars here.

Steakhouse 71 took the place of The Wave at the Contemporary, opening just in time for Walt Disney World's 50th Anniversary Celebration.  The "71" in the name refers to the year WDW opened, and is a tribute to Steakhouse 55, which was a restaurant at the Disneyland Hotel in California at one time (the "55" there being the year Disneyland opened).

This restaurant is unique in Disney World for having a distinct menu for breakfast, lunch AND dinner.  Many restaurants have a breakfast menu, but the lunch and dinner menus are often similar if not exactly the same.  Not the case here.  We chose lunch over dinner for a few reasons - one was that we were already doing a couple of high cost dinners and this would have been yet another one (lunch is substantially less expensive).  Plus it fit our schedule better, and broke up what would have been an exceptionally long day at Magic Kingdom.

Steakhouse 71 is easily accessible on the ground floor of the Contemporary.  We walked from Magic Kingdom, though the monorail probably would have been quicker.  Once you check in at the host stand outside, you walk down a hallway to the restaurant proper.  There are some great photos from the Disney archives here, plus some unique art.  I felt awkward stopping to look at this stuff, but if you have a chance, it's definitely worth taking some time to experience. 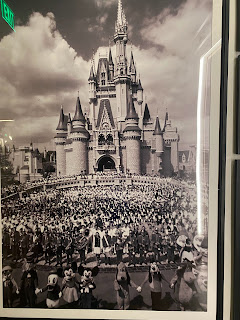 The main dining room itself is one big open space.  There are plenty of overhead lights and a zigzag carpet that make it feel bright and inviting, which is tough to pull off in a room with no outside windows.  The original announcement says it has "fun design elements from the '70s and hints of our Florida heritage."  I'm no expert, but I think that general vibe comes across.

I had heard rave reviews about the Stack Burger (signature blend of beef, American cheese, lemon aioli, red onion, house made pickles on a brioche bun) and that was going to be my order.  But I saw something else that caught my eye, so my wife got this instead.  I had a bite and it was wonderful and juicy.  It's also not listed on the menu, but it's topped with pork belly (not sure if this is some kind of "secret" or anything; the waitress confirmed that this would be on it before we ordered). 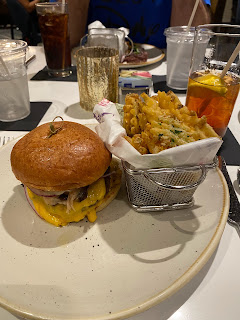 I ended up getting the steak "frites" (hanger steak, garlic parmesan waffle fries, chimichurri, truffle aioli).  Everything about this sounded like something I would want, and it didn't disappoint.  Hanger steak is not a cut of meat that I have very often, but it worked really well here.  Unlike the chimichurri at 'Ohana, I thought this added a lot to the meal. The fries were an absolute highlight as well, and as evidence, my kids kept trying to take them from me. 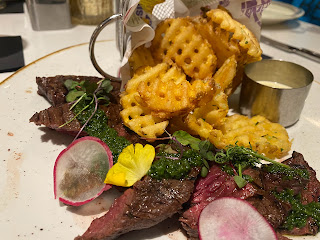 Speaking of kids, the kids' menu is the same for both lunch and dinner.  That was yet another reason we had lunch here - I knew my kids would be interested in the beef filet regardless and they both loved theirs.  In fact, for a somewhat upscale restaurant with little Disney theme or character (at least for kids), both of them raved about this restaurant and named it one of the highlight meals of our trip.  Take from that what you will.

The lunch menu has a lot of variety and based on what we got, you probably can't go wrong here.  As I said, the dinner menu is different and is largely based around various steaks, hence the moniker (some real detective work there!).  Based on my hanger steak, I wished I had had the opportunity to try a filet or strip but there's always a next time.

Despite this being lunch, we were drawn to the Steakhouse 71 chocolate cake for dessert.  It certainly is photogenic and eye catching as it comes of the kitchen (a fact which wasn't lost on my family, as they twisted my arm to order it).  I'll admit that I'm not normally a cake guy but this was as rich and decadent as it looked.  I definitely made an exception here. 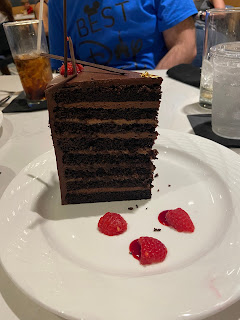 Overall, this was a big success for a lunch I didn't have high expectations for.  Some people might not even know this place exists, or they'll disregard it because it's not actually in the parks.  But considering Magic Kingdom's lack of great table service restaurants, it absolutely behooves you to take the few extra minutes to seek this place out.  People do it all the time for Chef Mickey and 'Ohana, so there's no reason Steakhouse 71 shouldn't be on that short list as well.