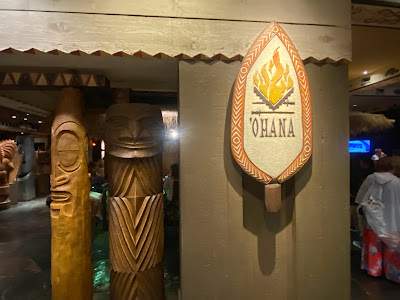 'Ohana is a table service restaurant at Disney's Polynesian Village Resort.  This is a classic and hard to come by destination, and one which has a reputation for being one of the most quintessential Disney experiences you can have, especially outside the parks themselves.

Most people reading this probably have an opinion on 'Ohana already, but this one has always been sort of a "white whale" for us.  On our 2018 trip, this was the only restaurant that we tried to get a reservation for, and failed.  In 2020, we had a reservation ... but that trip was ultimately canceled due to Covid-19.  In 2021, we made up for that lost trip but 'Ohana had yet to reopen (though it reopened about two months after we had visited).  Finally, in 2022, we had an opportunity to check it out and see if it lived up to the hype.

'Ohana fits with the South Pacific setting of the Polynesian as a whole.  It's located in the main longhouse building, conveniently accessible to the monorail station at the Poly.  A restaurant called Papeete Bay Verandah opened in this location when the Polynesian opened for Walt Disney World's opening day, October 1, 1971.  That restaurant later closed and reopened as 'Ohana in 1995.

The restaurant serves breakfast from 7:30 until noon daily, and dinner from 3:30-10:00 p.m. (there is no lunch service)  In the past, breakfast had been a character meal, featuring Lilo and Stitch (after all, 'Ohana means family as they note in that movie many times, so what better place to meet those characters?)  Since reopening, the character component of that meal has not yet returned, though I suspect it might shortly, now that the rules governing character meet and greets have been loosened.

We didn't sample the 'Ohana breakfast, though we had a reservation at one point.  We ended up scoring a late dinner reservation on that same day, so we canceled the breakfast.  The dinner is mostly where 'Ohana gets its reputation anyway, so I think we made the right choice.  The restaurant itself is surrounded by tikis and Polynesian plants and feels very welcoming after a long day at the parks.

Dinner at 'Ohana is served family style, meaning the servers bring you heaping trays of food and you can taste what you want (and avoid what you don't).  This eases the trouble of deciding what you want (because in this case, you can have everything offered to you) and if you finish everything or even one dish completely, you can ask for more (spoiler alert - this was not our issue!)

We found the service to be incredibly fast here, possibly because the plates are being prepared constantly and ready to be brought out. Our food came out in sequence but right on top of one another, so I'm going to mention them in the order of a more traditional meal, starting with the bread service.  The 'Ohana signature bread is made with pineapple and coconut (not sure if this is the same as the breakfast bread, which is more often talked about online).  This is light and delicious - we actually asked to take the rest back to our hotel room to have for breakfast the next morning (and they not only gave us what we had left, but an entirely new loaf as well).

Next comes the mixed greens salad with citrus vinaigrette.  I didn't find anything particularly special about this salad, but I will say that it was nice to have, as greens are often lacking at dinners throughout Walt Disney World.  The other food was coming out quickly, so I didn't have a chance to savor the bread and salad like I might at another restaurant while waiting for our entrees.  I'm not complaining, though.

The next "course" was what I consider to be the highlight of the dinner. A skillet appeared with pork dumplings in a garlic-chili sauce, honey-coriander chicken wings, (the famous) 'Ohana noodles and roasted broccolini.  There's a lot to unpack here.  The broccolini is fine, but can easily be overlooked when talking about the rest of this dish.  The pork dumplings were delicious, and the honey-coriander wings were probably my favorite item of the night.  They are saucy without being TOO saucy, with a sweet bite from the honey.  I have actually attempted to recreate this at home and while I did a pretty good job, if I do say so, these were much more impressive. 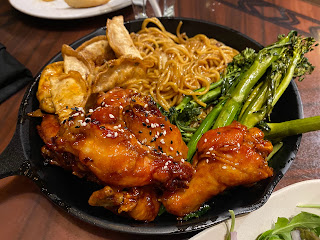 And I can't forget the 'Ohana noodles.  More than anything else, this dish is what people think about when they think about 'Ohana.  This was one reason there was a ton of outrage when 'Ohana reopened last year without them. Thankfully, that was rectified quickly, and everyone is back to enjoying them.  They are pineapple glazed yakisoba noodles, typically found in many stir fry dishes.  I don't know if they add anything else (besides Disney magic) but they live up to their reputation, in my opinion.

If that wasn't enough, then the "main course" is presented.  They came as three different skillets - first is the wood-fire grilled teriyaki beef. These were soft and delicious, but some of the pieces were a little big to be eaten in one bite.  Then there was the grilled chicken with Polynesian-inspired chimichurri sauce.  The grilled taste of the chicken is great, though I don't think the chimichurri added much in this case.  These are also on the bone, which helps enhance the flavor but makes them messier to eat.  Speaking of which, the final dish here is the spicy peel-and-eat shrimp.  I loved the flavor on these, but peeling them is a bit of labor (and if you aren't used to seeing the legs on a shrimp - as my kids weren't - it can be a bit jarring).

Overall, all of those dishes delivered.  My wife noted that it was a little awkward switching between food you were supposed to eat with a knife and fork and ones you were supposed to eat with your hands.  This is true, but I didn't stop me from digging in fully.  As noted, we didn't actually finish any of these in their entirety.  It's a LOT of food, though if you like one particular item, I'd focus on that and get seconds.

The meal ends with 'Ohana bread pudding, served a la mode with vanilla ice cream and a homemade caramel sauce.  We were stuffed after eating dinner but there was no way to turn this down.  I'm not normally a bread pudding guy but this was wonderful and with the ice cream and caramel sauce in each bite, I found myself quickly finishing it, even when I didn't think there was room.

By virtue of our late seating time, we had the opportunity to see the Enchantment nighttime spectacular from the comfort of our seats. Well, at least we could see what was visible high in the sky.  That was worth something in my mind, though I wished we had had a table by the window while it was happening.  They also piped in the soundtrack, which was a really cool way to end our night.  When the show wasn't going on, a performer with a ukulele provided some nice, appropriate background music. 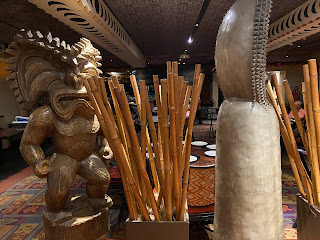 I haven't mentioned the price yet, though I need to in order to answer the question of whether 'Ohana is "worth it."  Given the nature of the meal, this is a price fixe dinner, and it comes in currently at $55 per adult and $33 per child.  That can be a bit steep, especially when "adult" at Disney is considered anyone ages ten and up (our twelve year old, for example, didn't get his money's worth, given the amount he ate).

We loved this meal.  Is it worth the price?  I would say yes, but with a caveat.  If this is your first (and possibly only) time dining here, it is worth experiencing.  This was our biggest splurge of the trip in terms of money spent on food and I regret nothing. But given how hard it is to get a reservation and the high cost, I don't feel the need to attempt this one again on our next trip.  For some people, it might be a tradition.  But for us, it was great to finally get to do it and say we ate there.