Genie+ Use in Real Life 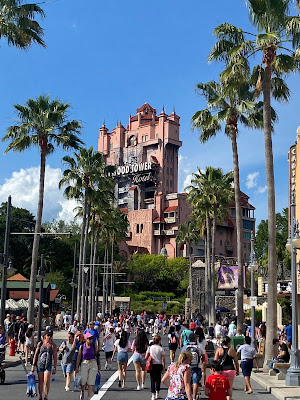 Genie+ is a service Disney introduced late last year for use at Walt Disney World and Disneyland.  This service effectively took the place of FastPass+ (at WDW) and FastPass/MaxPass (at Disneyland).  Genie+ is a paid service that allows the user to book a return time for many rides and return via the Lightning Lane, which would allow one to bypass the (longer) standby line.  I wrote a general post on Genie+ that looks at this in general terms and discusses how to use it.

Recently, we had the opportunity to test out Genie+ in real life for the first time.  This post will take a look at how and when we used it, the best and worst days we had while using it, and what we could have done differently.  This post will NOT be a recommendation for or against Genie+ - I have a separate post coming that will detail all my feelings in that regard.

For our recent trip, we did not purchase Genie+ in advance for the duration of the trip, but instead decided before we went to the park each day whether we would purchase it for that day or not.  Our prior recommendation based on what we had been hearing from others was that we would purchase it for Magic Kingdom and Hollywood Studios, but not for Epcot or Animal Kingdom.  We mostly stuck to that plan, though we did end up purchasing it for our second Epcot day, which will be discussed below.

The one park we did not use Genie+ in at all was Animal Kingdom.  This was by design, mostly because their attraction lineup is not compelling for a full day and we had a strategy to work around using it and doing all the biggest headliner rides via standby lines.  We did cave and purchase an Individual Lightning Lane (ILL) for Avatar Flight of Passage.  My original goal was to rope drop this ride, but we were slightly later than I had envisioned (even though we arrived at 7:00 a.m.!) and I didn't want to devote a long standby wait at that time.

Instead, we purchased the ILL, which ended up having a return time of the afternoon, and then did Na'vi River Journey, Expedition Everest and Dinosaur via standby in short order, before having to tough out a longer wait for Kilimanjaro Safari.  Ultimately, I was pleased with our strategy here.  We had to leave this park before closing - if we had stayed, I might have decided to hold off on Flight of Passage until towards the end of the day, as most people finish and leave Animal Kingdom before closing.  Since that wasn't an option here, we made the purchase.

In any case, as far as actually using Genie+, I wanted to highlight a couple of specific days, to present the good and the bad.  Let's start with the good - we used G+ on our arrival day at Hollywood Studios. There were a lot of logistical issues with this day, starting with the fact that we had to wake up at 3:00 in the morning to go to the airport.  We were also in the air at 7;00 a.m., meaning we couldn't make our first selection then, putting us behind the first wave of guests going to the park.  Finally, we planned to spend a portion of our day at Disney Springs, only going to Hollywood Studios in the afternoon and staying until closing.

With all of those caveats, did I really say we had a GOOD day using Genie+ here?  Absolutely.  I knew ahead of time that we weren't going to attempt to use G+ on Slinky Dog Dash, since that attraction is often gone within minutes of 7:00.  We also didn't attempt to use it on Twilight Zone Tower of Terror, since neither of our kids wanted to ride that one (and it is currently undergoing a refurbishment that takes out half of the ride capacity, inflating the wait times to tremendous levels).

So what did we do?  My first priority was Millennium Falcon Smuggler's Run.  This is often one of the hardest G+ attractions to get.  I booked as soon as I had cell phone signal again, while still on the plane around 8:30.  Our return time was in the evening (I can't remember the specific times, and I didn't screenshot it) which worked nicely for our plan.  The park opened at 8:00 that day, so we would have been eligible to book another attraction at 10:00, but since we had booked the first one at 8:30, we needed to wait until 10:30.

I specifically remember walking in the shops at Disney Springs and pulling out my phone to book Mickey & Minnie's Runaway Railway.  The return time for that was later in the evening but it was available, so I took it.  At 12:30, I booked Toy Story Mania, with a late afternoon return time.  I had "tested" the return times from home for weeks, and I had never managed to get all three of these in the same day, so I considered this a win already.  And at 2:30, as we were headed to the park, I booked Star Tours.  This was probably not necessary, as it doesn't often have high wait times, but we needed another ride to book and this was as good as any based on what was available.

So before we ever set foot in the park, we had the following lined up, in this order:

This is subjectively the "best" way to use Genie+.  If we had been spending a full day there, we would have attempted to get earlier return times, therefore getting an opportunity to use Genie+ more often.  But there was no guarantee that it would work that way (more on that below) and this plan allowed us to stack these reservations in the afternoon.  Between exploring the park, taking photos and eating dinner, we basically just did the rides listed here and breezed through the Lightning Lane at all of them.  If we had had more of a gap between rides, we would have had to fill that time by doing rides standby, and in the late afternoon, wait times are among the worst of the day.  We avoided that here and felt like we really accomplished something.

At Magic Kingdom, our goal was to use Genie+ more frequently and turn around our return times more quickly.  We made one mistake here, though, and it was mostly a function of Disney's less than stellar IT.  I attempted to book Jungle Cruise first thing on our Magic Kingdom morning.  I saw a nice early return time ... until I actually tried to to go the next screen, whereby my app just spun and never progressed.  I had force close the app twice in order to get past this.  When I eventually did, our Jungle Cruise return time was 5:20-6:20.

Why was this a problem?  For one, Magic Kingdom opened at 9:00 that day.  Meaning that if we had had an early return time (say, 10:00-11:00), we would have been eligible to book another attraction as soon as we tapped in and give us another shot at a big attraction early.  But since we were stuck with our late return time for Jungle Cruise, we weren't eligible to book anything else until two hours after park opening, 11:00 in this case.  We also took a long afternoon break this day, since it was the night of the Extended Evening Hours, and we wanted to nap, plus we had a sit down lunch scheduled.

What could we have done differently?  I should have pivoted upon the app crashing and just booked something else earlier. This might have meant missing out on Jungle Cruise, though I'm not even sure we would have, since there were (late) return times listed for a while when I checked the app.  But I should have been more flexible with our options instead of locking in on one ride.  I encourage anyone reading this to keep your options open and be ready to switch it up at a moment's notice.

Ultimately, Magic Kingdom isn't even our example of a bad use of Genie+.  For that example, I'm going to talk about Epcot.  Epcot is generally one of my favorite parks, but on this trip, we were frustrated there at almost every turn.  Our first day there, we did not purchase Genie+ and I began to regret this when the lines for most attractions were quite long.  So by our second (full) day there, I was prepared to buy Genie+ to help us out. 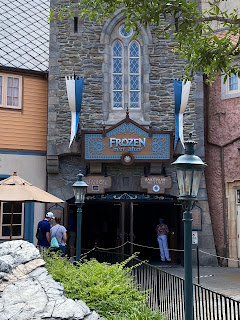 We had already ridden Remy's Ratatouille Adventure (this park's only ILL ride at the moment) the night of our Extended Evening Hours, and we had also done Soarin' Around the World.  I mention these two attractions because they are two of the four headliner rides at Epcot.  That left Frozen Ever After and Test Track.  I figured I could knock these out with Genie+ rather easily.

This ended up being wishful thinking on my part.  I hadn't done any G+ testing from home at Epcot, so I don't know if our experience was common.  But at 7:00, I booked Frozen Ever After right away, and ended up with a good return time in the 10:00 range (can't remember exactly).  I know it must have been around then, since as soon as we tapped into Frozen, I began looking for our next G+ for Test Track.  But by then, there was no more availability, and as much as I checked periodically throughout the day (often times are replenished every so often), I never saw one.  In fairness, the same was true for Frozen.  Effectively, I was only going to get one of these rides via Genie+, not both, no matter which one I attempted first.

In terms of what we could have done better in this case, the only other solution would have been to rope drop the other attraction.  This would have allowed us to hit two of the three most popular attractions by 10:30, a more promising start to the day.  Unfortunately, we had gone to sleep far too late for that to be practical in this case, hence why I purchased Genie+ in the first place.  While we used Genie+ to pick up another ride on Soarin', as well as some of the "lesser" attractions, this wasn't my intention in paying the money for Genie+ on this day and I found myself disappointed that we didn't maximize its use.

This post was mostly to show some real "boots on the ground" experience using Genie+, and to talk about the pitfalls and the promise.  My general advice is to keep your expectations low and to use G+ to stack reservations later in the day so you can get through a lot of attractions quickly.  What you do before that is up to you, but don't count on being able to turn around your reservations very quickly in the mornings.  That was our experience, at least.