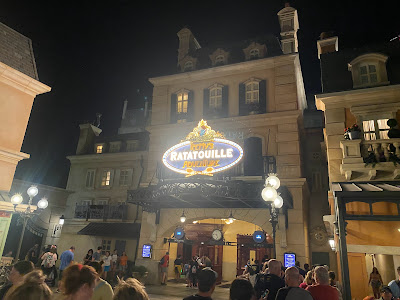 Remy's Ratatouille Adventure is a trackless dark ride at Epcot.  This post will talk about the queue, the ride itself, what other ride or rides it resembles and whether you should go out of your way to experience it in your time at Epcot.

Remy opened on October 1, 2021, the start date for the Walt Disney World 50th Anniversary Celebration.  The ride was completed for quite some time before this date, but Disney saved the opening to be a "counter program" of sorts against Magic Kingdom that day, which was surely going to be (and was) the place where most guests wanted to be on the actual anniversary date.  The opening of Harmonious at Epcot was the same concept.

As I said above, this ride is a 3D (Disney refers to it as "4D" on their website, probably due to the special effects that you can feel on the ride - think Philharmagic) trackless dark ride.  The dark ride has long been the staple of Disney rides (most classic rides are dark rides here) and with newer technology, trackless has become the norm.  That gives the vehicles more range of motion so that you aren't always experiencing the attraction in exactly the same way every time, like you would with a track.

Backing up a little, Remy is located in the France pavilion in Epcot's World Showcase.  If you're not familiar, France is pretty far back from the main entrance, located between Morocco and the United Kingdom.  France is conveniently located next to the International Gateway entrance, however, so if you're staying at one of the walkable Epcot area resorts (Beach Club, Yacht Club or Boardwalk) or are coming in from the skyliner, it makes for a much easier rope drop experience.

Disney actually built an expansion to France in preparation for the opening of this attraction. France used to dead end as you walked along the water, preferably enjoying an ice cream from L'Artisan de Glaces.  Now you can walk back into that area and make a left, where you will find Remy as well as the new La Creperie de Paris restaurant.  Putting a ride - any ride - here was a good idea, in my opinion.  There aren't a lot of attractions in this area of the park (unless you like the Beauty and the Beast sing-a-long or any of the Circlevision 360 movies) so this was a good way to draw people back into the furthest reaches of World Showcase.

The queue for Remy starts outdoors before turning indoors. There is a beautiful marquee sign with the name of the ride on the building before you go in.  Once inside, you wind your way through various hallways with a lot of great hidden Ratatouille details.  At one point, there's a room that looks like you're back outdoors again, with a sign for Gusteau's restaurant that talks to you while you pass the time.  The queue is very nicely done, though some of the rooms we were in were noticeably lacking in air conditioning - I assume this was a bug and not a feature, as there would be no reason to make the guests waiting to get in even unhappier. 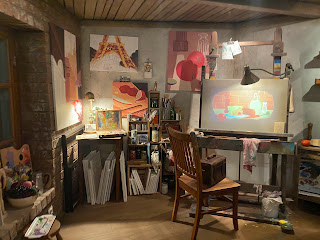 The ride loading area is interesting as well - after picking up your 3D glasses, guests are loaded in two different sections, though they're not next to or across from each other but rather perpendicular.  This doesn't really mean much, but it's a good early showcase for how the ride vehicles move, as they come out in tandem to one side or the other.  The process is quick and efficient.  The ride vehicles themselves look like miniature rats.  I don't want to spoil much but Disney's own description of the ride is that you shrink down to Remy size for the duration of your adventure.

From there, not surprisingly, hijinks ensue.  Your vehicle scurries around the kitchen of Gusteau's as well as other locations.  You are always at eye level with Remy, meaning everyone and everything around you seems supersized. This is largely done through screens, though there are some impressive real life backgrounds as well (one large fish is especially cool to look at).  Because of the nature of a screen based ride, I have heard stories of people feeling nauseous while riding it.  Normally I am sensitive to this kind of thing, but I had no trouble in that department, though of course, everyone is different.

In terms of comparison, the ride this most resembles at WDW is Mickey and Minnie's Runaway Railway at Hollywood Studios.  This is due to the trackless nature of the ride (Rise of the Resistance is also trackless, but is so much its own thing that there are no comparisons for that one) and the use of screens to make you feel like you're in the setting they're showing you.

I think Runaway Railway is a superior ride, however.  This might seem strange, because that ride opened before Remy, so you might assume that the technology has gotten better and therefore Remy should look better in general.  But Remy is actually a direct clone of a ride at Disneyland Paris (Ratatouille: L'Aventure Totalement Toquee de Remy, and hopefully that's the last time I have to write that out in a blog post) that opened in 2014.  At the time, the trackless technology was groundbreaking.  But it has since been put to better effect on other attractions and it makes Remy look ever so slightly behind the times, even as it just opened to American audiences.

This isn't to say that Remy is a bad ride.  On the contrary, we all had a lot of fun riding it and it's absolutely something I would ride again.  Right now, though, this is one of the longest wait times at the park, due to the fact that it is new.  Once some of that new ride smell wears off, hopefully the lines will be commensurate with the experience.  We'll get a chance to find out soon, as Guardians of the Galaxy: Cosmic Rewind is about to open and that will be a massive draw at Epcot, leading to possibly the longest wait times on the property.

Overall, Remy is a ride you don't want to miss at Epcot.  It is currently available via standby or Individual Lightning Lane (ILL) though that may or may not change when Guardians opens.  If it gets bumped down to regular Genie+ tier, it becomes more palatable and will do wonders for the park's slate of rides in terms of spreading out availability.  There are a few rides at Epcot that I would prefer over Remy but it is a worthy addition to that park.