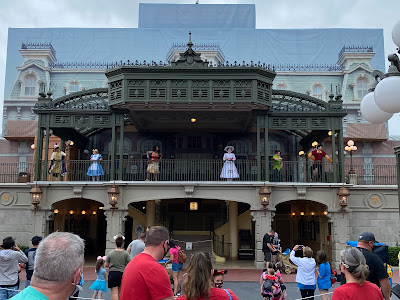 We haven't had a lot of updates lately, but there have been a few Disney news items we've been keeping our eye on, and figured this was a good opportunity to talk about some of them.  None of these are particularly earth shattering by themselves (particularly the last one here!) but there are some useful nuggets of information here.

Beginning this week, Disney made some tweaks to its park reservation system.  You might think that these tweaks will make for a smoother, easier experience, right?  Not really.  In fact, most of these changes probably wouldn't impact the overwhelming majority of guests. This mostly deals with different ticket types that a guest can hold at once, including an Annual Pass and a regular day ticket.  I won't get too into the weeds on these, since like I said, it affects very few people from a practical perspective.

Another minor change is that a guest can change the email address connected to their park reservation.  This can be a different email address than the one associated with your My Disney Experience account.  I'm not sure what the benefit is here, but perhaps there is a small segment of people for which this would matter?

The only change of substance that I can find here is that now you have the ability to modify your park reservation.  Previously, the only way to change your park reservation was to cancel your existing one and make a new one.  For almost all situations, this was a formality, but it was still a nerve wracking experience to actually cancel something without being sure of getting a replacement.

Now (in most cases), reservations can be modified.  So presumably, you can look at what parks are available as you attempt to modify, and if there is nothing available that you want, just cancel the transaction and keep your existing reservation.  This is how the old Fast Pass+ system used to work as well.  Now that this change has been made, one would hope that Disney brings this back as part of the Genie+ reservation system as well. There's no (good) reason why this can't be done.  Perhaps this is the first step towards that?

Disney Enchantment, as you probably know, is the current fireworks/projections/nighttime spectacular at Magic Kingdom.  This debuted in 2021 for the start of the 50th Anniversary celebration.  I've had some unflattering things to say about Enchantment as a show, which I won't rehash here.  This is still a nighttime show at Magic Kingdom, and has inherent value regardless.

One of the things that was missing from this show (and the anniversary as a whole, really) was a celebration of Disney's past.  The show features a lot of current Disney IP, which makes sense in a vacuum, since the core audience of children will probably be most familiar with these.  But for a show designed to be part of an anniversary celebration, there was a distinct lack of nostalgia. 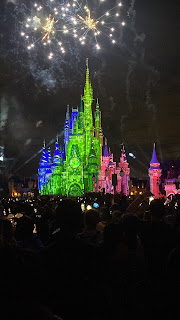 This was rectified to some degree with Disney adding a new introduction to Enchantment.  This is a two minute segment that features Walt, Roy O. Disney and plenty of retro Disney clips.  You can watch via Scott Gustin's Twitter.  This is long overdue, and this SHOULD have been part of the show from day one.  If Disneyland Forever (along with shows for the international parks' various anniversaries) can do it, this was a no brainer. Better late than never?

Disney recently sent out surveys to guests and one of the questions involved whether guests knew there was an anniversary celebration going on, and to what extent.  That they had to ask at all sort of shows that they didn't lean into the 50th as much as they should have.  Enchantment is just a microcosm of the larger problem. But if guests are ambivalent towards this show, could it mean the return of Happily Ever After once the anniversary celebration is complete?  Disney Tourist Blog talks about this in greater detail here.  I'm not completely sold on this idea, but mostly because I can't bear to get my hopes up only to have them dashed again.

And now for some sad news - the company that makes Disney's bath products, H20+ (why does everything need a "plus"?) is retiring their brand at the end of the year.  That means that the products that have been supplied to WDW, Disneyland and Disney Cruise line for over 15 years is going away.  If you've stayed at a Disney hotel, you'll probably be familiar with them even if you didn't realize it - any soap, shampoo, body wash, etc, has been H20+ for as long as most people can remember.

I don't have any particular nostalgia or memory associated with these products, so I don't have much of an opinion on here. These items were fine, but nothing spectacular.  We may have "accidentally" brought a couple of things home from time to time, more as a reminder of the trip than because we loved the products so much that we had to have them.

Some people might have certain memories triggered by the scent of their vacation, and like I said, this isn't something that I have (which is strange because often the littlest Disney things make a big impression on me).  No word yet on what replaces H20+, but whatever it is will have the opportunity to create some scent-specific memories on future trips.