The Uniqueness of Epcot at Rope Drop 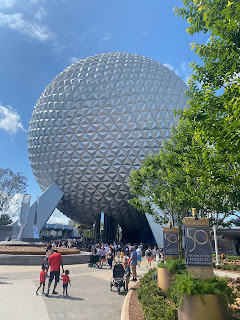 One of the best ways to beat crowds when going to Disney parks is the proverbial "rope drop."  This is so named because there used to be a physical rope that blocked off the park, and the people who arrived before that time were lined up until the rope was, um, dropped, and they were allowed to run (or "walk quickly") to their desired destination.  That term has stuck since then and has become part of the Disney goer vernacular.

With the advent of Early Theme Park Entry, rope drop has changed slightly.  Now traditional rope drop (at official park opening time) is largely useless, since the on property guests have already been in the parks for a half hour, thus eliminating much of that advantage.  There are circumstances where traditional rope drop can still work - if you're planning to hit an attraction that isn't the busiest (or even second busiest) attraction at a given park.  Magic Kingdom has its own unique feature here, in that only half the park is open for early entry; you can still arrive as early as you want and await the regular rope drop for Frontierland and Adventureland (or you can double up by hitting something on the other side during early entry and then lining up for a "second" rope drop).

For the purposes of this post, though, when we refer to rope drop, we're talking about being some of the first people into a park, which in this case means having the ability to access Early Entry.  Sorry off site guests - this one really is a perk to people staying at Disney resorts.  And while most parks have a general rope drop strategy, there is one park that has two different approaches, depending on where you're staying - that park is Epcot.

For those who don't know (which is a surprising number of people), Epcot is the only park with TWO entrances.  There's the main entrance of course, with the stunning site of Spaceship Earth to greet you as you arrive via car, bus or (my favorite) the monorail.  This is the entrance most people will come in through, with the exceptions of the resorts listed below.  The monorail even gives you a quick tour of the park before settling into the station.

But there is a second entrance to Epcot, the International Gateway, that lets guests in to World Showcase.  It's located between the United Kingdom and France pavilions and can be accessed by Friendship Boat from the Yacht Club, Beach Club and Boardwalk.  But since those resorts are so close to the park, the best way to get there is by your own two feet, which is how most people arrive from those resorts (as well as the Swan and Dolphin).

Until 2019, these were the only resorts which had easy access to International Gateway at rope drop.  In theory anyone COULD use that entrance by taking a ride share to one of those above resorts and walking, but it was often more trouble than it was worth and didn't provide much of an advantage (more on that below).

But in September 2019, Disney opened the Skyliner, a gondola transportation system that connects Epcot and Hollywood Studios with the Riviera, Caribbean Beach (the main Skyliner hub), Art of Animation and Pop Century (those last two share a station).  The station at Hollywood Studios is outside the main entrance so those guests join the same lines that everyone else does.  But at Epcot, the station is located at the International Gateway, meaning guests from those four resorts now all come in that entrance if arriving via the Skyliner.

I mentioned above that there hadn't really been a competitive advantage to coming in the International Gateway for much of Epcot's existence, which is true.  Most headliner rides at Epcot were in Future World, so they were easier to access via the main entrance.  Even a ride like Soarin', which is located o the same side of the park as the International Gateway, is a much longer walk than from the main entrance, meaning if the gates opened at the same time, the IG guests were already behind the pack lining up there.

As much as I love the Gran Fiesta Tour Starring the Three Caballeros, this wasn't exactly a big rope drop draw, and there weren't too many other rides in World Showcase at all. In fact, in days past, World Showcase often didn't open until two hours after Future World.  This all began to change in 2016 with the introduction of Frozen Ever After in the Norway pavilion.  Now a ride in World Showcase was one of Epcot's biggest draws. 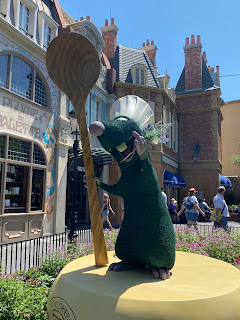 This sort of calculus changed again in October 2021 with the opening of Remy's Ratatouille Adventure in the France pavilion.  There's no question about this one - France is directly next to the International Gateway, and it is therefore incredibly easy to rope drop this ride if you're coming from that entrance and essentially impossible to do it coming from the main entrance.  This wasn't a problem for the first few months, as Remy had a virtual queue (no standby entrance), meaning that there was no "rope drop" for this ride.  That changed in January 2022.

Of course, an even bigger addition to Epcot opened in May 2022, and that is Guardians of the Galaxy Cosmic Rewind.  As of this writing, however, Guardians is in the same boat as Remy had been previously - it uses a virtual queue.  So as coveted as that ride is, it can only be accessed by VQ or Individual Lightning Lane (ILL).  That should change in the near future (more on that below as well).

So for the time being, this puts Epcot in a unique position - there are three rides that constantly have the highest wait times in the park, and they're almost interchangeable.  They are Remy, Frozen and Test Track.  Your resort should dictate your rope drop strategy - if you come in the main entrance, you should go to Test Track first (assuming it's running - it doesn't have the best track record for reliability, no pun intended), then Frozen and then Remy if there is still time.  Those should be reversed if you're coming in the International Gateway.

This stasis is good for the park.  It spreads out Early Entry crowds and gives a unique advantage to the people coming in each entrance.  This also helps with Genie+ distribution, as guests will often prioritize whichever of these rides they can't get to early in the day without bombarding one over another.  Trying to hit all the headliner rides is a good problem to have at Epcot as opposed to any other park right now.

Of course, this is about to change once Guardians drops its virtual queue.  Its placement in the park makes it an obvious rope drop candidate for people coming in the main entrance and an impossibility for the IG guests.  The best strategy for those latter guests is to either purchase ILL for Guardians or save it until right before park close, which often sees the lowest lines of the day.  The silver lining is that the Remy/Frozen/Test Track start to a day will probably be even easier as guests fight to the death in the Guardians line.

On the other hand, this same strategy in reverse will likely be a good one for main entrance guests who avoid rope dropping Guardians.  I sense that the shuffle to Guardians will be similar to that of Seven Dwarfs Mine Train, Rise of the Resistance and Avatar Flight of Passage - practically everyone will be doing it, so if you bypass that entirely and start with Test Track, you'll likely see much lower crowds while you hit all the other high priority attractions.

Guardians is a game changer, and only time will tell how the strategy will work in practice rather than in theory.  But with that ride not relevant to current rope drop strategy, guests should enjoy whichever entrance they come in and appreciate the uniqueness of Epcot.