Walt Disney World has a reputation of being a family friendly place to visit, following Walt's philosophy of having a place where kids and adults can enjoy everything together.  This is one of the things that makes Disney such a unique place to visit.  But to many people (outsiders?), Disney World is considered a destination for kids - a place that adults tolerate simply to take their kids for a "once in a lifetime" trip so that they can say they did it.

Whether that status is justified is beyond the scope of this post, as is the stigma surrounding "Disney adults" (a topic I've considered discussing in more detail at some point).  But on the surface, this is how Disney is seen to many people, and a place like Universal is there to appeal to people who "outgrow" Disney.

But this is far too simplistic of a view, and makes too many assumptions about the average guest.  However, it got me thinking about the four parks at Walt Disney World, and how much (or little) each one appeals to adults as a general rule.  Note that I'm going to talk about the attraction lineups and not so much all the extra activities - if that were the case, Epcot would be the clear winner, as it already has a reputation for being "for adults" due to readily available alcohol ("drinking around the world" has become its own badge of honor) and things like the Eat to the Beat concert series.

So let's assume this fictional adult we're going to talk about is there for the rides, whether because they want to be or because they're there for their kids.  Which park has the most attractions that adults would enjoy?  In short, where will adults have the most FUN when they visit?  Obviously this will depend on the person, but I think we can come up with some sort of non-scientific criteria for this exercise.

The obvious one to be eliminated first in this process is Magic Kingdom.  Yes, there are some coasters there (and when Tron: Lightcycle Run opens, that will be a huge draw) but for the most part, this is the park that trades the most in nostalgia and has the most kid-friendly (and robust) attraction line-up on property.  When people think about Disney being for kids, as stated above, they're most likely thinking of Magic Kingdom above all else (some people conflate Magic Kingdom with Disney World as a whole).

This isn't to say that adults can't enjoy Magic Kingdom - I mean, who has two thumbs and loves this park more than anything, etc?  But it clearly has the most areas with rides that kids would enjoy the most, and it stays truest to Walt's vision of rides that the whole family can enjoy together.  For the purposes of this post, this one doesn't fit the criteria.

Let's take a look at Animal Kingdom next.  There are some very adult-oriented headliner attractions here.  Expedition Everest, for example, is probably the most "intense" coaster on property (intensity is subjective, but I've seen message boards debate this topic and Everest is always at or near the top of these lists).  The main attraction at this park is of course Avatar Flight of Passage.  This certainly can be enjoyed by everyone, but it has a height requirement and can be an exhilarating experience on par with some of Universal's simulator attractions.

Animal Kingdom's biggest problem (as it relates to this topic, and in general) is the overall lack of attractions.  If I'm an adult with one day to spend at any Disney park, I likely wouldn't pick Animal Kingdom because there simply isn't enough to do that doesn't involve animal trails and lots of walking.  Plus there are probably adults who think that Avatar is lame, and they wouldn't enjoy a ride based on that movie (note: these people are wrong).

That leaves us with the two Crescent Lake parks, Epcot and Hollywood Studios.  I addressed Epcot above from an extracurricular perspective.  But what about the attraction selection?  There are some more intense rides here, notably the newly opened Guardians of the Galaxy: Cosmic Rewind, the park's first and only coaster.  Mission Space is also a simulator that can make people feel queasy (does this make it an adult ride?) and Test Track is the fastest ride on property.

But the other headliner rides are pretty tame by comparison - Soarin' Around the World is gentle, as the name might imply.  And both Frozen Ever After and Remy's Ratatouille Adventure are modern takes on the old dark rides. Adults might not see much value in attractions based on intellectual property from kids' movies (again, these people would be wrong, but I'm trying to see things from a different perspective here).

The rest of the attraction lineup at Epcot are all very tame rides, largely geared towards children.  There's nothing wrong with this, of course - Epcot is unique in that there is a big gap in wait times between their top tier and lower tier attractions, which makes it easy to accomplish a lot if you plan correctly.  But on the whole, I don't know if these types of rides would move the needle when it comes to our average adult. 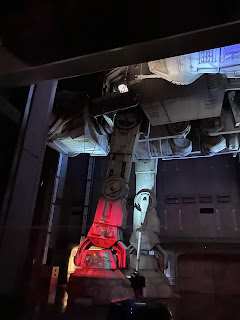 I think you can see where this is going, but my vote would be Hollywood Studios.  First, the general theme (movies!) is the closest correlation to Universal, which mentally puts it in the same space to the average layperson when thinking about what park they might enjoy.  The theme has been stretched and generalized over time, but it still remains, at least in peoples' minds.

Yes, there is a Toy Story Land, which people might associate only with kids. But that land contains a coaster (even if it's a tame one by comparison) and an arcade style, 3-D shooting game.  Adults love stuff like this, right?  Even if you consider Toy Story Land to be for kids, remember that even Universal has kids areas specifically (I'm thinking of Seuss Landing in particular).

This park also contains Star Wars Galaxy's Edge.  Now, Star Wars might be considered a children's product, but I suspect most adults will think back more to when THEY were kids and want to experience it for nostalgia's sake alone (Disney is counting on this, actually).  Star Wars still has a "cool factor" for adults in most cases.

To further the Universal comparison, Hollywood Studios has more simulator attractions than any other park on Disney property.  Millennium Falcon Smuggler's Run, Star Tours, Mickey and Minnie's Runaway Railway and Toy Story Mania are all screen-based attractions. If adults like this type of ride, this is the park for them.  Rise of the Resistance has screen elements as well, and the whole package there is stunning for anyone - kids, adults, Star Wars fan or hater - and is the best ride in this park.

In addition to the coaster referenced above (Slinky Dog Dash), Hollywood Studios also contains a true adult coaster - Rock N Roller Coaster, the only coaster on property to have inversions.  Right near there is the iconic Twilight Zone Tower of Terror, certainly a thrill ride by any definition, as you are dropped from a height at speeds faster than gravity.

With all of these things taken together, Hollywood Studios truly seems to be the park that an adult would enjoy regardless of anything else.  It's certainly kid friendly as well (I mentioned some examples above) but I think it skews older in terms of the average attraction.  It isn't surprising that this park also has the highest average wait times across the board.

Walt Disney World can - and should - be enjoyed by people of all ages.  You can find something to enjoy in every park, from the smallest rides to the most intense ones.  The idea of Disney just being a place for kids to go is a fallacy, though I suspect if you are reading these words, you would agree with me.