The Railroad went down on December 3, 2018, which is more than FOUR YEARS AGO.  That's a stunningly long time to do any kind of work or maintenance on such a seemingly simple attraction.  If you've recently just started going to the parks, you might not even know that the Railroad was a working attraction; instead, you might think that the track was there for decoration and the station was there only for characters to come out and wave to guests below.
At the time of the closure, Disney said that the Railroad was closing for the construction of Tron: Lightcycle Run in Tomorrowland.  How are these things related you might ask?  Because the tunnel for the Railroad runs around the entire park.  Tron's placement at the edge of Tomorrowland meant that the track would have to run around or through the newest park attraction ("through" was ultimately the answer here).
On the surface, this seems plausible.  But there are plenty of issues with that statement.  For one, Tron is (as of this writing) STILL not open.  That's a whole other issue, exacerbated by the pandemic but still seemingly unjustified when it's a clone of an already existing ride.  But I digress.  The point as it relates to the Railroad is that there was no need for that attraction to be closed in 2018 when it was clearly going to be a while (even if things were on schedule) before the work on Tron would affect the existing tracks.
Whatever the case, the Railroad has largely been an afterthought during this time period.  I wouldn't say that I thought it would NEVER come back, but it did seem possible that it was just going to quietly disappear into the land of nostalgia.  Thankfully that was not the case, as Disney announced its return right before the holidays. A present for the hardcore fans, for sure. 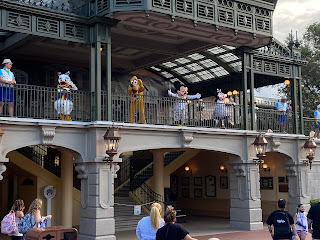 The Walt Disney Railroad officially returned on December 23, with updated narration and fairly long lines (though that would be the case at any attraction at this time of year).  Even if I didn't love the Railroad, having another attraction to soak up some of the crowds is always a good thing.  If you want to see a full ride through of the newly returned ride, check out the always great 4KWDW's video here.
Why do people care about the Railroad's return?  Nostalgia is a big part of it.  The Railroad is an opening day attraction at WDW, which carries a lot of weight with most purists and big Disney fans.  Plus as many people know, Walt Disney was a huge fan of trains (he had a scale model running through his backyard) and this pays homage to that love and his vision for what he wanted in his parks.
While a slow moving ride around Magic Kingdom isn't thrilling, it has a lot of appeal.  I've talked about my love for the Tomorrowland Transit Authority PeopleMover and while I personally like that one better, the concept is the same (except the PeopleMover only gives you a tour of one land while the Railroad covers the whole park).  It's actually closest to the Liberty Square Riverboat in many regards (though again, that ride only covers Liberty Square and parts of Frontierland).  All in all, these "people mover" type rides give off a kinetic energy to the park, which makes it feel more lively and alive.
Personally, I like that there are also parts of the park that can only be seen if you're on the Walt Disney World Railroad.  There are also some neat perspectives that you can only get this way, notably the Frontierland station right beside Splash Mountain.  And while it's often simpler and almost always quicker to walk, the Railroad can be used to actually take you from one land to another if you need to get off your feet.
So while this isn't earth shaking, it's nice to have the Railroad back.  Once Tron actually opens, the perspective underneath that track will be unique and interesting to see as well.  I'm mostly glad that we didn't lose a piece of the past and even if four years was too long for any ride to be offline, it's better than being retired permanently.
at December 27, 2022