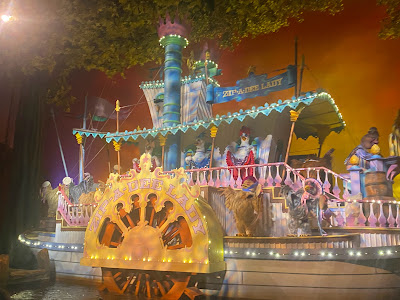 Music is such a huge part of a trip to Walt Disney World, from the ambient vibes as you walk from land to land to the resort-specific music piped into the bathrooms.  But nowhere is music a bigger factor than in the attractions themselves.  While you can probably picture a ride that you love, when you close your eyes, the thing you remember most is likely the music.

I wanted to make a list today of some of the best songs from Disney attractions.  These are all current attractions - without spoiling it too much, I wanted to write this now because the number one spot on here belongs to an attraction that is soon to be closed and turned into something else.  So while it's still here, let's talk about how great it is, along with all these others.

I usually like to do top five lists, but there are so many viable choices here, I upped it to eight.  This doesn't include the entire soundtrack to shows (though one song from a show appears - it will be discussed below).  I will say, if Happily Ever After was currently running, that theme song certainly would have made it.  Maybe next year we'll reexamine the list.  This is also not an endorsement or referendum on the attraction itself - many times, the music makes the attraction much memorable (or even legendary) but in some cases, the music is iconic in its own right.

As a side note here, one of my original inspirations for this post was the song "Destiny", which was used as exit music for Mission: Space in Epcot.  That was a perfect example of a ride that I don't love but a song that was phenomenal.  Seriously, this could have been a hit on the radio.  Alas, the song was removed when the ride was refurbished in 2017, but I wanted to make a special note of it here because it's awesome.

8. Journey Into Imagination with Figment - Epcot (One Little Spark)

This is a good example of what I said above.  This attraction is often panned by Disney fans as a pale imitation and unworthy successor to the original Journey Into Imagination.  I'm not disputing that!  I still find this ride to be fun but it could definitely use some updating.  Literally anything would make the Disney fans happy.

But the song, One Little Spark, is great as it is.  One factor there is that it was written by the legendary Sherman Brothers (names that will come up again on this list) for the original attraction in 1983.  Even if the ride doesn't reflect the spirit of the song as much anymore, it's still a fun, catchy tale of letting your imagination take over.  Like many of these songs, once you get it in your head, you can't get it out.

The newest song on this list, Nothing Can Stop Us Now is another ear worm that perfectly fits in with this zany two-and-a-half-dimension ride through Mickey and Minnie's cartoon world.  It would probably be higher if the actual song were longer - the version here is only about a minute in length.  But it plays in various forms throughout the ride, including the finale when fireworks shoot off overhead.

This is a fun ride regardless, but it had a tough task to fill in for the Great Movie Ride.  This is one of our favorites at Hollywood Studios and while we often laugh when we reminisce about the ride itself, if I mention the name, someone in our family will start singing the song.  That's how much influence it has to the experience.

Another classic from the Sherman Brothers.  This one was written way back in 1963, and used in the original Disneyland version of the attraction.  Somehow, this still hold up today.  I could have probably just said that the entire soundtrack of this show (along with the Country Bear Jamboree) should have been on this list, but that wouldn't be playing very fair.

Instead, this is the introductory song to this attraction, and it does the job of setting the table for what you're going to see and hear in just a couple of short minutes.  That's why it's included here, as it stands on its own even without all the other bells and whistles (or feathers?) that follow.  Since the name of the attraction is included in the song, it's hard not to sing it as you're on your way over there or waiting in the queue.

What makes this one unique in Disney lore is that the attraction is a theater in the round and rotates as you move through history. The song is used as a transition from scene to scene, and works no matter what era you're in at the time.  It represents a hope and positivity that tomorrow will be even better than today, a theme that fits not just the attraction, but Walt's mindset in general. 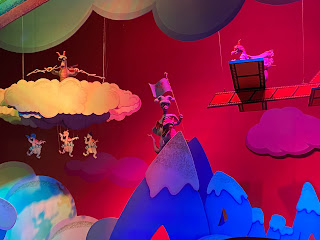 4. Soarin' Around the World - Epcot

I don't think the soundtrack to this ride has an official name, so I left that out.  This is also the only instrumental on this list, so that speaks to how iconic it is on its own.  Soarin' is one of my absolute favorite rides and that might color my opinion on this one slightly.  But this is a majestic piece that fits what you're seeing on screen perfectly.

My level of anticipation for this ride to start is among this highest at Disney.  When you get lifted off the ground and see the clouds in front of you, that moment where the clouds part and the music hits that first triumphant note is one of the best experiences I have every trip. The music truly "soars" as you experience the ride, and it wouldn't feel the same without it.

3. Pirates of the Caribbean - Magic Kingdom (Yo Ho, a Pirate's Life For Me)

One of the more ubiquitous songs on this list, pretty much everyone has heard it, even if they've never been to Disney.  Written by George Bruns with lyrics from Disney legend X. Atencio, is there a more perfectly matched attraction and song?  Perhaps "it's a small world" (not included here, but now included in your head) but it's close.

If listened to on its own, the loop can get repetitive.  But on the attraction itself, you probably aren't thinking about that as you slowly float your way through one incredible animatronic scene to the next.  It really captures the spirit of the ride - a little danger, and a lot of fun.  The updated version of the attraction even has Captain Jack Sparrow singing along at the very end.

Another Disney classic ride, another classic song that is inexorably intertwined with it.  It was composed by Buddy Baker and once again has lyrics by X. Atencio.  In the long journey from idea to completion, the Haunted Mansion underwent many changes.  The final version of the ride starts off spooky and scary and then turns into a somewhat comedic romp.

That's where Grim Grinning Ghosts comes in - as the soundtrack to the second part of the ride, as the spirits begin to materialize for your entertainment.  The fact that they are both grim and grinning is what makes the song fit the ride like a glove.  It isn't easy to marry these two things in an attraction, let alone in a song, but it works perfectly here.

This was what had me thinking of writing this post in the first place and as I hinted at above, Splash Mountain is closing in January 2023 to make way for Tiana's Bayou Adventure.  While I understand the change, Splash Mountain was only partially related to the controversial Song of the South.  Some of that is in the music here.

I still contend that this is the most iconic and sprawling piece of music on any (current) Disney attraction.  The Splash Mountain Medley (its official name on the Walt Disney World Soundtrack) consists of three distinct phases - "How Do You Do?", "Ev'rybody's Got a Laughing Place" and the award winning "Zip-a-Dee-Doo-Dah."

These songs tell the story of the attraction so fully, you don't even really need to ride it to understand what's happening.  But if and when you do, you are immersed in the details of the ride as the music underscores the increasing dread and ultimate "splash" of the ride's namesake.  As soon as I hear the first notes of the banjo when I'm listening to music, I'm hooked.  It's a shame that this ride and music have been caught up in the controversy of the original movie, but I think it stands on its own as a masterpiece.  It will be missed.

Speaking of missed, have I missed anything?  If there's a song you love that I neglected here, drop me a line.  It's possible I just didn't think of it!  This is a good snapshot of current time and it's fun to look back on these type of lists as the years go by and things change.  I'm sure there will be plenty of new and iconic songs developed for future attractions, as that is part of Disney's DNA.