It seems like we've been waiting for Tron Lightcycle Run to open at Magic Kingdom since the original movie was released, or at least since Tron: Legacy came out in 2010.  And while it hasn't been THAT long, it has still been a long time coming.  But wait no longer (or at least not that much longer) as Disney announced that Tron will open on April 4.

I haven't written too much about Tron so far, mostly because it always seemed like more of a concept rather than an actual ride.  But since we have a real concrete date now, I wanted to talk about what the ride is, why it took so long to open and what it means for the rest of Magic Kingdom.
Tron Lightcycle Run (stylized as TRON Lightcycle / Run by Disney but I can't possibly write that every time) is actually a direct clone of Tron Lightcycle Power Run that debuted in Shanghai Disneyland in 2016, when that park first opened.  It is a launch style roller coaster, with the vehicles looking like the vehicles (lightcycles) in the movies and the track being an enclosed track with neon effects.  Very 80's, which is the point.
I don't know if Tron is a bigger deal in China or if the idea of creating something that matches the neo-futuristic vibe was just a fun challenge for Disney but this is not one of their biggest franchises. Either way, this should fit nicely in Tomorrowland (right next to Space Mountain) and look impressive at night when the canopy is lit.  The ride vehicle is reminiscent of Hagrid's Motorbike Adventure at Universal and the banshee that you ride in Avatar Flight of Passage at Animal Kingdom.
I honestly don't remember when Tron was officially announced as coming to Magic Kingdom, but the expectation was that it would be ready for the 50th Anniversary, which encompassed the period of October 1, 2021 through March 31, 2023.  Obviously it's missing that mark (though just barely, if you consider the end of this period to be their goal).  The ride has basically been ready for months, but I think the decision was made to hold off and open it after the 50th celebration was over on purpose.  The most recent timeframe given was "spring 2023" until now.
The pandemic can be blamed for some of the delay but it's hard to believe that it took so long to bring a clone of an already existing ride to their flagship park.  The ripple effect was the closing of the Walt Disney World Railroad to work the track through the Tron attraction building.  I touch on this briefly here but suffice to say, this dragged on longer than what you might think would be a reasonable time.  Sadly, this is the real Tron "legacy."
I consider there to be two windows of time where a new attraction should debut.  One would be in the off season, where some early kinks can be worked out without the ride being overwhelmed, and the very debut of a new ride should attract more guests to an otherwise slow time.  The other would be the exact opposite - if you open during a particularly busy season, you accomplish the all important goal of drawing guests to your new ride and away from everything else in hopes of a more even crowd distribution.
What's interesting about the April 4 date is that it's sort of like splitting the baby here - it won't debut in time for the heart of Spring Break season (which is usually mid-March, depending on how the calendar falls) but it will be ready before the Easter break (Good Friday is April 7 this year).  You can expect some previews and soft openings as well.  I'm just not sure this is the right date to open, but I'm not going to complain anymore about the delay.
In fact, this is a good time to put this attraction in context.  This will be a big deal, maybe not on the level of Guardians of the Galaxy Cosmic Rewind at Epcot but pretty close.  There isn't any indication yet, but if recent precedent means anything, Tron should debut as a virtual queue and Individual Lightning Lane only (no standby).  I'm actually surprised Guardians still has the virtual queue in use but it will almost surely be gone by the time Tron debuts. 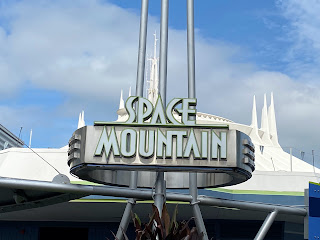 What then remains to be seen is whether the current ILL attraction - Seven Dwarfs Mine Train - gets bumped into the regular Genie+ tier or whether there will be two ILL attractions at Magic Kingdom.  The idea of two ILL's at all four parks (which was the original plan) always seemed like overkill, but if any park can sustain it, it would be Magic Kingdom due to its large attraction selection.  However, I hope my first thought is correct and that SDMT goes to Genie+ with the rest of the attraction lineup.  It would automatically jump to the top of the priority list for G+ but the shiny new toy in Tron should draw people away from SDMT, knocking it out of the longest wait time (once Tron has a standby wait) for a while.
There have been a lot of new attractions that debuted at Disney World in recent years, including some whole new lands.  There's usually one park that is in the process of being worked on and/or needs some attention (Epcot is currently the former and Animal Kingdom is becoming the latter).  But Magic Kingdom is often the outlier here, as there often aren't that many "major" changes to that park.  It's still Disney's most popular park, though, because for most casual fans, Disney World equals Magic Kingdom.  There are more attractions in general there and more older, classic rides.  You could say that Magic Kingdom doesn't "need" a lot of new attractions regularly.
And this is true, but it's also true that there hasn't really been much attention paid to the flagship park for a while.  New Fantasyland (which included Seven Dwarfs Mine Train) was completed in 2014, almost nine years ago now.  Seven Dwarfs is continually the top draw (or close to it) all this time later, due to a lack of competition.  The next busiest attractions are all older legacy rides - Peter Pan's Flight, Space Mountain, Jungle Cruise, etc.
Tron will change all of this, and it will be fascinating to me to see how it will ultimately affect crowds, wait times, etc.  The show building is a natural eye catcher that will draw people in (a "wienie" to use the words of Walt Disney himself) and be a focal point of Tomorrowland for years to come.  It's been a long time coming but the future is finally here.
at January 11, 2023