Be Our Guest Review 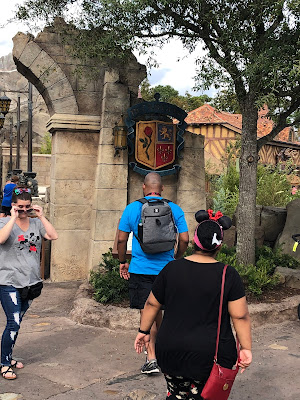 Be Our Guest is a table service restaurant in the Fantasyland section of Magic Kingdom.  Here we’re going to discuss our recent experience there, including the atmosphere and the food selections, and talk about whether it’s worth its price and reputation.

Be Our Guest opened in December 2012 as part of the New Fantasyland expansion of Magic Kingdom. The restaurant actually opened before much of the rest of that expansion was complete. As the name might imply, it is designed to look like Beast’s castle from Disney’s classic Beauty & The Beast movie.  The castle exterior is a product of “forced perspective”, which means that it appears farther away and taller than it actually is (Disney often uses this technique, including at Cinderella Castle).

Due to its location at the north end of Fantasyland, the check in station is on one end of a bridge.  You have to show the cast members your reservation (by scanning your Magic Band or Magic Mobile, etc) before you can cross and get to the doors of the restaurant.  This means that if you don’t have a reservation, you can’t actually look around inside.  This leads to an air of exclusivity, which is a plus in the case of something that is supposed to be fancy and/or mysterious.

There are three distinct rooms in which you can be seated – there’s the Grand Ballroom, which is the first room you’ll come to, with a tall domed ceiling.  It really is a great first impression once you’re through the doors.  To the left of that room is the West Wing, designed to look like the Beast’s study, complete with torn painting and the enchanted rose.  We’ve never dined in this room, but it has a darker ambience and mood than the others; whether that’s a plus or a minus is up to you.  And finally, there is the Castle Gallery, designed to look like Belle’s library, with a feature mid-room statue of Belle and the Beast dancing. 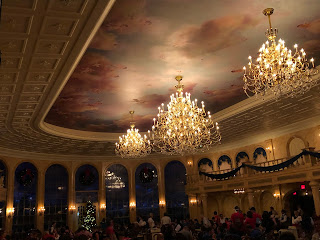 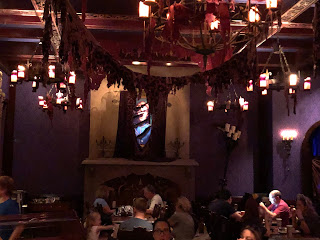 We’ve actually eaten at Be Our Guest twice, though that first time will be irrelevant here – until the closure, Be Our Guest served a quick service lunch and a table service dinner.  It has since switched to a prix fixe menu for both lunch and dinner.  Perhaps they weren’t maximizing their profit on lunch previously?  I consider this a shame, as it was a good way to get to see a unique restaurant without having to break the bank.  They also had a preorder feature where you could make your lunch selections up to 30 days in advance and have it ready when you checked in.  This was essentially mobile order for a sit down location, and was the only one of its kind at the time.  For that meal, we ate in the Grand Ballroom (you can ask the cast member at the check in desk for a particular room, but given the popularity of this restaurant, you’re not guaranteed anything.  We took what they gave us both times, for what it’s worth).

With the new prix fixe menu, the price tag might give you pause – the current price is $62 per adult and $37 per child (ages 3-9).  This includes a non-alcoholic beverage, appetizer, entrée and dessert.  This price is actually the same as the current pricing for Cinderella’s Royal Table.  That may change, as right now, character dining is not happening at CRT.  So effectively, it costs you the same to eat in either “castle” right now.  Side note – we actually attempted to get reservations for Cinderella’s but they didn’t have anything on the dates we wanted, so Be Our Guest was our backup.  They are both relatively difficult reservations to secure, though Be Our Guest does seem to be slightly easier.

We were seated in the Castle Gallery on our most recent trip.   For my appetizer, I chose the French onion soup, with Toasted Crouton, Gruyère, and Provolone.  This is not normally my “go to” soup, but I thought it was creamy and tasty.  My wife ordered the assorted meats and artisanal cheese selection, which included Chicken Rillettes, Shaved Serrano Ham, Chorizo Sausage, Pleasant Ridge Cheddar, Truffle Tremor, and Stilton Blue with Seasonal Garnishes.  I picked off of her plate as well, but mostly this was her thing and she thought it was delicious. The other options are a mixed field green salad, Maine Lobster bisque and for the 50th Anniversary celebration, the Captain Nemo Octopus. 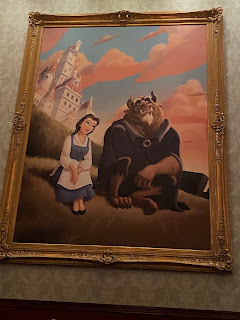 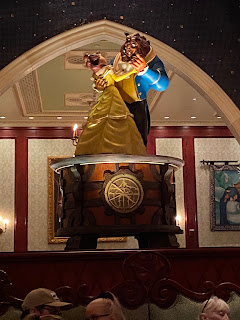 For our entrees, we both got the center-cut filet mignon, with Robuchon Yukon Potatoes, Seasonal Vegetables, and Cipollini-Garlic Purée with a Red Wine Purée.  At the time, I didn’t consider that I would be writing a restaurant review, or I might have made sure we ordered different entrees.  However, my personal opinion is that if you’re ordering off a prix fixe menu, you should try to maximize your dollars.  The filet was clearly the best value for your money here.  Other options included herb-salted pork tenderloin, Poulet Rouge chicken, Vadouvan spiced vegetables, and pan-seared sea scallops.

I’m certainly not discouraging you from ordering these, but the filet seemed like the correct choice.  Was it worth it? For us, this was a resounding yes.  It was cooked wonderfully and seasoned perfectly, plus it was soft and tender. I haven’t had the opportunity (yet!) to sample many steaks on Disney property, but this was certainly the best I’ve had so far.  Our children both had the similar grilled beef tenderloin on the kids’ menu and both really enjoyed it.  I sampled a piece of my son’s and it seemed like the same meat, just with fewer spices for the often less adventurous children.

For dessert, there is currently a 50th Anniversary exclusive option called the Ned Land sea cake (we weren’t there during the start of the 50th, so this wasn’t on the menu at the time).  There is also a plant based option, the vanilla cake with lemon curd.  But for everyone else, you are given the dessert trio – a lemon jam macaron, dark chocolate truffle and white chocolate “Chip” cup, with the iconic “grey stuff.”  The kids’ menu has the trio as well, with the Chip cup coming with colored icing that you can use to paint.  For my aspiring artist daughter, this was the highlight of her night, and a great touch for a restaurant that might seem too fancy for children otherwise. 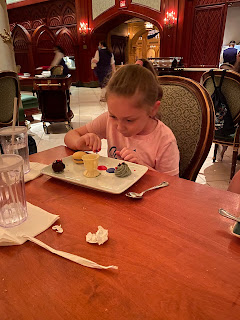 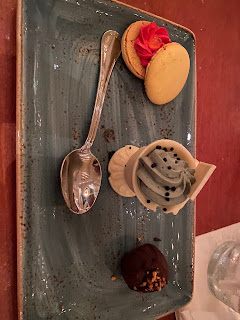 The dessert trio was a great way to cap the night.  The Chip cup was nice, though I felt a little bad “chipping” away at our friend.  The truffle is decadent, and almost a little too heavy after a big meal. The macaron was the standout here, being light, sweet and tart.  All three worked well together and I can see why they are served this way.

As for the atmosphere, that’s really what you’re paying for here, and I found it to be wonderfully immersive.  Each room feels different and they’re all interesting in their own way.  The decorative touches make it seem like you’re eating in a fancy castle.  And while this isn’t a character meal per se, the Beast does make regular appearances to wave to his adoring guests (I think he came in three times during the course of our meal, so you won’t miss him). 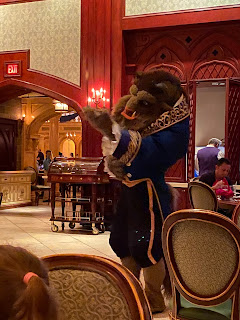 As I said, the price tag is a bit hefty for something that isn’t a character meal, though with the new menu, it is considered signature dining by Disney standards.  Everyone will have to make that value judgment for themselves, but when we came back from our last trip and talked about the meals we had, both my wife and I agreed that Be Our Guest was at the top of the list for food quality alone.  Add in the castle setting and ambience and this one is a winner for me.