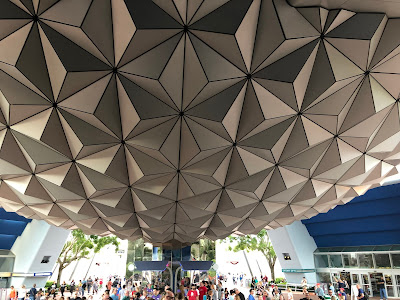 As I sit down to write this, the date is November 24.  That date might not have particular meaning to most people, but for me, it is a reminder of the day we left for our first trip to Walt Disney World with our whole family, three years ago.  As I said in the welcome post on this blog, this was the start of my true Disney obsession, which has seeped into the rest of the family (if I say the date “November 24” to my eleven year old, he’ll say, “That’s when we went to Disney!”)

Since I now have this outlet to write my Disney thoughts, I figured this was a good time to go back and look at that first day – how it came to be, what our thoughts were as we arrived and how it made me immediately want to go back (spoiler alert?)  I’m not going to go blow by blow over every detail of that trip, but a lot of that first day in particular is burned into my memory and has led to numerous family traditions. If you’re planning your first trip, take a look at how one family got there. And if you’ve been a hundred times, think back to that first time (or first time as an adult, or with your kids, or whatever you prefer).

To flesh out some background from my welcome post, my wife and I always loved Disney.  We didn’t go THAT often as a child (I say, knowing this is a first world problem) – I went once when I was eight, and she went twice, I believe.  I also went once to Disneyland, though even with me being older, I have less recollection of that trip.  I knew my wife in high school (a long story for another day) and after we graduated, we took a trip to WDW together.  Years later, after we got engaged but before we got married, we took our first real “adults” trip there (I don’t consider us as fresh faced 18 year olds to be “adults” in the prior trip).  It’s hard for me to distinguish these trips from each other, but I know that every time we went, we had a great time.  Disney was always something in the back of mind that I knew I wanted to do again.

And then … well, we didn’t go for many years.  Life kind of got in the way.  We got married and went on a honeymoon, we took exotic, once in a lifetime trips (an Alaskan cruise, a trip to Egypt), I went back to school and by the time I was graduating, she was pregnant with our first kid.  If I had felt as strongly about Disney then as I do now, I probably would have found the time and/or money to go, and maybe our son would have been introduced to this wonderful world at a young age.  But we didn’t want to go when he was very little, and then we had my daughter when my son was three.  So we waited until she was old enough to understand and remember, figuring this might possibly be our only trip ever (I think you can figure out how this turned out).

We had been saving money for years, but not in earnest.  There was always that thought – one day, we’ll take the kids to Disney.  Around summer of 2017, when my daughter had just turned four, we started to really think about planning the trip for the next year.  As soon as I opened that veritable Pandora’s Box called the internet and started my research, it all came rushing back to me.  I was determined to do this trip “the right way”, though in retrospect, there really isn’t one way to do Disney. But we had never stayed on property on our earlier trips, and I wanted that to be part of this trip.  We were generally very picture adverse, especially before camera phones, but I planned to take a million pictures and purchased PhotoPass to remember every detail.  In other words, we were all in.

I’ll save you all the details of my meticulous planning (actually, a lot of those details are sprinkled throughout these posts, so I guess I’m not really “saving” anything) but will turn my attention instead to how things played out.  We had a great plan to tell the kids a few months before the trip, getting them excited and having them be a part of the planning process from then on.  But since our lives aren’t a movie, the big reveal was a little more muted than we had wanted (after they solved a treasure hunt that spelled out when and where we were going, my daughter’s response was “today?” and my son’s response was “why?”  Not exactly what we were looking for!)

My wife and I talked about it, and we figured their tepid reactions were because they were young and had never been to Walt Disney World before (they knew this was something they wanted to do, but in a largely amorphous way).  Still, we pressed on and as it got closer, they did indeed feel the anticipation every time we passed a milestone (magic bands, luggage tags, etc).

On the morning of November 24, we were driven to the airport and our journey began.  The kids had not only never been to WDW but they had never been on an airplane before, period.  So that was something exciting right away. We touched down in Orlando and got on the Magical Express line.  Pretty soon, we arrived at our resort, Coronado Springs.  I could tell it was going to be a hit with the kids when my son said it was “the best hotel I’ve ever seen.”  We checked in and planned to immediately go to the parks, in this case Epcot, since it was open the latest and we only had probably six or seven hours left.  After waking up early and traveling, I didn’t know how my kids would handle a late night right away, but we figured this was a good way to ease them into the trip.

I had had my reservations about how I would feel returning to WDW after so many years away.  I had grown older and crankier, and my memories could have been fueled by nostalgia alone.  I generally feel like “you can’t go home again”, and that many of the things I loved in my younger day didn’t live up to my expectations when seen again from an adult perspective.  Given the amount of money spent, crowds and heat – all things that don’t normally sit well with me – I was prepared to be let down. 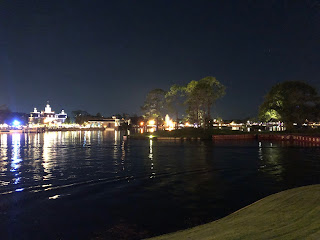 I’m sure you can guess how this went, but I shouldn’t have worried.  As soon as our bus approached Epcot and Spaceship Earth towered above us, my fears were alleviated.  The magic was back; or I guess the magic never left, but *I* was back, and it was like I had never left.  The chills went down my spine and a smile spread across my face – truly, we were home, again.

Being that I hadn’t been to the parks in so long, it was hard to remember all the details of where to go and what to do.  Mostly I had forgotten just how BIG the parks were and how long it would take to get from one end to the other.  We walked into Epcot and immediately did Spaceship Earth, which is something I advise against actually, since that’s what most people do.  But it was hard to keep my kids away from that giant dome.  They were immediately in love – as anyone who has been to WDW knows, there’s nowhere else like it in the world.

We only had time to hit a few attractions that first day (we did a whole day at Epcot the next day, so we didn’t miss anything) but they included one of my all time favorites in Soarin’.  My son doesn’t love that one, but we were all about trying new things and learning what we liked best.  We mostly stayed in Future World that first day, hitting up a couple of other rides there.

When it was time for dinner, we had a reservation at Teppan Edo in the Japan pavilion.  When I mentioned earlier how looking at maps online doesn’t do justice to the size of these parks, this was largely what I was talking about.  I knew where Teppan Edo was, generally, but it seemed so much further away when we started walking! Plus it was getting dark at that point.  I was worried we were going to be late and they’d give our table away.

Thankfully, we made it and had a wonderful time.  My then five year old daughter commented to the server in the kimono, “I love your dress!”  We were all feeling the natural high of being at Walt Disney World.  As I said, I won’t bore you with a step by step story of that trip, but a lot of what we did on this first day have become family traditions – Epcot is always our park on arrival day and eating at Teppan Edo has become standard (though there are so many good Epcot restaurants that my kids might petition to change this for our next trip).

As I said, I had been worried about not feeling the same way about Walt Disney World but I shouldn’t have spent any time worrying about that.  It was more incredible than ever and led to my daily obsession over Disney minutiae from that point on.  Though my wife and I had been big fans for years, this trip really turned the tide for us, now that our whole family had this experience together.  Happy anniversary to us.