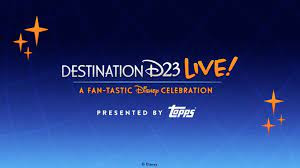 D23 is the official fan club of Disney, and Destination D23 is the fan club live event taking place this year (there are other, "bigger" events on alternating years).  This year's event is taking place at the Contemporary Resort from 11/19-11/21/21.  The news and announcements run the gamut on all things Disney; for the purposes of this website, we're going to be focusing only on the things announced related to Disney Parks, Experiences and Products (DPEP), and even more specifically at things announced for Walt Disney World.

The main event, for our purposes, is Connections: A Look at the Future of Disney Parks, Experiences and Products, in which DPEP chairman Josh D'Amaro spoke and talked about new and upcoming projects related to these fields.  There was alternately a lot said and little announced, if that makes sense.  If you're interested in news related to Disneyland Paris, Tokyo DisneySea, the Disney Wish cruise ship or Disneyland Resort, this can all be found here. I'm going to focus on the announcements pertaining to Walt Disney World.

As part of the historic transformation of EPCOT, teams have been reimagining the front of the park and the entry experience for guests. In the future, there will be a new location near Spaceship Earth called Dreamers Point with a spectacular view of the park and a new statue of Walt Disney! Disney Imagineers are now working to bring this new statue to life.

This was announced previously as part of the new Epcot transformation.  A lot of that stuff was either shelved or cut back, but it sounds like this is still a go.  I'm a sucker for statues of Walt, so this gets a thumbs up from me.

Josh also shared the name of a new quick-service restaurant, Connections Café and Eatery, debuting in the World Celebration neighborhood of EPCOT as part of the park’s ongoing transformation.

It sounds like this is taking the place of Electric Umbrella.  Since there were no other details shared about what the restaurant will be like, there really isn't much to say.

BREAKING: Guardians of the Galaxy: Cosmic Rewind will open to guests in summer 2022 in EPCOT as part of the Walt Disney World Resort 50th Anniversary celebration!

Debuting in the newly renamed World Discovery neighborhood of EPCOT, this family-thrill coaster attraction will match the scale and adventure of the “Guardians of the Galaxy” films, inviting guests on an intergalactic chase through time and space. It will feature the first reverse launch on a Disney coaster and will be one of the longest fully enclosed coasters in the world.

This might the closest things to a "big" announcement made today.  We already knew Cosmic Rewind was a go (much of the show building and ride structure are complete) but this is the first time a date was given to it beyond "2022."  While this doesn't exactly narrow it down, it does give it a general target.  If you're taking a trip in July or August, for example, there's a good chance this will be ready to go.

Star Wars: Galactic Starcruiser at Walt Disney World Resort will take you to a galaxy far, far away for an immersive vacation experience that goes beyond anything Disney has ever created before, inviting you to be the hero of your own Star Wars story beginning March 1, 2022.

This had also been announced, and reservations had been accepted for a couple of weeks now.  There is a link on the Disney Parks Blog showing Josh doing some lightsaber training as part of this experience. It was also noted that Make-A-Wish families would be among the first to experience the Galactic Starcruiser, and it's hard to argue with that.  Disney always does a great job with Make-A-Wish, and this is no exception.

Disney Imagineers are working on bringing characters – of all sizes – to life in authentic ways at Disney Parks and right now they’re developing a full-body exoskeleton system they’ve nicknamed “Project EXO.”  It’s still in early concept development and Josh and team shared a glimpse at what the future of Disney Parks may look like!

This is vague but intriguing.  Disney has always pushed the boundaries of technology and this would fit right into that category.  Anything to make the parks and characters within them feel more alive, I'm all for.  I'll be watching this one with interest.

Edit: they saved the "live entertainment" announcements for another panel, which makes more sense than D'Amaro firing off a bunch of things earlier this morning.  These updates can be found here and include:

A couple months ago, we revealed that next year we’ll be bringing a reimagined version of “Finding Nemo: The Musical” to Theater in the Wild at Disney’s Animal Kingdom Theme Park. Today, we’re thrilled to share some additional details with you about this newly updated show, which we’re calling “Finding Nemo: The Big Blue… and Beyond!”

Animal Kingdom is starved for attractions right now, and this is a good people eater.  Glad to have this one back.

As Josh D’Amaro, Chairman, Disney Parks, Experiences and Products, announced earlier today, “Fantasmic!” will also be returning to Disney’s Hollywood Studios in 2022. When this incredible spectacular reopens next year, it will incorporate an all-new sequence featuring live performers, stunts, special effects and more!

Unfortunately, no time frame was given besides "2022" so that could mean anything.  But there have been so many rumors, both good and bad, regarding this show that I'm happy to hear that it is officially coming back and not being shut down or replaced.

At Magic Kingdom Park, we’re bringing live entertainment back to the Cinderella Castle Forecourt Stage early next year, with a show newly enhanced for the 50th Anniversary celebration. “Mickey’s Magical Friendship Faire” will incorporate favorite scenes from the previous version of the show – with sequences inspired by “Frozen,” “Tangled,” and “The Princess and the Frog” – plus a new opening and a new finale with Mickey Mouse and all his friends in their sparkling, EARidescent fashions. The show will also include an all-new, original song entitled “Where the Magic Feels Like Home.” “Mickey’s Magical Friendship Faire” will be a wonderful addition to our live entertainment lineup for the 50th Anniversary celebration.

More entertainment is always a good thing - the Castle stage seems much more alive when things are happening periodically throughout the day.  I have no complaints here.

Mickey’s Celebration Cavalcade debuted Oct. 1 as part of the 50th anniversary, and later this winter, we’ll introduce a new cavalcade, the Disney Adventure Friends Cavalcade, with an exciting lineup of characters all embarking on a great journey through the park. The Disney Adventure Friends Cavalcade will feature the most characters of any cavalcade to date, including Nick and Judy from “Zootopia,” Baloo and King Louie from “The Jungle Book,” José Carioca and Panchito from “The Three Caballeros,” Miguel from “Coco,” plus Merida, Moana, The Incredibles, and so many more!

Cavalcades have been a re-opening staple and I'm glad to hear they're not going away.  Lots of cool rare characters in this one, and I'm always super excited to see Nick and Judy.  My only issue with cavalcades was that they took the place of regular parades.  Well ...

And in early 2022, these cavalcades will be joined by the return of the Disney “Festival of Fantasy” Parade. This vibrant and joyous celebration of Fantasyland brings to the streets of Magic Kingdom Park dozens of beloved Disney characters and stories, from the Disney Princess Garden to a carnival of color presided over by none other than Mickey Mouse and Minnie Mouse.

This had been rumored since the Christmas parade this year, but this is the official announcement.  Early 2022 indicates that it will be back after the Christmas season, and give those cast members parts beyond the holidays.  Good news all around. The parade is a good one, and it draws people away from rides in the park.  That's a win/win.