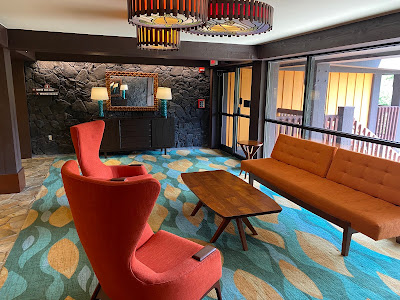 On a recent trip to Walt Disney World, we were fortunate enough to stay at one of the most popular and impressive Disney resorts, Disney’s Polynesian Village & Bungalows.  This had been one of my bucket list resorts for years, and I was so happy we were able to make it happen.  This was in large part due to renting DVC points, which I talked about in another post recently. In this post, we’re going to talk about the room options, dining and general atmosphere, and try to come to the conclusion as to whether it’s worth the high price that Disney charges for it.

For starters, the reason this resort is so coveted (and expensive) is because it is one of the three resorts directly around the Magic Kingdom, sitting on the Seven Seas Lagoon.  This also makes it one of only three resorts to be on the monorail loop, offering a fun and convenient way to get to Magic Kingdom (and Epcot, via the Transportation & Ticket Center).  The Polynesian celebrates “the spirit of the South Pacific” with “tropical palms, lush vegetation, and so much more” according to Disney

The layout of the resort consists of eleven longhouses, separate buildings containing the hotel rooms.  These longhouses are named for islands in the South Pacific, with each building matching (relatively) their position in the real world.  When the Disney Vacation Club was added to this property, three of the longhouses (Tokelau, Moorea and Pago Pago) became DVC buildings, as well as the Bora Bora Bungalows that sit overhanging Seven Seas Lagoon with a direct view of Magic Kingdom.  Those bungalows are impressive looking and come with an astronomical price tag; in fact, they are some of the most expensive rooms on Disney property (though they sleep eight, if that helps).

I don’t know if there is a longhouse that is “better” than the others, as that largely depends on what you’re looking for.  The property is large but not overly so, and it’s easy to walk from one side to the other.  This is in contrast to some of the value or moderate resorts, where a preferred room (closer to the main lobby) is a good option.  Since we were using DVC points, we were in one of the buildings farthest to the east, specifically Moorea (by our request).  These buildings are the furthest from the lobby and most other amenities, but it never felt overwhelming to walk there.  Plus, as a bonus (?), the monorail station was still under construction when we stayed there (it has since reopened) but we were close enough to walk to the TTC to pick up the monorail there.  In fact, I would encourage any guest staying at the Polynesian to do this if you’re just going to the parks, as it can be a time saver, but the DVC rooms definitely have a walking advantage there.

As for the rest of the property, the big eye-catching feature building at the Polynesian is the Great Ceremonial House.  This houses the lobby as well as the dining options (which we’ll get to later), two gift shops and the monorail station (the bus stop is next to the Rarotonga building, down a path near Lilo’s Playhouse, which wasn’t open when we visited).  The lobby is grand and gorgeous, and all of the shops and restaurants seem like natural offshoots of the main area.  I could spend a day just sitting around in that lobby or walking aimlessly around Moana Mercantile (though I don’t, because I’m likely to spend my time and money at the parks).

There are also two outdoor pools on property. One is the quiet oasis pool, more on the east side of the property. The other is the more kid friendly lava pool, which sits directly north of the Great Ceremonial House.  There is also the Kiki Tiki Splash pool within those gates, for the little kids.  We spent more time at the lava pool, but both are very nice and certainly worth your time after a long day walking around the parks.

Possibly the best “amenity” at the Polynesian is the direct view of Cinderella Castle at Magic Kingdom.  If you walk out the back of the Great Ceremonial House, you can see it there, albeit small in the background.  And if you continue north to the beach area, you can get a view of the nighttime spectacular at that park (currently Enchantment).  It’s not the same as being in the park, as you’ll miss most of the projections, but you can see the fireworks over the castle and hear the music that they pump in.  It also makes for a much easier trip back to your room afterwards.

As for the rooms themselves, there are a variety of options.  In addition to the bungalows discussed earlier, there are some suites, from one bedroom all the way up to the King Kamehameha Suite.  There are also club level rooms, which gives you access to the club level lounge, where you can get food throughout the day, among other things.  I have no direct knowledge of these room types, so for our purposes, we’re going to talk about more traditional studio rooms.

There are various options for studio rooms – standard view, pool view, lagoon view, or theme park view.  These get more expensive as they go, so you have to think about whether the view from your room is worth the extra money.  You can get a “theme park view” from the beach, so you don’t necessarily need one from your room (though that is pretty magical). 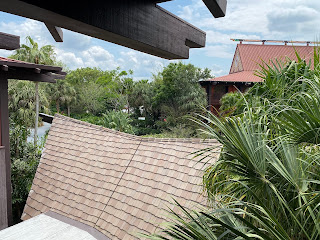 Since we stayed in a DVC room, we can talk about the differences between that and a standard room.  For one thing, it has a kitchenette.  Also, all of the DVC studio villas have balconies (or patios, if you’re on the first floor), which is important to consider because not all regular hotel rooms there have them.  I found the balcony to be a great feature, as we opened it up in the morning to immerse ourselves in all the greenery around our building.

The studio villas are 465 square feet, which makes them the largest DVC studios on property.  Being a DVC property, as discussed in that thread, there is one regular queen bed and one sofa bed.  We found the sofa bed to be of fine quality, so I wouldn’t hesitate to book one of these rooms because of this.  And much like all the Polynesian standard studios, there is a pull down daybed on the wall near the TV, so it sleeps up to five.  Our kids loved the daybed (inexplicably?) so we found we had plenty of room to spread out while we were there.

These rooms also have two bathroom spaces – one with a full tub and toilet, and the other with a fancier rain shower.  We mostly showered in that second one, but the shower curtain on the full tub was a good place to hang towels and bathing suits without getting in the way.  As I said, these rooms have the most square footage, but a lot is taken up by the double bathrooms.  Whether that’s a plus or a minus is debatable.

Our room was great overall, and like all deluxe resorts on property, the rooms are off of interior hallways as opposed to the entrance from outside (my wife has a pet peeve about this, so these rooms made her happy).  You need to scan your room key or magic band to get into your building.  And as I said, there is lush greenery everywhere; the smell of flowers as we approached Moorea was wonderful and really made us feel “home.”

Finally are the dining options at the Polynesian and there are plenty, which is fitting of a deluxe resort.  There are various bar and lounge type places around the pools and in the Great Ceremonial House.  I’ll specifically note Pineapple Lanai, which is the most convenient place to get a Dole Whip if you’re in the area.  Their quick service location on the first floor of the Great Ceremonial House (accessible from an outside entrance and through the lobby) is Captain Cook’s.  They serve standard American quick service fair as well as “Polynesian favorites” (my personal choice being the Aloha Pork Sandwich).  We spent plenty of time at Captain Cook’s for both breakfast and lunch – it’s not going to blow you away, but it is easy and convenient, and you can eat outside overlooking the pool and towards Magic Kingdom.

If you’re looking for something more substantial, there are two table service restaurants of note here. First is Kona Café, which serves the famous Tonga Toast for breakfast and entrees for lunch and dinner including Asian-marinated Airline Chicken, Kona-braised Short Rib and Mahi BLT.  Then there’s the ever popular ‘Ohana, a family style meal, which at dinner has a dinner skillet currently consisting of Wood-fire Grilled Teriyaki Beef*, Spicy Peel-n-Eat Shrimp, Grilled Chicken with Polynesian-inspired Chimichurri Sauce, 'Ohana Noodles, Roasted Broccolini. The noodles in particular are a fan favorite, as there was much social media outrage when they were not immediately available upon reopening after Covid.

The Polynesian can be an expensive splurge, but if you have the means, there is nowhere better to stay on property, in my opinion.  The convenience of getting to both Magic Kingdom and Epcot is hard to beat, and the atmosphere is downright magical.  Even if you can’t or don’t want to stay there, stop by for a meal and just walk around the relaxing grounds for a bit while taking a break from the parks.  A WDW trip isn’t complete without a stop at the Polynesian.