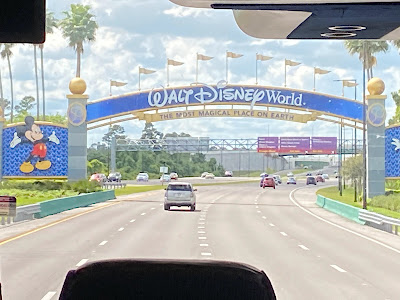 What a difference a year makes!  I don't think I have to tell you this, dear reader.  Most of the real life events in the last two years have had a major impact on everyone's lives, and how we navigated this time is something that we'll always remember.  Disney World is no different from the real world in this case.  They suspended operations around the time that everyone else did, March 2020.  They did begin their long process of reopening in July of that year.

Partially due to coincidence, we took two trips in the last two years, both around the same time of year (mid-April).  One was a "regular" week and one was the week after Easter, but other than that, all external elements were the same, including the weather.  So I thought it would be interesting to look at the differences between these two trips and to talk about the degree that things are now back to a pre-pandemic normal.

Let's start with this one.  Upon reopening, Disney introduced the park reservation system.  At the time, this was largely designed to limit the number of guests that were allowed into the parks each day.  I believe the number started around 25% of capacity and increased to around 35% at the time we were there.  This number was a moving target, and Disney was not overly transparent about what that number was and how and when it changed.  This is nothing new, as Disney doesn't officially release day by day attendance totals, even in normal times.

Let's assume we're working with that 35% capacity number.  Disney would stop allowing people to make reservations for a particular park once that number was reached.  This made for some tricky situations where people were being shut out of parks due to that number being reached quickly.  Now, the park reservation system is still in place and seems to be here for the foreseeable future, but it is mostly used to allow Disney to allocate cast members and other resources.  This is not a benefit for the end user, and many guests complain about it, but it's largely a formality if you're making your reservations months in advance.  Even most busy weeks don't run out of reservations until a couple of weeks before the dates in question.

What did a 35% capacity cap mean for crowds?  Mostly it meant that the parks felt emptier, by a large margin.  The lines for rides weren't always shorter (and looked longer because of social distancing) but the lower attendance was felt when walking around the parks.  I can't recall a time where there were any bottlenecks or logjams trying to get from place to place.  Stroller parking was nearly empty most times.  It felt surreal if you're used to normal crowds.  And now things are back to the good old days, as far as that goes.  You'll have to be careful navigating crowds and trying to get around double strollers.

By spring 2021, most rides had reopened.  There were some noticeable differences - some vehicles only boarded one party at a time, some had plexiglass or other plastic up separating the rows.  That second one in particular was a nuisance, as it made it harder to see on certain rides (Living With The Land comes to mind).  There were also instances of rides being altered - there was no preshow for Haunted Mansion, for example, where everyone crowds into one space. And the two preshows for Avatar Flight of Passage were reduced to one socially distanced one.

But rides only tell part of the story.  Basically anything that wasn't a ride hadn't reopened. This included most if not all shows (Indiana Jones Stunt Spectacular, Festival of the Lion King, etc) and all the nighttime spectaculars.  Some of that was a nod to pandemic protocols - it's easier to justify a constantly moving line than it is to cram a lot of people together in one space and have them sit or stand there for a set amount of time.  But it was more than that - fireworks shows in particular are expensive to run, and if there weren't enough guests in the parks to make each night's show worth running, Disney didn't want to allocate money there if they didn't have to.  It was easy to hide behind safety in this case.

By the time we went in April 2022, most of this is back to normal.  The plexiglass and such has been removed from rides, though not always from the queues themselves; I'm surprised these are still up, honestly, as walking through the Grand Fiesta Tour line was an odd experience even though the ride is normal again.  Preshows are back (we even saw the one for Mickey & Minnie's Runaway Railway for the first time - last year, you just walked through and into the ride vehicle area).  Many shows have returned though some are still altered (Festival of the Lion King seems to be bringing back their full normal show soon) and some are still closed, to reopen in a new form (Finding Nemo: The Musical).

We all remember these, right?  I mentioned social distancing above, which made certain lines spill out way beyond their normal limits, making the cast members have to get creative with how they had people line up.  I particularly remember the line for Frozen Ever After reaching all the way around Norway and into China.  I thought it would take forever to load but it actually moved really quickly and was certainly deceptive to the eye.

There were temperature checks set up as you entered each park, a sobering reminder of where we were at the time.  Though I didn't see it happen, I've heard stories about people getting turned away or at least having to sit in the shade for a few minutes before coming in because the surface thermometers were reading too hot.  Thankfully we had no issues here.

And of course, there were the masks.  At the time we visited last year, masks were required everywhere on property - indoors, outdoors, at hotels, on transportation, you name it.  I have a vivid memory of finding out about a week before we left that we were allowed to take our masks off for outdoor photos.  This might not seem like much now, but at the time it was a huge benefit, so our pictures would not be a constant reminder of having to wear masks.

Disney's mask policy changed a lot over the intervening months, loosening and then tightening again.  After the Omicron wave, Disney joined many businesses throughout the country in making their most recent (and hopefully final) changes to their policy.  As of February 2022, masks were not required for vaccinated guests indoors or outdoors (and since they don't check proof of vaccination, this essentially means "everyone").  Masks were still required on Disney transportation until the recent ruling by a federal judge overturning the nationwide mandate.  Disney dropped their requirement the next day.

These changes in totality were probably the biggest ones in making a trip feel like normal.  There were definitely people still wearing masks, but it wasn't everywhere and allowed everyone to do what they felt comfortable doing.  I can tell you that it is a much more pleasant experience to walk around in the Florida heat without having to wear one. 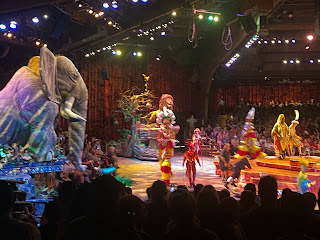 The biggest operational change during this time was the elimination of FastPass+ and the introduction of Genie+.  At the time of reopening, all rides were only available via standby (or virtual queue, in some rare cases).  FastPass+ wasn't necessary during this time, because of the lower number of guests at the parks each day.  And without a FP line, the standby line moved quicker and easier than it had any time I can remember.

Genie+ had been in the works for years, pre-dating the pandemic.  But it certainly gave Disney a convenient and somewhat easy excuse to transition to it last October.  If "paid FastPass" was always going to happen, the blow was softened a little when we went from not having any service to Genie+, as opposed to having to go directly from FastPass+ (free) to Genie+ (paid).

As crowd capacity was brought back to normal, it was clear that a system of some kind would be necessary to control the lines.  You can make an argument (and I have) that Genie+ is not the best option Disney could have come up with, but it is SOMETHING and was needed.  I miss the short standby lines, but it was probably untenable at current levels of attendance.

This is the most intangible item on the list, but one of the most important.  The most recent change to park operations has been the return of traditional meet and greets. Previously, characters were only around in cavalcades or appeared on balconies well out of reach of guests.  More recently, there were character appearances, which were mostly meet and greets but still distanced.  Unsurprisingly, these were not nearly as popular with guests.  And while cavalcades stuck around (a good choice, in my opinion), parades such as the Festival of Fantasy have now returned as well.

But atmosphere is so much more than that.  While Disney did their best to liven up the parks last year, they still felt empty and not just because of the lower number of guests.  Now most of the "streetmosphere" has returned, which is especially noticeable in Epcot's World Showcase, where you can watch a mariachi band or Japanese drummers.  I saw African street musicians, a dance party on Discovery Island and even someone playing a sitar in Animal Kingdom.

I can't begin to explain what these changes and returns mean to the FEEL of the parks.  Not to get too sentimental, but Disney is about much more than rides.  Nowhere else in the country (world?) will you get to see the types of performers you regularly see just walking around Disney parks.  There's always something to do that captures your attention.  These may not be the reasons that you come to the parks, but they are often the things you will remember most vividly.

It's pretty clear that the way things are operating in 2022 is objectively better than they have been in 2021.  They're still not all the way back either - there are still staffing shortages leading to less restaurant availability, among other things.  The Disney Dining Plan has not yet returned mostly due to that last factor.  Some shows are still not operating or are still modified.  But things are trending in the right direction.

Was there anything in 2021 that was BETTER than 2022?  That's a more subjective question, but I would say the relative quiet of the parks was a nice benefit.  The lower crowds also led to shorter waits for rides across the board.  We managed to ride Flight of Passage three times in one day in 2021, which would be extremely difficult to pull off today, especially if you were using only the standby line.  We did more rides last year, but that was largely due to the fact that rides were mostly our only option - there was nothing else to occupy your time (except shopping).  The net benefit of all of the above far outweighs the niceties from 2021.  While I'll always remember that trip fondly, it's nice to have a mostly normal Disney firing on all cylinders again.