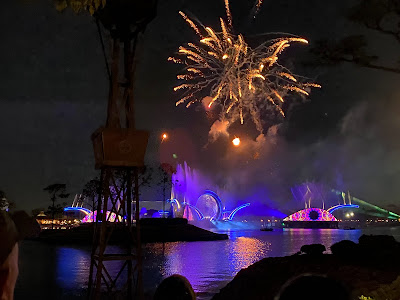 Way back when, almost seven months ago now, I wrote a post about Disney's new nighttime spectaculars that debuted for the 50th Anniversary Celebration.  Most of that post is spent waxing poetic about Magic Kingdom's most recent nighttime show, Happily Ever After, and whether then new nighttime shows (Enchantment in Magic Kingdom and Harmonious in Epcot) could live up to that legacy.

I realized I didn't talk a whole lot about those actual shows.  Partly this was because I wanted an excuse to talk about HEA, a spectacular in every sense of the word.  And partly this was also because I hadn't seen the new shows for myself in person.  Watching (and immediately reacting to) videos on YouTube is what the internet is about but it's certainly not the same as seeing them in person.  So I asked myself - did I do these new shows an injustice with an unfair comparison?  That's what I wanted to address here today.

We recently got to experience both of these shows in person for the first time, and in general, they are more impressive live and in person than on video.  This stands to reason, as most things are.  There was a lot of emotional baggage behind the decision to implement these new shows and now with some months of distance, I wanted to try and take some of that emotion out of it and judge them on their own merits.

Illuminations was replaced in October 2019 with Epcot Forever.  That show was always meant to be a temporary bridge until the structures for Harmonious were completed.  It ended up being even more temporary than expected, as the pandemic shut everything down in March 2020, though Epcot Forever did reopen in July 2021 and ran for a couple of months before Harmonious debuted.  I don't have much to say about Epcot Forever - I never got to see it live, and while it seemed perfectly adequate on video, it was never meant to be the big, game-changing event that Harmonious was (or that Illuminations was before it).

So this brings me back to Illuminations.  I'm sure a lot of my memories of this show are colored by nostalgia.  When we first took the kids, we watched Illuminations on our first night in the parks and it brought back all those great memories for me.  It was a true reflection of what Epcot was supposed to represent - the unity of all people, and the hope for a positive future.

Epcot itself has changed a lot since Illuminations was running.  And as I said, twenty years of the same show was more than most get, so as much as I miss it, I understand why a change was made.  Harmonious was meant to follow a similar through line in the way its story was told, as classic Disney songs are reinterpreted through multi-cultural voices to show again how we are all united. 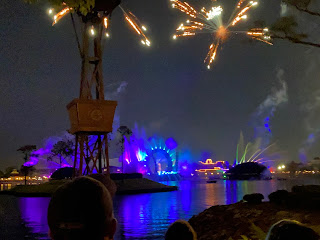 Is Harmonious any good?  After seeing it, my answer is yes.  Unlike Illuminations, there are objectively better spots to watch it from, but you can see the screens from almost anywhere. The projections and the fireworks are top notch and there are some true "wow" moments during the show.  There's almost nothing like standing in Epcot as the sun goes down and the torches around the lagoon are lit.

One of my initial issues with this show was that a lot of the "high points" were drawn from a similar well as the high points in Happily Ever After.  Disney has plenty of powerful songs - did Harmonious need to use Go The Distance, How Far I'll Go and Out There as punctuation marks in two different shows?  Ultimately, this is a moot point, as HEA is gone now as well, though we'll get back to this point later.

Still, Harmonious hits a lot of high points that aren't based on those songs - the Coco section (Remember Me and El Mundo Es Mi Familia) is a particular highlight, as is the close of the second "act" with The Princess and the Frog's Dig a Little Deeper.  I find the finale to be a little flat in comparison, but overall, this is a good show that is a worthy spiritual successor to Illuminations.  It's not "pure" Epcot like the former show, but nothing really is anymore, so I don't know if that's the basis to judge it on.

Now we'll turn our attention to Disney Enchantment, the new nighttime spectacular at Magic Kingdom.  Enchantment was meant to be a natural progression from Happily Ever After, as it would continue the technological advances made by that show, largely involving projections, and continue that down Main Street to make for more interesting viewing from different locations.

I've already made my feelings on Happily Ever After clear (I hope) and one of my biggest complaints about a new show here is that HEA only got to run for about four years, and that included lots of time where it wasn't running due to the pandemic.  Considering what was invested in that show, it seems like there was no need to replace it so soon, unless it was an abject failure, which I'm pretty sure it wasn't.  HEA's own predecessor, Wishes, ran for much longer and also had a rabid fanbase that considers it the best nighttime show Disney has ever produced. 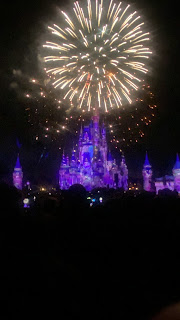 The point here is that I think Disney jumped the gun in trying to produce a new show simply to have it ready for the 50th Anniversary.  If anything, I would rather have had a "special attraction" type show that was to run only for the 50th (exclusivity is a big selling point in Disney's marketing) or keep HEA but add some kind of 50th Anniversary coda at the end, again making it more special and temporary.  Instead, Disney's press release essentially noted that Enchantment was here to stay, though of course they can always change their minds, based on guest feedback and such.  I have some thoughts on that I'll get to later as well.

So is Enchantment any good?  In a vacuum, the answer is yes.  It gives you what you want from a nighttime show, particularly one at the flagship park.  There's a lot to look at when it comes to the projections, including some of the current movies that took place after HEA came out, and lots of hit songs that spark a reaction (Frozen II's Into the Unknown is a good example here).  I do think Disney is a little too in love with Moana songs for these shows (both We Know The Way and I Am Moana are used) but they are powerful and emotional pieces.

I think some odd choices were made - there are long sections of songs that are done instrumentally, which I find takes some of the punch away from the emotional aspect.  And I don't love the voiceover/theme song You Are The Magic - it's fine for what it is, but pales greatly to Happily Ever After (the song), which is quite a banger on its own and fits in with the show more seamlessly.

Mostly my issues with this show remain the same as when I first wrote that post - it's largely unncessary to have made this change.  Enchantment is not really an upgrade on HEA in any capacity. The technology seems very similar (at least to my untrained eye) and it's missing a lot of the emotional power that HEA had naturally.  I think HEA had a lot of life left in it.  If Disney was worried about it looking dated (and I'm skeptical of this), there was no reason it couldn't be tweaked with new scenes added in rather than scrap the whole thing.

My hope is that Disney does indeed reverse course on this.  After the 50th, they can bring back HEA for a triumphant return.  Even if they have to update it (so that the songs don't conflict with Harmonious, a problem of their own creation), I think most fans would welcome it back.  As it stands, there's nothing WRONG with these new shows.  But there's something to be said for the old standbys - once Fantasmic makes its return to Hollywood Studios, that show goes back to the top of my best nighttime shows list.  I'm sure I'm not the only one, and I'm also sure that Disney can't be happy with that kind of attitude.

If you're going on a trip, make sure you see both Enchantment and Harmonious.  Especially if this is your first time, you won't have any connection to what came before and are likely to have your own special memories of these shows.  I just wish, especially in the case of Enchantment, that Disney wasn't so quick to move on from a classic.