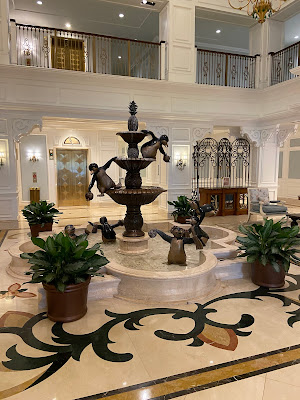 On a recent trip to WDW, we were fortunate enough to stay at Disney's Grand Floridian Resort & Spa.  This post will take a look at what it's like to stay there, including rooms, dining options and amenities.  We're also going to make a comparison to another resort in the area and discuss whether the experience is worth the cost.

For clarity's sake, I should note that we stayed at the Villas at the Grand Floridian, which is Disney's Vacation Club property on the same site as the hotel itself.  This is how many DVC properties are at this point, making them in many ways interchangeable from the hotel side.  From the outside, the buildings look the same, and you share all hotel amenities.  But in order to make the financial situation work, we rented DVC points through David's DVC Rental so that we could stay at this luxury resort without having to pay the (higher) price directly to Disney to stay at the hotel side.

There are only a couple of effective differences between staying at the DVC side of these resorts and the hotel side.  One involves housekeeping - if you're staying on points, you get a full service cleaning on your fourth day (and eighth, I believe, though we've never stayed that long).  It can be slightly inconvenient to not have a fully cleaned room each day, but you can always leave garbage outside your room and they will pick it up regardless of what day it is.  And if you need towels or anything or that sort, a quick call to guest services will be your friend.

The other noticeable difference is that each DVC villa has a kitchenette with a microwave and toaster.  I found that we didn't need to use these, but keep it in mind if you plan on staying in a villa, as you will have that available to you.  Beyond that, these rooms are largely similar to regular hotel rooms (though one other difference will be discussed below when we talk about the room itself).

In the case of the Grand Floridian, when you enter the grounds, there are signs directing you to either the hotel side or the villas.  The cast member at the gate had our Uber driver go directly to the villas when we arrived.  You can check in there or at the main building - in fact, with so much being done through the My Disney Experience app now, we didn't really have to talk to anyone at all but we arrived early so we checked in with a cast member at the villas. 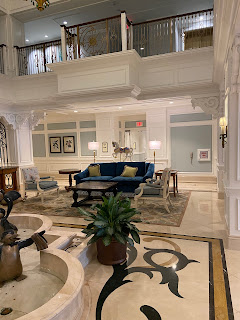 The Villas at the Grand Floridian is a six story building that serves as kind of a mini version of the main building.  Like the rest of the resort, it is built to impress immediately.  The resort on the whole is Victorian inspired, as that style of beach resort was built along the Florida coast in the late 19th and early 20th centuries.  The buildings all have white walls and red roofs, and were inspired by such other resorts as the Hotel de Coronado in California and the Belleview-Biltmore Hotel in Florida.  The buildings that house the rooms are named after the Florida Keys.

The Grand Floridian is a striking resort.  Our kids took notice of it as we passed by on the monorail during our last trip.  It is certainly an elegant property, and "grand" is a perfect word to describe it.  I've heard people say that it is imposing for families and that kids wouldn't like it, but I don't think that's true at all.  It certainly felt fancier than most places we stay, but we warmed up to it quickly.

As I said, the villas are a separate building at the southeast end of the property.  It isn't a very long walk to get to the main area where the rest of the buildings reside.  In fact, one of my favorite features of the resort is that the walkway between the villas and the main building is covered.  This was a blessing during the heat of the day and/or the Florida rain. 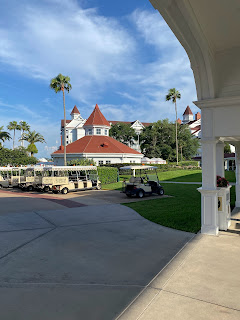 The main building is lovely, with a beautiful ceiling a birdcage-like elevator.  In true Disney fashion, the building always seemed to have something happening - we were there at Easter, and there was a huge display of hand designed Easter eggs in the lobby.  We also had a bit of Disney magic at one point, as there was a PhotoPass photographer set up on the second level who took dozens of pictures of my daughter (and some with my son for good measure) posed with the Cinderella slipper and book.  I had no idea this was here, so this was an unexpected delight when returning from the park for a rest.

The Grand Floridian is also a spa, as it notes in its name, and while we didn't spend any time there, we did visit Basin White, a small store on the second floor that sold soaps and other nice smelling products.  There are multiple gift shops here as well, including M. Mouse Mercantile across from Basin.  The second floor also has the most important thing - access to the monorail to Magic Kingdom.  The ease to get to that park (as well as the Transportation and Ticket Center and other resorts) is one of the key selling points of a resort like this. 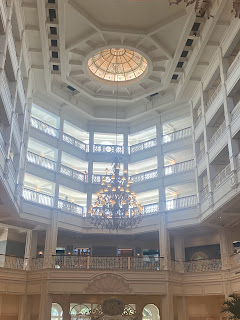 Let's talk about the room itself.  We stayed in a studio, which was 374 square feet.  It had one queen bed and one queen sized murphy bed pulldown. This is the other difference I mentioned about - most regular hotel studios have two queen beds, but the second bed in the villas has to be pulled down first.  No big deal to us, but worth noting.  It also has one more pull out bed under the TV stand, so it sleeps five.  Not many of the villas do, so this is important if you have a party that size and don't want two rooms.  For what it's worth, my kids LOVED having the pulldown bed as a sleep option.

Besides the beds, which take up most of the living space, there is the kitchenette as mentioned earlier, and the double bathroom - one room has a traditional tub and toilet, while the other has a fancier rain shower and the sink, with sliding doors in between and back to the room itself.  I liked the rain shower a lot, though I do question the decision to take up so much of the usable space here with bathrooms.  Some more floor space would have gone a long way.  Then again, if it were only two adults in this room, we would have had a usable couch, which probably would have made the room seem more spacious.  Having the two shower options also helped move things along before bedtime when we were all exhausted, so there is definitely a benefit there.

Like all DVC rooms, ours also had a balcony.  While we didn't spend an exorbitant amount of time in our room, the balcony is a great feature to have, especially early in the morning.  It's so nice to open up the door and just take it all in before a busy day.  Our room was on the corner, so we could look back at the main building behind us as well as the entrance to the lobby in front of us.  As a Disney geek, my favorite part was having the monorail track go right past the room.  That soft hum evokes a reaction in my soul but was never loud enough to be disturbing.  Not many resorts have this kind of atmosphere.

I haven't talked about any of the dining options here for a couple of reasons - one is that we didn't reallyavail ourselves of them in the time we had, except for the quick service Gasparilla Island Grill.  We needed at least one morning of Mickey waffles!  Pro tip - place your order at the registers in the middle of the restaurant and then wait for it to be ready on the far side.  This isn't very clear when you're there.

I also don't have the time to go into the other dining options, because there are simply so many of them at this resort.  There are at least five table service restaurants here, though not all are currently operating (including Victoria and Albert's, a AAA five diamond restaurant). If fine dining is your thing, staying here can be worth it for that alone. 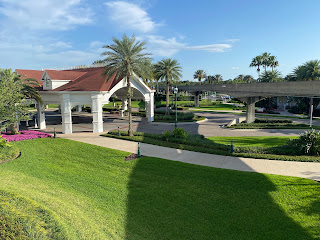 I did want to touch briefly on another resort in the same area - the Polynesian Villas and Bungalows.  First, we stayed there last year, so that one is pretty fresh in my mind (see this post for more details).  Also, while stylistically these two resorts are VERY different, there are a lot of similarities, especially when it comes to renting DVC points (spoiler alert - they are among the most expensive options).  But they are both on the Seven Seas Lagoon, which is the Magic Kingdom resort area, and both have a monorail station for easy access.  The Contemporary (and Bay Lake Tower) also have these in common, but the rooms there are a little smaller and only sleep four, so it's not an apples to apples situation.

The rooms at the Polynesian Villas are slightly larger, but have the same basic setup.  With all else being equal, which is "better"?  Obviously that's a matter of taste, so I can't give a definitive answer.  Our personal preference was the serene natural beauty of the Polynesian, but we loved both of them for different reasons.

One thing that might objectively tip the scales in the Polynesian's favor is the monorail situation.  As I said, both resorts have monorail stations that are easy to access.  However, one thing I noticed during our week is that the monorail isn't always as fast as we wanted it to be, especially if you have to change at the TTC to go to Epcot.  One advantage the Poly offers is that you can walk directly to the TTC and get on the Epcot monorail without having to make all the stops around the Lagoon and then switch vehicles.  Similarly, you can take the express monorail from the TTC to Magic Kingdom.  While I enjoy the leisurely pace of the resort line, it's much more efficient to go directly where you intend to go.  Plus the villas at the Poly are basically as close to the TTC as they are to the Poly monorail station so it makes a lot of sense to just walk there instead.  When in doubt, better monorail access wins.

Ultimately, the question of whether it is worth it to stay at the Grand Floridian (or the Poly, etc) comes down to your own budget and tastes.  Renting DVC points is definitely the most cost effective way to do this, and is truthfully the only way we could have afforded to do so.  There's also the fact that currently deluxe resort guests can take advantage of Extended Evening Hours, which is a fantastic perk.  It remains to be seen if this is continued to be offered, but as of now, this is the best way to beat crowds at the parks.  If anyone is on the fence, I would recommend taking a quick monorail trip to the Grand Floridian and spending some time soaking in the atmosphere.  If you enjoy it, consider staying there on your next trip.