Harmonious Live! to Livestream on Disney Plus 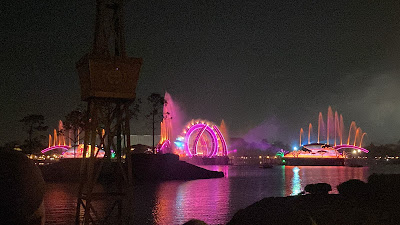 To help celebrate World Music Day (I guess this is a thing?) Disney announced today that it will livestream a performance of Epcot's nighttime spectacular, Harmonious, on Tuesday June 21 at 9:00 ET. (and available for replay starting the next day). This isn't just any performance of Harmonious, though - it will feature "a culturally diverse group of 240 artists from all around the world, all performed by a live orchestra and ensemble of international vocalists."

I wrote a review of the new nighttime spectaculars a while back and was kind of down on Harmonious.  I revised that opinion a bit after seeing it in person.  And while I still don't think this is the awe-inspiring phenomenon that Disney wishes it were, it's still a worthy show in their canon.

I'm also really excited for this livestream.  I love live music in all its forms, and using a live orchestra and vocalists here is a great idea to inject some more life into this show.  It really gives it a unique and special feel, and should really bring out the best in this show.  They just announced this today and they're already building a stage in front of the lagoon. Who says they can't do things quickly?

One other aspect of this that I like is that it will be livestreamed on Disney Plus.  That service has been good for many things, but live shows/performances has not been one of them (so far).  It was announced that Dancing With the Stars will stream live exclusively on Disney Plus so this looks like something that Disney is interested in pursuing in the future.  Harmonious Live! is a good way to test this out.

I also like that this show is being hosted by two performers who have both played iconic roles in Disney films - Idina Menzel (Elsa from Frozen) and Auli'i Cravalho (Moana).  It's not really necessary to have a "host" for this show, but I like that they went all in here. It gives the performance a more important feel.

I don't have much more commentary here, but as I said, I like everything about this.  My wish is always that there was more park content on Disney Plus and this is a good addition to their limited catalog.  Hopefully enough people tune in to make it worth their while in doing things like this in the future.